If you happen to be in Canada on a clear night, look to the stars and maybe you’ll see it: a strip of light stretching from east to west, all the way from the banks of Hudson Bay to the fjords of British Columbia.

Is it a wayward piece of the aurora borealis? Or maybe a plane’s contrail? A rarely seen strip of a proton aurora? Or is it a comet’s tail?

Actually, it’s none of the above. Scientists are still working to figure out exactly what they’re dealing with.

And until that day, they’re going to call it Steve.

What sets Steve apart is not just its charmingly banal name. It’s also the way it has been — and is still being — discovered, said Eric Donovan, a professor of physics and astronomy at the University of Calgary.

Reykjavik Briefly Swaps Its City Lights for Northern Ones SEPT. 29, 2016

Chasing the Northern Lights in Alaska JAN. 3, 2014
The story started with a group of Canadians who were enthusiastic about finding and photographing the most stunning displays of the aurora borealis, or northern lights. They formed a Facebook group called Alberta Aurora Chasers to share information about the best and brightest displays. A few years ago, some began to notice that Steve — a strip of light that appeared a bit farther south than the northern lights — was something special. 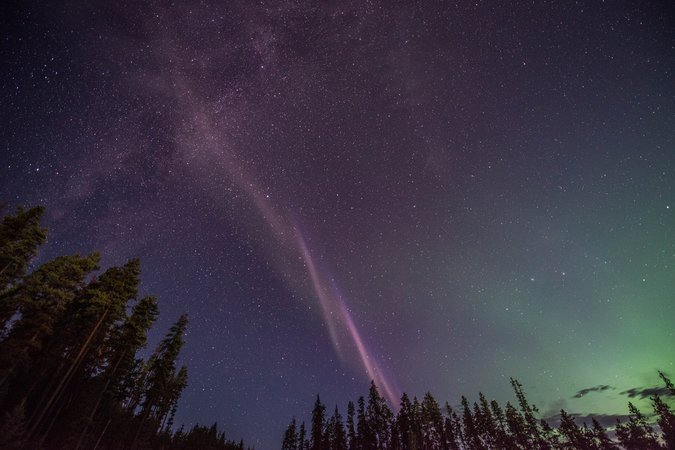 After that, scientists began to take notice.

“The really cool thing about this is the social media providing a nice bridge between the scientific community and these amateurs, who are incredibly talented observers of the night sky,” Dr. Donovan said.

He explained that Steve is a strip of ionized gas moving through the air at about four miles per second, with temperatures as high as 10,800 degrees Fahrenheit — as hot as the earth’s core. It is about 16 miles wide and thousands of miles long, flowing from east to west across Canada.

Photographs of the phenomenon, most of which show Steve as a glowing ribbon of neon light, have captivated aurora borealis enthusiasts in Canada and far beyond.

But to the naked eye, Steve doesn’t look like this. It usually appears as an ethereal wisp of white that pales in comparison to the northern lights, faint enough that photographers in the Facebook group originally mistook it for the contrails of a plane.

But soon enough, they started looking at Steve through their camera lenses. It was only then — with help from slow shutter speeds and photo editing to dial up the color saturation — that the aurora enthusiasts could show Steve in all its pink, purple and green glory.

“We could see that it was self-illuminated,” said Chris Ratzlaff, a photographer who is the Facebook group’s administrator. “Not like a contrail, which is lit from below.”

For a while, the Alberta Aurora Chasers assumed they were looking at a proton aurora, which is made of energized protons from the magnetosphere (as opposed to the energized electrons that make up the northern lights as we see them). But last year, a group of the aurora chasers went to hear the aurora borealis expert and NASA scientist Elizabeth MacDonald speak at the University of Calgary.

After the event, they retired to a nearby pub with Dr. Donovan, where a brief debate broke out. They insisted they had taken photographs of the proton aurora. Dr. Donovan doubted it, since that phenomenon is not visible to the human eye.

“I said, ‘Why don’t you show me?’” Dr. Donovan said. “They pulled up this beautiful photograph of this thing. And I’m like, ‘I don’t know what that is, but it’s not the proton aurora.’”

At Dr. Donovan’s urging, Mr. Ratzlaff — who takes his science seriously — knew he could not erroneously call it a proton aurora any longer. So the next day, he came up with the name Steve.

He admitted, somewhat reluctantly, that the idea came from a scene in the 2006 animated movie “Over the Hedge,” in which a group of forest animals are confronted with the sudden appearance of a towering row of shrubs.

“I would be a lot less afraid of it if I just knew what it was called,” says a computer-generated porcupine. A red squirrel pipes up: “Let’s call it Steve. It’s a pretty name.” And so they do.

Dr. Donovan’s next step was to gather data on the phenomenon, which he did with help from Swarm, a constellation of satellites run by the European Space Agency.

In orbit about 250 miles from Earth’s surface, the three identical satellites measure “magnetic signals that stem from Earth’s core, mantle, crust and oceans, as well as from the ionosphere and magnetosphere,” according to the agency.

In July 2016, Swarm collected data on Steve’s location, temperature and velocity that complemented the careful documentation that the aurora chasers were delivering from the ground.

“This is not something you anticipate when you build a mission,” said Roger Haagmans, Swarm’s mission scientist. “It just happens, and then you try to provide the right data to the community.”

That’s how Dr. Donovan got his data on Steve’s temperature and velocity, but other questions remain, like why the stream exists in the first place, and what makes it so hot.

In a matter of months, he said, he hopes to publish a study that will explain exactly what Steve is.

And once that is figured out, the phenomenon might get an official name — but, Mr. Ratzlaff said, the public isn’t likely to forget the original label. “I think the name Steve is here to stay.”

Steve looks somewhat similar to the aurora, but with different color (somehow similar maybe to the difference of the rainbow colors.)
Although the aurora is different of course from the rainbow.

About the proposed heat:
The layers of the atmosphere are arranged in alternating temperatures:

The aurora is manifested in the Thermosphere where the temperature is very high (burning in fact.)

Pink are the stronger ones from what i remember....

The best is when you see the pink stringers (what i call them) inside a matrix of green Aurora Borealis all the while the Northern Lights look like giant curtains in the sky that appear to be swaying in the "wind"...
You must log in or register to reply here.
Top Bottom