Super mayors could be elected on October 24

Super mayors could be elected on October 24
While always important, the fall municipal election has special significance this year thanks to the Doug Ford government's 'strong mayors' legislation.

Voters will or could be electing super mayors on Oct. 24.


While always important, the fall municipal election has special significance this year thanks to the Doug Ford government’s ‘strong mayors’ legislation.


The mayors of Toronto and Ottawa now have the authority to hire senior staff, create budgets and even veto some council votes.

And the Ontario government is considering giving all mayors extra powers.

“The Strong Mayors, Building Homes Act provides Toronto and Ottawa with the additional tools needed to advance provincial priorities,” Victoria Podbielski, a spokesperson for Ontario Municipal Affairs and Housing Minister Steve Clark, said in a statement. “Right now we are focused on getting it right in Toronto and Ottawa where one-third of the growth is expected to take place over the next 10 years. Addressing housing supply issues in these communities is critical and we understand that municipal councils play a crucial role in determining the housing supply.”


The Ford government was re-elected with a strong mandate to create housing and plans to build 1.5 million homes over the next 10 years, she said.

“In the future we will look towards other municipalities that are shovel ready, committed to growth and cutting red tape,” Podbielski said. “In the coming months, we’ll have more information on how these tools will be expanded to other communities so more municipal leaders can help build Ontario.”

Voters can search their local municipal website for a full list of certified candidates and individual candidate’s websites for more information.

Would-be mayors adore a vacuum, so the announcement in June by Hamilton Mayor Fred Eisenberger that he wouldn’t seek re-election attracted nine challengers.

The former president and CEO of the Hamilton Chamber of Commerce, Keanin Loomis brings a business background to the race.

John Tory is seeking a third term as a well-known incumbent.

But with many issues facing the city – housing, crime and gridlock – 30 challengers are hoping to knock him out of his position.

With five terms as city councillor, Sandra Yeung Racco is his most high-profile challenger for the job.

A lot of eyes are on the Brampton race where incumbent Patrick Brown seeks re-election after bowing out of the federal Conservative leadership campaign.

A tumultuous term of council has left members sharply divided into two camps with both sides hoping for fresh faces and a fresh start come Oct. 24.

Of the five challengers, lawyer and a former city staffer and whistleblower Nikki Kaur has received the most attention for her campaign to clean house. 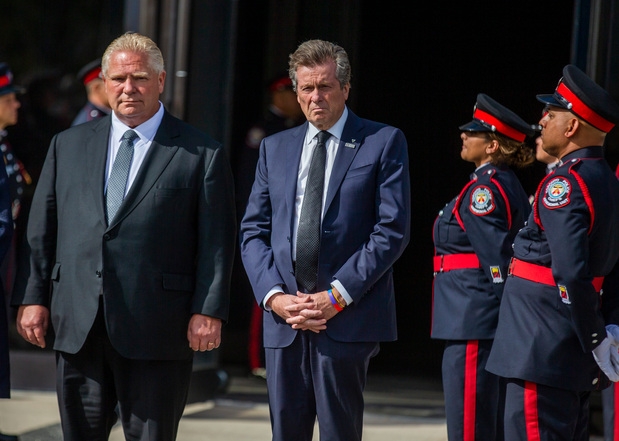 Super mayors could be elected on October 24

While always important, the fall municipal election has special significance this year thanks to the Doug Ford government's 'strong mayors' legislation.