Article content
After being hurled hundreds of years into the future to save life across the universe, the Discovery crew, led by the series’ first Black woman ( Sonequa Martin-Green’s Michael Burnham ), is facing its biggest challenge yet.


“Today we seek to understand a threat like none our galaxy has faced before,” Burnham says in the trailer. After solving the mystery behind The Burn, Season 4 finds the Discovery team squaring off against a gravitational anomaly that could end Federation and non-Federation worlds. With billions of lives at stake, different factions must unite to avert intergalactic annihilation.

“We don’t know anything about it at the start. We don’t know what its impact will be, just that it will be significant,” showrunner and co-executive producer Michelle Paradise ( The Originals ) teases in a video call from New York Comic Con.

Article content
While the new season isn’t about a pandemic, it draws inspiration from the challenges humanity has faced over the last 20 months.

“Something of that size and threat level brings about a lot of uncertainty,” Paradise adds. “That’s one of the big themes we’re exploring this season. What does it mean to live in a world of uncertainty? What does that mean for our characters as a family? I think it will test them all and help them grow in new ways.”

Debuting in 2017, the Toronto-shot Discovery was the first new Star Trek show since Enterprise went off the air in 2005. Originally set 10 years before the adventures of William Shatner’s Kirk and Leonard Nimoy’s half-human/half-Vulcan on TOS (The Original Series) , Discovery added new characters to the franchise. But with Burnham cast as the stepsister of fan favourite Spock (Ethan Peck) and Anson Mount as Captain Pike, the show maintained ties to the original canon before jumping far ahead into the future last season.

Article content
“As a fan of Star Trek , I love that we’ve had some fresh snow to play in,” Paradise says.

“I love having the connective tissue to the franchise,” Martin-Green, 36, adds. “Everything that we’ve seen thus far is there. It’s a part of our story and a part of our history. We still have what came before (us) and we’re honouring that.”

Article content
Looking farther ahead, a fourth Trek movie is due out in 2023 with WandaVision director Matt Shakman at the helm.


“I love where I’ve been placed in this ongoing story,” Martin-Green says.

This season, Burnham is slipping into the captain’s chair for the first time. It’s a role that will find the character having to lead the Discovery crew in decisively bold new ways.

“The threat (she faces) is unfathomably dangerous and brand new,” Martin-Green says. “The uncertainty is like a pressure cooker. Everybody is going to be going through it and there’s no stone left unturned.”

But Paradise promises Trekkies a ride that encapsulates a range of emotions. “There’s also action, adventure, love, humour, care, hope, optimism,” she says. “It’s a lot of things over the course of the season.”

Article content
Having watched her character grow and change and expand in a way that can now fit the chair, Martin-Green says there are still some new things to learn about the heroine.

But the challenges she faces this season will continue to highlight Burnham’s evolution away from someone who was driven by impulse.

“I think Burnham needed to learn that her decisions can’t be made in a vacuum,” Martin-Green says.

“Even if you have the right intentions and you’re coming from a pure place, you still have to understand you’re just one of a whole. I love that Burnham’s urges have grown from a self-fulfilling place to a collectively fulfilling place. To a place that services the whole.”

When Star Trek: Discovery returns for its fourth season this week, the fabled sci-fi franchise will be boldly going in a new direction.

Uuum that program is over..

She gets her wings and travels to the future.. yawn

Can the show that somehow survived the ridiculous hamming of William Shatner survive the fact that it ran out of ideas decades ago?

Find out! On STAR TREK: WHATEVER!
Reactions: B00Mer

Tecumsehsbones said:
Can the show that somehow survived the ridiculous hamming of William Shatner survive the fact that it ran out of ideas decades ago?

Find out! On STAR TREK: WHATEVER!
Click to expand... 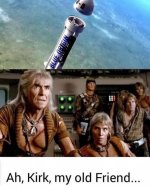 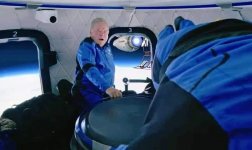 The biggest threat. Yeah they'll be expected to pretend they're professional military people instead of acting like a bunch of overly-emotional 6 years old that NO ONE in their right mind would go on ANY missions with.
Seriously, are the scripts written by 14 yr olds or something?
Reactions: B00Mer
You must log in or register to reply here.
Top Bottom