You'll either love them or hate them: sausage maker invents Marmite bangers


Marmite and Bovril fans can choose between new sausages made with the two rival savoury flavours.

Both versions have a "significant but not overpowering" taste, the firm said. 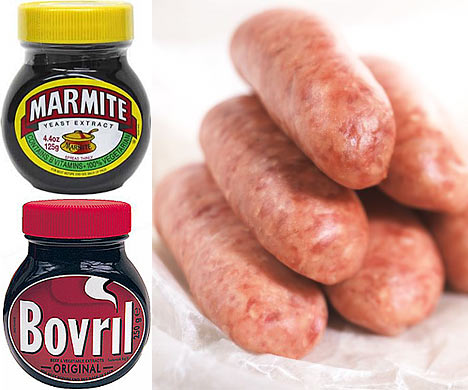 Marmite sausages will have a 'significant but not overpowering' taste


The Marmite sausages contain 5.5 per cent of the savoury spread plus 78 per cent pork. The other version contains 3 per cent Bovril (enjoyed by generations of British fans at the football) and is made from a mix of pork and beef.

Jane Woodward, sales and marketing controller at Essex-based Broad Oak, said it had taken around two years to reach an agreement with Unilever which owns the Marmite and Bovril brands.

"Once you've eaten the product you have the reminiscence of the flavour afterwards. It's not overpowering - you know you've eaten Marmite but it doesn't burn your tongue. It is a delicate flavour," she said.

"I think Marmite will be most popular purely because of the brand awareness of it."

Mary Carmichael, brand news editor at trade magazine The Grocer, said: "Marmite and Bovril are such established brands that it makes perfect sense for a relatively new producer to try and get the benefit of their fame and the British public's affection for them."

According to Unilever, the Bovril beef drink was invented in 1886 by Scotsman John Lawson Johnston.

Marmite is a savoury spread made with yeast which first launched in the UK in 1902, the firm said.

I so love marmite, but, in my sausages? Hmmmm... Not sure about that one.

Libra Girl said:
I so love marmite, but, in my sausages? Hmmmm... Not sure about that one.
Click to expand...

Scrambled egg on toast with some marmite on - Breakfast of champions.

Phil B said:
Scrambled egg on toast with some marmite on - Breakfast of champions.
Click to expand...


Nasty man! It sounds so tempting, but I can't eat eggs. lol

Bang on for Bangers ??? You are a champion if you can handle that gastronomical delight to start any day.

I'd probably crawl back under the covers !

Apologies - just seen in the bananas post about your egg intolerance.

Phil B said:
Apologies - just seen in the bananas post about your egg intolerance.
Click to expand...


Gosh, no need to apologise Phil B. lol. Your breakfast combination did sound delicious.
You must log in or register to reply here.
Top Bottom