An Oxford couple have been spared jail after being found guilty of sending money to their son while he was living under Islamic State in Syria that could have been used to fund terrorism.

They knew they were breaking the law, the Old Bailey jury was told. In one message, Lane told her son: “I would go to prison for you if I thought it gave you a better chance of actually reaching your 25th birthday.”

The couple refused to believe that Jack, a Muslim convert, had become an extremist, and sent the money because they believed he was in mortal danger. The prosecution argued that the couple “did not want to hear the truth” and “turned a blind eye to the obvious”.

The judge Nicholas Hilliard QC sentenced the couple to 15 months’ imprisonment, suspended for 12 months. He said that in their love for their son they had lost “sight of realities” even though “the warning signs were there”.

The jury was not told that Jack was believed to be in the custody of Kurdish authorities, accused of being a member of Isis. In an ITV interview from prison in February, Jack, who has dual UK and Canadian citizenship, said he doubted officials from either country would help him because “no one really cares”.

In a statement outside court, the couple said: “We have been convicted for doing what any parents would do if their child was in danger.” There was no suggestion during the trial that the money they sent was used for terrorism, they said, adding that they felt badly let down by the police and the government.

They said they had pleaded with the government to help get Jack back to the UK. “Having escaped from Isis, he is in limbo,” they said. “The heavy price we paid today is an indicator of the love we have for our children. We are committed to help Jack return home.”

His parents initially sent him £223 in September 2015. They then attempted to send another £1,000 in December, claiming Jack, who has obsessive compulsive disorder, was trapped in Raqqa and needed the money to escape. Those transfers were blocked.

The jury deliberated for almost 20 hours before finding them guilty of the September charge but not guilty of the December charge. They could not reach a verdict on a third charge, which will remain on file.

Jack converted to Islam aged 16 and travelled to Syria in 2014, when he was 18. The couple paid for his return flight to Jordan in May 2014, believing he was on a “grand adventure” learning Arabic, despite one of Jack’s friends warning them about his growing extremism.

Jack then moved to Kuwait and married in Iraq, before he rang his mother to say he was in Syria in September 2014.

Wanting to help Jack was not a defence, the prosecutor Alison Morgan QC told the jury. “Once Jack Letts made the decision that he did to follow Islamic State to Syria and live in Islamic State territory, and to defend its ideals and goals, the normal parenting rules for what you can do to help your child change.”

Jurors heard that Jack said “the most appalling things” on social media and in messages to his parents. In one Facebook comment, underneath a photograph posted by a former schoolfriend with young British army comrades, he wrote that he would like to “perform a martyrdom operation in this scene”. He said he wanted to behead the same schoolfriend, and warned British police who had raided his parents’ home to “die in your rage soon you’ll be the one being raided”.

His parents have made repeated attempts to get the UK and the Canadian governments to help get Jack out of Syria, including organising protests and staging hunger strikes to draw attention to their case.

DCS Kath Barnes said investigators had “huge empathy” with the couple but it was not for them to choose when it was “OK to break the law”.

Jenny Hopkins, of the Crown Prosecution Service, said it was natural for parents to care for their son, but the couple had been warned “multiple times”. “They chose to ignore that advice and at one point set up a fake identity to send him money,” she said.

The son himself sounds like he's done some thinking and knows his life is pretty much over.One error in the story-The Canadian gov't Is Not going to let him into Canada not in 10,000 years he has no connection here and it would be political poison to be seen to be sympathetic to his case.

Jack Letts, Islamic State recruit: 'I was enemy of UK'

ack Letts, who left the UK to join the Islamic State group as a teenager, has said he had been an "enemy of Britain".

The Muslim convert, who is in custody in a Kurdish jail, admitted he was once ready to carry out a suicide attack.

The BBC interviewed the 23-year-old in October but it can only be reported now after his parents were convicted of funding terrorism by sending him cash.

The Home Office did not comment but has previously said it would try to block IS recruits hoping to return to the UK.

The interview is the fullest account yet of the Briton's time with IS in Syria, and Jack Letts said he was not speaking under duress.

Dubbed "Jihadi Jack" by the media, he converted to Islam aged 16.

Two years later, in 2014, he dropped out of studying for his A-levels at a school in Oxford, moved to Syria and joined IS - the jihadist terror group which became known worldwide for its brutal mass killings and beheadings.

He married a woman whose family were influential in the group in Fallujah, Iraq. He had a child, who he has never seen.

n 2017 he left IS, but was captured and is in a Kurdish-run jail in northern Syria.

The Briton, who has not been stripped of his UK citizenship and is a dual Canadian national, agreed to speak to the BBC, saying he wanted to come clean about his role in IS.

'I did what I did'
Reporter Quentin Sommerville, who interviewed the IS recruit while Kurdish security forces were present, said there were gaps in his story.

Challenged on whether he was a traitor, the IS fighter replied: "I know I was definitely an enemy of Britain.

Pressed on why he abandoned the UK to join the jihadist group - which has carried out terror attacks across the world - he said: "I thought I was leaving something behind and going to something better."

He said his home life had been comfortable, adding: "I had a very good relationship with my mum, especially, and my dad as well, actually.

"I used to work with my dad. He was a farmer... I used to love actually working with him. I had a very good relationship."

He said he thinks the decision to travel to Syria was a "weird combination of thoughts" and "weird sort of confusion".

"I thought it was some sort of morality actually at the time," he said. "Why do I have this nice life, and others don't? And then, on top of that, the idea of it being an Islamic state and it's actually your duty to do this.

"I think it was probably just a very emotionally-driven period of my life. I'm just glad that I didn't die."

'I wouldn't give me a second chance'
The former IS member said the group used to "encourage you in a sort of indirect way" to put on a suicide vest. He said he made it obvious to militants that "if there was a battle, I'm ready".

He said at the start he loved living in Raqqa. He fought on the frontlines and was badly injured in Iraq.

One of the main reasons he left IS, he said, was because they started to kill people who he knew were Muslims.

"I didn't have a full plan. I thought I'd just get to Turkey and ring my mum, and just be like, 'I want to meet you somehow'."

'Poster boy'
His parents, John Letts, 58, and Sally Lane, 57, faced trial, accused of sending or trying to send their son money after he had joined IS.

On Friday, they were found guilty of one charge of funding terrorism by sending £223 in 2015. They were cleared of sending him a further £1,000 and the jury could not reach a verdict on a third charge related to an attempt to send £500.

When told that there was very little appetite in the UK to give him a second chance, Mr Letts said: "It's not like I'm appealing to the British public to give me a second chance.

"If I was a member of the British public, I wouldn't give me a second chance probably."

Challenged that his recruitment to IS - as a Westerner who travelled from Britain - was a rallying cry for the terror group, he said he realised it "had more meaning" than for a Syrian recruit, and added that IS used him as a sort of "poster boy".

"The fact that I came from England, et cetera, I understand that it made a big difference."

Although admitting he fought for IS, he said he did not believe he killed anyone.

As a dual national, he has been in touch with Canadian authorities and they are believed to be considering allowing him to leave Syria for Canada.

The Home Office did not comment on the case, but believes that anyone who travels to Syria is putting themselves in danger and could pose a national security risk to the UK.

Home Secretary Sajid Javid has previously said he would "not hesitate" to prevent the return of people who travelled to support IS.

In an interview with the Times, Mr Javid said that a range of measures were available to "stop people who pose a serious threat from returning to the UK, including depriving them of their British citizenship or excluding them from the country".

Jihadi Jack on his way 'home'

Excuse Me Please I have to go and puke.
Reactions: petros

Excuse Me Please I have to go and puke.
Click to expand...

The former British-Canadian dual citizen, who was born and raised in Oxford, U.K., had his British citizenship revoked three years ago, leaving the Canadian government as his only viable means of escaping. 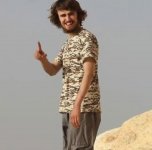 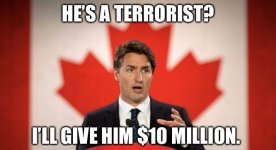 Former CSIS analyst Phil Gurski told CBC News Network on Thursday that he doubts any of the adults returning would face justice for any crimes they may have committed.

"The witnesses aren't here, the evidence isn't here," he told host Natasha Fatah. "As a Canadian citizen, I'm outraged that people are going to get away with it."

http://www.cbc.ca/news/politics/court-repatriate-canadian-syria-1.6721524
This isn’t anything new either. These stories below are all from 2019: 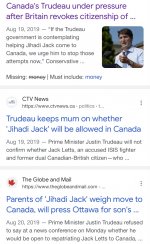 Jack Letts was born in Britain in 1995, and beyond some trips to Canada to visit relatives, has never lived here. He was raised in the U.K., educated in the U.K., converted to Islam as a teen in the U.K., and went to Syria in 2014 at the age of 19 because he rejected life in Britain.

He is able to claim Canadian citizenship because his father is a Canadian who moved to Britain decades ago. His connections to this country, beyond asking for consular assistance, are negligible at best, but since the British government stripped him of his citizenship there in 2019, Letts may only be recognized as a Canadian now.

Harper set things in play so that Canada wouldn’t have to take Jihadi Jack, but Trudeau scrapped that, & here we are.
You must log in or register to reply here.
Top Bottom