“A woman wanted to sit down and he wouldn’t remove his back and allegedly stomped on her foot — that part’s off-camera,” said Infamous 6ix CEO Tim Matheson, who calls the cards “municipal engagement.”

“Someone started filming and caught the altercation. He became the TTC Leprechaun because of the green shirt, the bowler hat the goatee. We see the bag he was protecting very much as his pot of gold.”

Joining the TTC Leprechaun are the capybaras — the fuzzy Bonnie and Clyde animals who escaped from the High Park Zoo during a transfer in May 2016 and ended up being on the lam for a month, making international headlines.

There’s also a new card for Crane Girl, otherwise known as Marisa Lazo, 23, who made the capricious youth decision of climbing a crane nearly 100 metres high after a night of heavy drinking on Apr. 26, 2017.

After reaching the top, she snapped a few selfies and was unable to climb down, instead sliding “uncontrollably” down the cable and ended up sitting on the hook block until she was rescued the next morning.

The first set came out in November with some controversy when it included a card of Chair Girl — whose real name is Marcella Zoia — depicting an illustrated blonde-haired woman wearing a black leather jacket, holding a chair, which was sold in a pack of seven cards of other Toronto characters, including Ikea Monkey, Corona Rapper and Chainsaw Brothers.

But then the company received a cease-and-desist letter issued on Dec. 3.

Zoia’s manager, Reza A. of AnRMedia, told the Sun in late December, the issue was that the drawings have a close physical resemblance to Zoia who did not give permission for her likeness to be used on the trading cards.

But Matheson claims he hasn’t been served with any further legal action.

“They didn’t follow up,” he said. “I think their bark was louder than their bite.”

Reza A. responded to the Sun this week that “we are not to discuss the lawsuit until it moves forward. Due to COVID, the courts have been slow but I can keep you updated.” 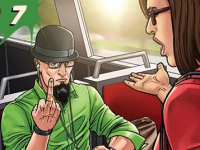