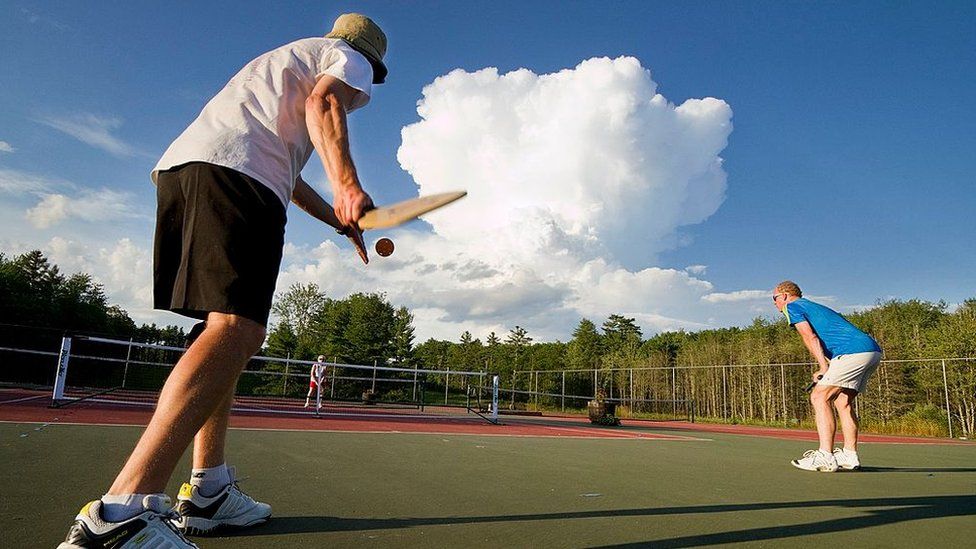 If you've ever dinked in the kitchen, you probably already understand the allure of one of America's fastest growing sports. And if you haven't, you'd better paddle-up because sooner or later somebody is going to invite you to join a game of pickleball.

According to the Sport and Fitness Industry Association (SFIA), pickleball participation grew by a whopping 21.3% last year as Americans looked for new ways to stay active during the pandemic.

That figure is part of a five-year trend that has seen pickleball evolve from its origins as a backyard knockabout game to a sport with Olympic aspirations.

"It's growing like crazy - in other parts of the world too," says Stu Upson, Chief Executive of USA Pickleball, the sport's national governing body. "There are 37 countries that are part of the International Pickleball Federation.

That's more than double where it was 18 months ago."

Pickleball is a mash-up of tennis, badminton and ping-pong. It can be played by singles or in pairs, either indoors or outside. The aim, like many racquet sports, is to get the ball over the net and prevent your opponent from hitting it back.

The kitchen refers to the no-volley zone and dinking is a soft shot that sends the other player scrambling towards the net to reach the ball in time.

The game was invented in 1965 by US Congressman Joel Pritchard and his friend Bill Bell during a summer vacation on Bainbridge Island, Washington. It was an attempt to entertain bored children using whatever equipment came to hand. A decade later the first official pickleball tournament was held. 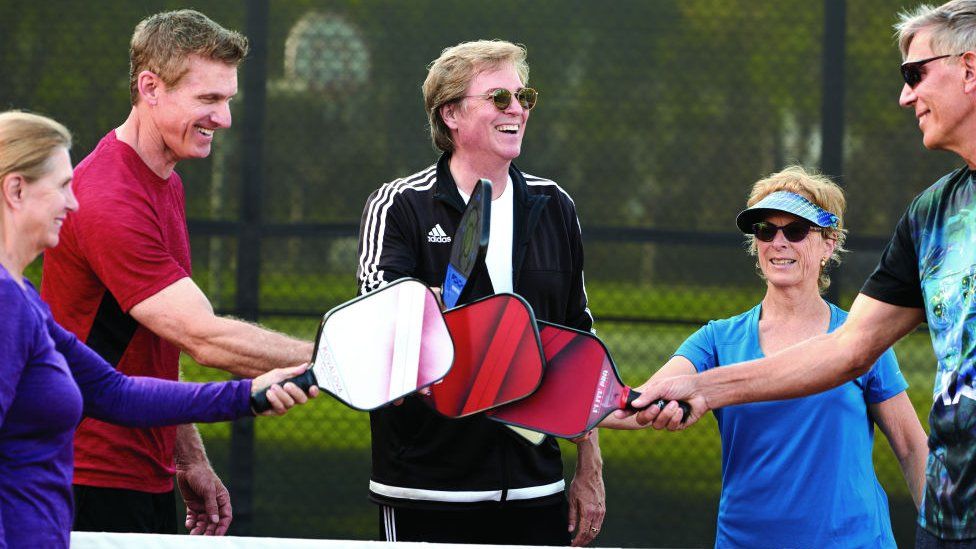 Fans say the game is addictive, partly because it's easy to play but still challenging as skills improve.

"Unlike tennis or golf where you need to take lessons just to become adequate, you can get on a pickleball court and within an hour or so you won't be terrible," says Mr Upson.

And it's sociable, a big bonus during the pandemic when people have been struggling to get together safely. As gyms and other recreation centres closed, pickleball became a popular outdoor alternative.

"Pickleball players love other pickleball players," says Barbara Gulino, 62, from New Hampshire, who admits to hunting down games in unfamiliar places, lured by the sound of a perforated plastic ball hitting the sweet spot in the centre of a paddle.

"I remember one time my husband and I were in Florida, and we were walking down the street and we could hear the sound of a pickleball. We know that distinct 'pop'. And there we are looking through the hedges, pulling them apart and saying, look - pickleball people! There's a game going on!"

Her husband Len, 65, used to play tennis but became a pickleball ambassador five years ago to help raise awareness of the game. He organised some of the region's first tournaments, which attracted people from all over New England, in the north-eastern part of the US.

"The biggest challenge is staying on the court," he says. "It attracts an older group and a lot of people get a little bit too enthused, twist and ankle, tweak an arm, knees start going - but it's a wonderful game."

At the North Conway Community Center in New Hampshire, executive director Carrie Burkett says the two indoor courts have been able to reopen with restrictions and she's struggling to keep pace with demand for sessions.

But before the pandemic shut us down, we had 200 participants in our adult programmes and at least 150 of them were pickleball players."

Sessions now have to be limited to 10 people at a time - down from 25 - and players undergo health screening and must wear a mask to play.

"Most of our participants are over the age of 65 so we really wanted to look into how we could do it safely," says Ms Burkett.

Mary Henderson, 67, is a beginner but enjoys the game as much as tennis.

"I played all summer (outside) when we could take our masks off.

It's a little difficult to play (indoors) with the mask on but it's worth it," she says. 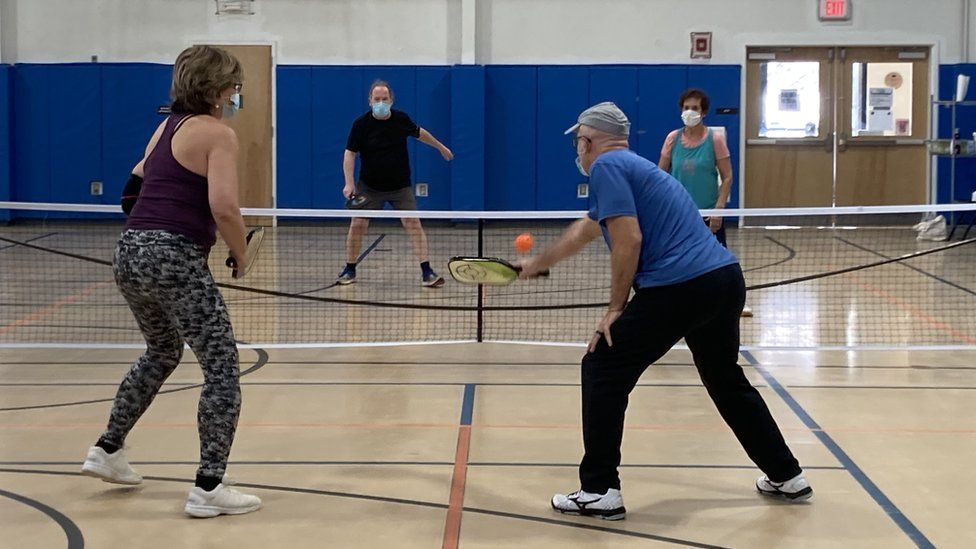 Barbara and Len Gulino have developed a love for the sport

While pickleball is particularly popular among older people, younger people are now taking up the game and are most likely to become professional players, says Mr Upson.

"We would love to become an Olympic sport," he says. "But to be recognized by the International Olympic Committee you need at least 70 countries with (pickleball) federations so we have a way to go. I think it's reasonable that pickleball could become an Olympic sport - but it's not going to be in the next four or eight years."

There are an estimated 68 million so-called zoomers, or Generation Z in America (people born between 1997 and 2015) and they've been driving growth in all racquet sports. According to the SFIA, an impressive 22.4% of zoomers played some form of racquet sport last year.

And although many activities, such as team sports became difficult to access or were shut down because of the pandemic, an extra 8.1 million Americans became more active last year, with pickleball, hiking, and cycling leading the way.

While pickleball is growing fast, its 4.1 million players are still a fraction of the 21.5 million who play tennis. But perhaps both games should be looking over their shoulder at the latest upstart - pop tennis, which is played in a cage.

There are barely two million pop tennis participants so far, but growth is already topping 30%, says the SFIA.

It's clear that traditional racquet sports are no longer the only games holding court in the US. 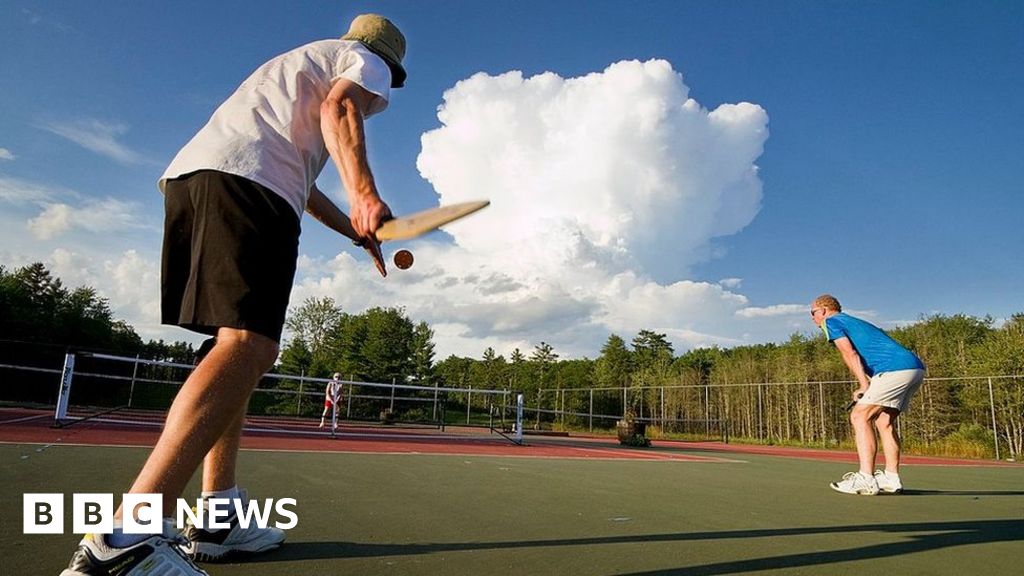 Pickleball - a mash-up of tennis, badminton and ping-pong - saw a surge in participation last year.
www.bbc.co.uk
You must log in or register to reply here.
Top Bottom