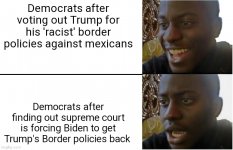 President Trump: No Choice But To Run Again​

The 45th president recently dropped hints about a potential White House bid in 2024. In an interview over the weekend, Donald Trump said it’s getting to a point where he has no choice but to run for president again.

Trump then took aim at Joe Biden by saying he’s an incompetent person as the leader of the country. While blasting the current administration, he pointed out that though they preach being inclusive, they are very “dividing and divisive.”
.
The 45th president also touched on the messy U.S. pullout from Afghanistan. He warned that “our country is far more susceptible to attack by outside terrorist groups than ever before.”

In a statement Monday, Trump says our enemies all over the world are inspired by what happened in Afghanistan and our nation is no longer respected after Biden’s “pathetic” and incompetent withdrawal. He asserted it will take a long time for the U.S. to gain it’s reputation back and pointed out the Taliban is now in a far better position than they were 20-years ago.

Trump also said the loss of Afghanistan not only emboldens foreign terrorist, but also Antifa and Black Lives Matter. He then called out the mainstream media for not adequately covering those groups.

Meanwhile, Trump is planning to return to Georgia for a ‘Save America’ rally. He will host the event on September 25 at the Georgia National Fairgrounds in the city of Perry.

The rally will feature three Republican candidates that Trump is supporting ahead of next year’s midterm elections. He has endorsed state Sen. Burt Jones for lieutenant governor, former NFL star Herschel Walker for the Senate and Rep. Jody Hice for Georgia secretary of state.

This comes as Trump has remained focused on Georgia after he claimed he lost the state due to election fraud.
You must log in or register to reply here.
Top Bottom