The first-time candidate often encountered anti-Black racist messages and threats in his former role as executive director of Hamilton Center For Civic Inclusion, he said in a phone interview. His campaign planned to regularly check on the ad in anticipation of similar backlash.


“Now running for city council, I knew that it will probably happen again, and lo and behold, it happened,” he said. “It didn’t surprise us.”

The racist sticker on Damptey’s ad is one of three incidents being investigated by Hamilton police’s hate crime unit related to election candidates.

With voting day set for Monday in municipal and school board elections across Ontario, some candidates are facing intense, hostile rhetoric — some in-person and some online — as they put their names forward on local ballots.


Candidates from diverse backgrounds and women appear to be targeted especially harshly, forcing some to spend precious time and resources navigating threats — and in some cases questioning whether political life is worth it at all.

Nili Kaplan-Myrth is a first-time trustee candidate in the Ottawa-Carleton District School Board, but the family doctor had already been in the public eye for her advocacy around COVID-19 safety and vaccinations.

Her campaign was immediately targeted, she said, with stolen lawn signs, violent threats and anti-vaccine and antisemitic messages that attacked her as a Jewish woman and a physician.

“I’ve been bombarded,” she said in a phone interview. “It is such organized hatred.”


In some cases, stickers were put on her signs with QR codes that directed people to anti-vaccine websites. Antisemitic, anti-vaccine pamphlets were dropped off at homes that had signs for her campaign. In one instance, she said a man at a campaign event verbally harassed her about her decision to wear a face mask. She said she reported another online threat to police that came from a username that said “die Jewess.”

Ottawa Police said as of last Friday, they had received 41 complaints related to campaign signs in the city, including one suspected hate crime.

The number of complaints isn’t unusual compared to past elections at every level of government, Acting Supt. Heather Lachine said in an interview. But she said the police service was “more proactive” this time by informing candidates early about the process of reporting hate crimes and mischief.


In Hamilton, Damptey said his team has had to take different approaches to safety than his white counterparts, which sucks time away from policy-related campaigning. His campaign requires that people canvas in pairs due to racism they often face at the doors, although they could cover more ground if they canvassed alone, he said.

Some people make comments like “I don’t like all this woke stuff” upon seeing him, he said, requiring quick thinking around de-escalation, and leaving him with less time to talk about policy.

Despite the harassment they have faced, Damptey and Kaplan-Myrth said they have no regrets about running for office. Damptey said the white supremacist sticker presented an opportunity to discuss anti-Black racism during his campaign and bring the issue into the open.


Still, he said facing bigotry while on the trail takes a toll.

“We really have to pay attention and discuss ways in which we reduce the harm that racialized folks experience when they’re just trying to put their name forward to serve their community,” he said.

Melanee Thomas, a political scientist at the University of Calgary, said she’s concerned by the increasingly intense rhetoric used against politicians and candidates. Harassment targeting women and people from diverse backgrounds is aimed at keeping them out of politics, she said, and it can stem from some people feeling threatened by growing diversity.


Canada needs to assess the role of white supremacy in political institutions in order to make progress on the issue, she said, adding that the problem may “get worse before it gets better.”

University of Alberta political scientist Angelia Wagner researched online harassment in politics between 2015 and 2017. She found that the women she interviewed were aware of the issue, though it had not yet deterred them from seeking office.

“It’s not so far seen as a barrier, but a problem,” Wagner said. “But the potential exists for it to become a barrier. A really sharp, important barrier.”

She said the phenomenon is evolving and complex, and more research is needed on how diverse candidates are targeted and whether online harassment has driven people to leave politics.


Politicians at all levels are subject to aggressive harassment, but municipal candidates often have fewer resources to protect themselves from online harassment, Wagner added, making it more challenging to navigate.

Some politicians say they have been worn down by intense, aggressive messages.

In Peterborough, Mayor Diane Therrien said the volume of hostile messages she received online was “definitely one of the factors” behind her decision not to seek re-election this month.

She’s not ruling out running for office again in the future, but said she’s concerned that other progressive women councillors in the city are bowing out this time around, and that other potential candidates she’s spoken to have expressed wariness about running after seeing the level of vitriol politicians have to contend with.


“It is certainly a reason why people are turned off of the political process,” she said in an interview.

In Waterloo Region, council recently approved a home security allowance for councillors to expense home security systems, in light of concerns about threats being made against elected officials in the city.

Diane Freeman, who is running for re-election as a city councillor in Waterloo, said she was sad that the measure was necessary.

Freeman said she has noticed emails from the public growing increasingly hostile since she was first elected in 2006 as “keyboard warriors” became more confident writing threats and harsh words, particularly aimed at female representatives. Messages took on an angrier tone during the pandemic, Freeman said.

This year, she took a pause before deciding to run again.

“I did take some time to think about this upcoming campaign and whether I really wanted to front the emails again and respond to some of the phone calls,” she said. “It’s just sad. People just seem very angry these days.” 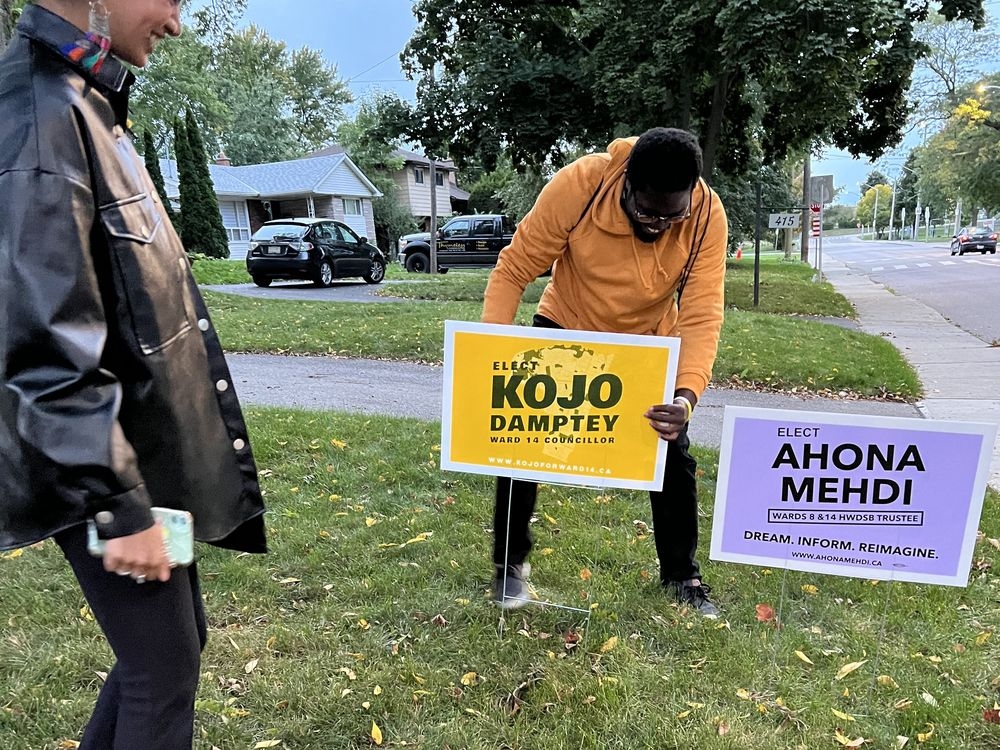