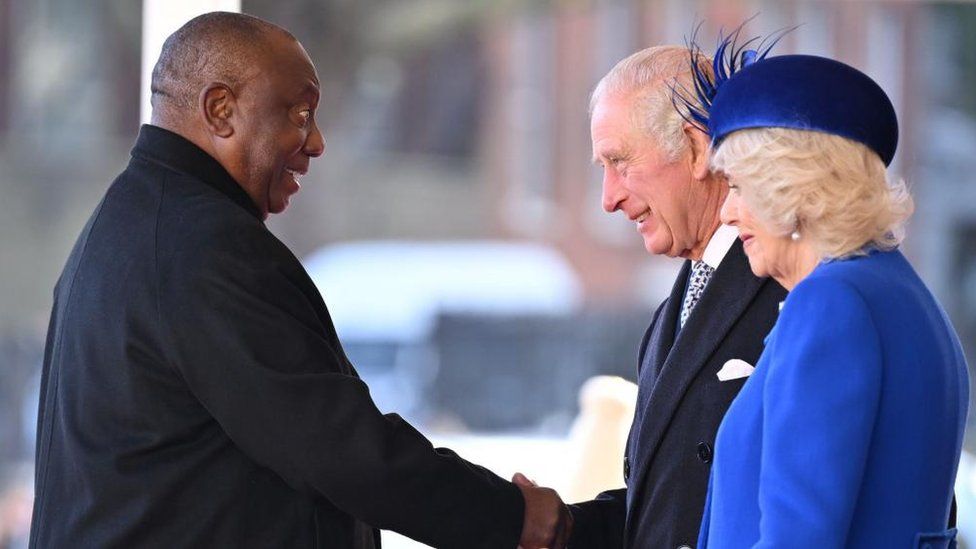 The King has welcomed South Africa's president at the start of the first state visit he is hosting as monarch.

The president will visit Westminster Abbey before attending a banquet hosted by the King at Buckingham Palace later.

It is the first state visit to the UK in more than three years after they were stopped during the Covid pandemic.

The Prince and Princess of Wales met the South African president at his London hotel on Tuesday morning before escorting him to Horse Guards Parade for the ceremonial welcome with the King.

Prime Minister Rishi Sunak, along with Foreign Secretary James Cleverly and Home Secretary Suella Braverman, were also at Horse Guards, where the president and King inspected soldiers from the Coldstream Guards.

More than 1,000 soldiers and 230 horses lined up on the parade ground in central London as part of the traditional opening of a state visit.

His Majesty then rode down the Mall with Mr Ramaphosa in a carriage procession to Buckingham Palace.

The band of the Scots Guards played the South African and British national anthems as the royal party and their guests arrived at the palace where the King, Queen Consort and president are having a private lunch. 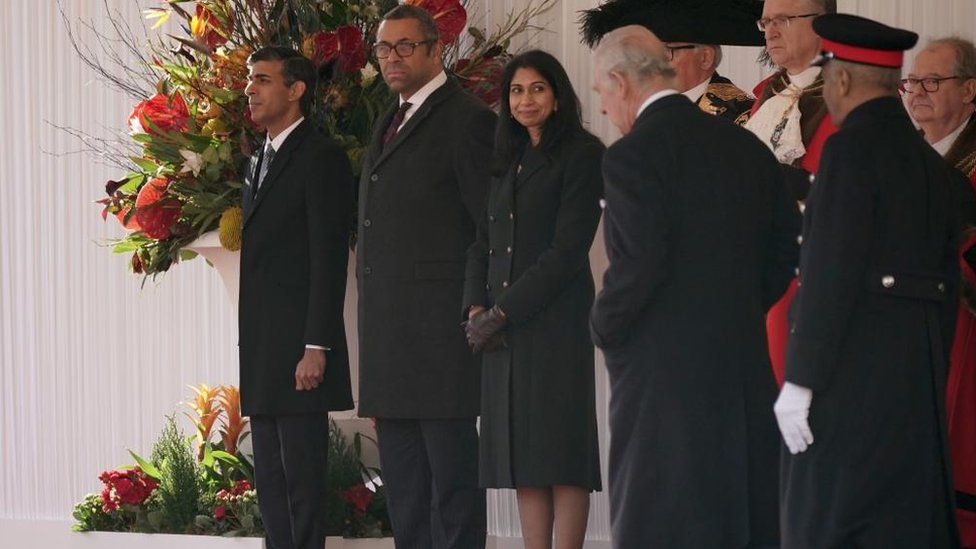 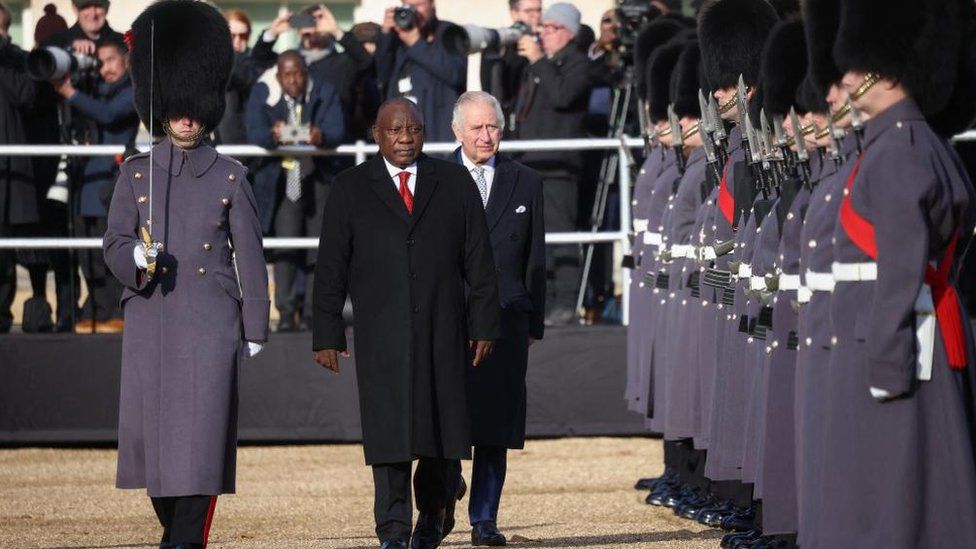 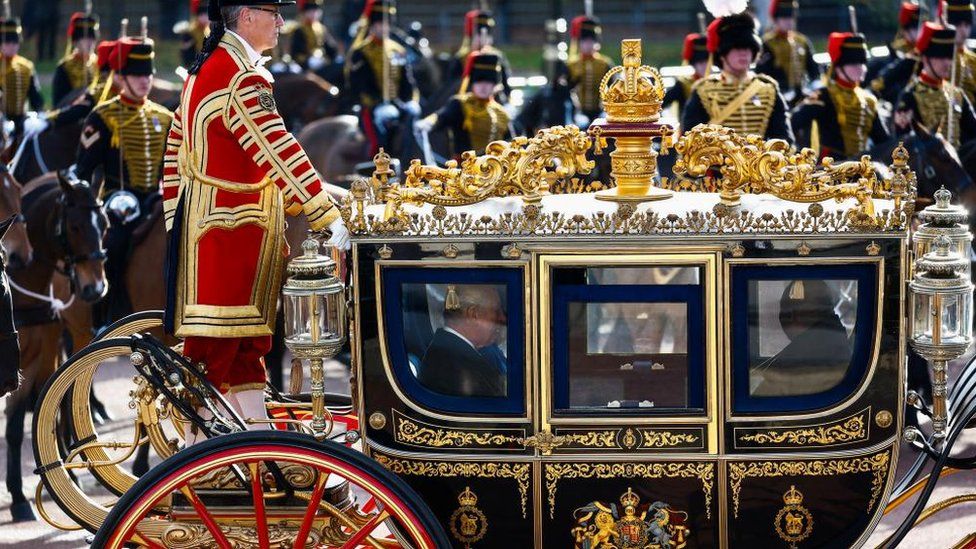 Mr Ramaphosa, who has been head of government in South Africa since 2018, will follow the tradition of laying a wreath at the Tomb of the Unknown Warrior in Westminster Abbey, and then address MPs and peers in the Royal Gallery of the Palace of Westminster.

Later, the King will host a white-tie banquet at Buckingham Palace for Mr Ramaphosa where both men will give speeches.

The visit follows the traditional format put in place during the reign of the late Queen Elizabeth II.

BBC southern Africa correspondent Pumza Fihlani says the president is hoping to use the state visit to drum up support for UK investment in South Africa to bolster the country's economic development and industries.

But his visit comes at a time when Mr Ramaphosa is facing criticism over South African unemployment levels and a return to power outages affecting households, businesses and schools across the country - almost every day for a number of hours at a time.

This month he also said he would "step aside" if charged over an alleged cover-up of a robbery at his private farm, which he denies.

On the day the state visit in London began, Mr Ramaphosa received the backing of a majority of his African National Congress' 4,000 branches nationwide ahead of his party's leadership conference next month.

He will face a challenge for the leadership from former health minister Zweli Mkhize who resigned from the government following corruption allegations at the height of the Covid-19 pandemic.

South Africa's First Lady, Dr Tshepo Motsepe, has not accompanied the president on the trip to London. She is reportedly recovering from eye surgery and was advised not to travel. 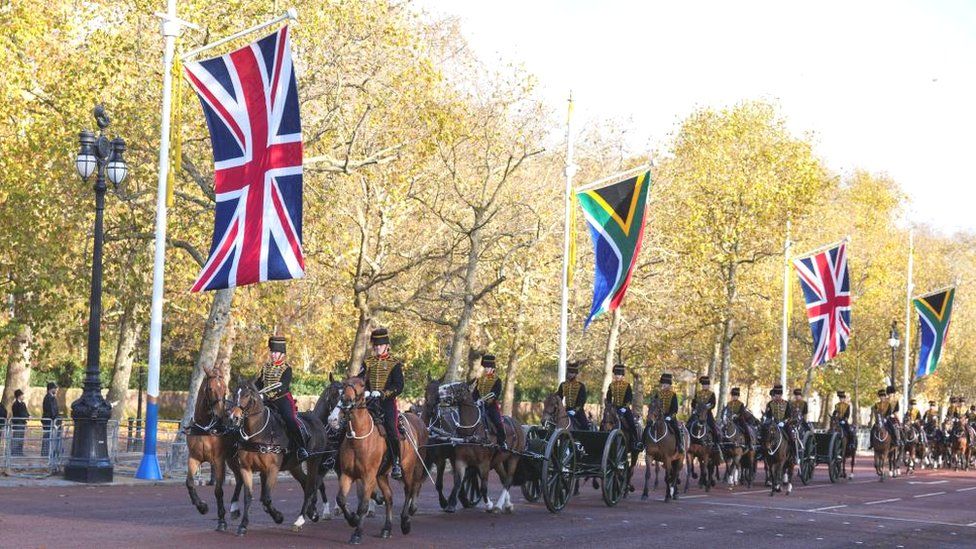 On Wednesday, the Earl of Wessex will escort Mr Ramaphosa to the Royal Botanic Gardens, at Kew in south-west London.

The South African leader will then visit Downing Street to meet Prime Minister Rishi Sunak, before returning to the palace to bid farewell to the King.

Mr Sunak said: "South Africa is already the UK's biggest trading partner on the continent, and we have ambitious plans to turbocharge infrastructure investment and economic growth together.

"I look forward to welcoming President Ramaphosa to London this week to discuss how we can deepen the partnership between our two great nations and capitalise on shared opportunities, from trade and tourism and security and defence."

The president is also set to receive a call from Labour leader Sir Keir Starmer and attend a Guildhall banquet with the Duke and Duchess of Gloucester. 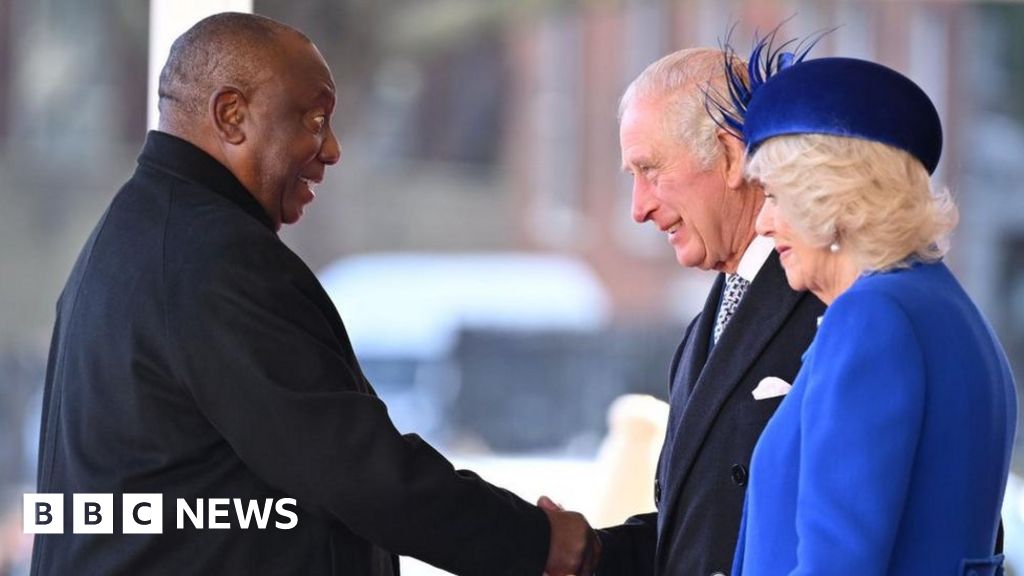 The monarch formally greets South Africa's president ahead of a series of official events in London.
www.bbc.co.uk 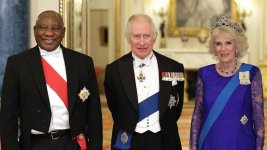 King Charles III meets the South African president on the first State Visit in his reign...

The King gives his speech at the State Banquet in Buckingham Palace tonight...