Kenney government trying to cut the pay of Alberta nurses

Kenney government trying to cut the pay of Alberta nurses​ 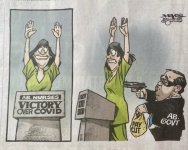 Jason Kenney is the biggest abject failure to Alberta..

He has FAILED Albertans during this pandemic, economically (Jobs and Foreign Investment) and infustructure.

I can't believe this imbecile is trying to shift the blame for Alberta's economic woes to the Nurses who just risked their lives to help with the Covid-19 Pandemic, if anything they should be getting a raise.. Political suicide.

Yet 1.5 Billion Dollars of taxpayer money was shoved into a pipeline that is now dead.

Thank you for reaching out to me. I’m grateful for your support of our efforts to get Alberta’s oil products to tidewater. The start of Alberta pipeline construction for the Trans Mountain expansion project is a positive step forward for economic growth and prosperity across Canada. But this is only the beginning. The true measure of success will be completion of this pipeline.

I appreciate your suggestions for an alternative pipeline route; however, it is important to note that governments do not build pipelines or rail projects, and we are not the deciding body for inter-provincial energy transportation. Whether it is to Hudson Bay, the Great Lakes, Atlantic Canada, the Arctic, or the West Coast, planning and energy transportation infrastructure is the sole purview of private industry. Our government has no ability to mandate where and when such projects are undertaken.

Instead, our government will continue to fight for pipelines, helping us to receive full value for our energy resources. We have been tireless in our advocacy of Trans Mountain and other projects, including Energy East, Eagle Spirit and Enbridge’s Line 3 replacement, of which the Canadian segment is now operational. We also support the concept of a west-east national economic corridor to improve market access for our energy resources. This is an idea backed by many national leaders, and was a topic of discussion at the Council of the Federation 2019 summer meeting in Saskatoon.

For far too long, pipeline projects have been mired in uncertainty. Increasingly, Canada’s resource sector is seen by investors as not worth the risk. Kinder Morgan walked away from Trans Mountain and TransCanada gave up on Energy East, both because of long delays and growing regulatory uncertainty. This has put thousands of good jobs for Albertans and other Canadians in jeopardy.

Meanwhile, Eastern Canada has been importing oil from jurisdictions like Saudi Arabia, Russia and Venezuela, none of which enforces the same environmental protections, human rights standards and labour laws that we are committed to here at home.

And because we don’t have enough pipeline capacity to move Canadian oil from Alberta to our own citizens, we are transporting our product through the country by train, which is less cost effective and far more dangerous than pipelines.

From our first day in office, our government has undertaken important, concrete measures in support of Canadian energy, such as reserving our right to restrict the shipment of oil (Bill 12), challenging the federal carbon tax, and fighting federal bills C-69 (the “no more pipelines bill”) and C-48 (the Alberta tanker ban on the West Coast). We are also investigating the sources behind the anti-oil sands campaign, and we have launched a fight-back strategy that will be coordinated through the Canadian Energy Centre.

The unfair equalization formula must also be amended, and we are seeking the exclusion of non-renewable resources revenues from the calculation, as well as a hard cap on equalization transfers. And we are insisting, as a priority, that the federal government lift the cap on the Fiscal Stabilization Program (retroactively to 2014) that has shortchanged our province in our times of need. This would effectively create a rebate for Alberta’s equalization payments.

In addition to pressing the federal government for these critical changes, I am appointing a Fair Deal Panel to consult with a broad range of Albertans on how best to advance our province’s vital economic interests. The panel, comprising prominent Albertans, will hold public hearings to listen to potential solutions to secure our role in the Canadian federation. Albertans will have the opportunity to provide their input online and through other forms of direct feedback until January 30, 2020. For information on how to get involved, and to sign up for email updates, visit www.fairdeal.ca.

We are hearing from folks like you who want us to succeed and get our energy products to markets, both at home and abroad. I assure you that our government will continue to stand with our partners and fight for the interests of Albertans and of Canadians.

Thank you again for writing, and all the best in 2020.

You know how to amend the unfair equalization shit? Don't do it through motions and shit that never get passed. Use the Quebec gambit. Intentionally keep provincial revenues low (taxes & fees, utilities etc). In fact all the other provinces should do it too. That's all it would take. That is how Quebec forces the ROC to subsidize them at the expense of the ROC.
Reactions: Twin_Moose
You must log in or register to reply here.
Top Bottom