Happy New Year NZDoug.. You guys are the first eh?

I hope everyone on Can Con have a better year in '21 than they had in '20
Reactions: Mowich and B00Mer

No London Eye fireworks tonight as usual. They've stopped it because of you know what. I don't understand why they couldn't still have gone ahead with it but without the crowds. Instead, we're going to be treated to a pre-recorded light show made out of (I think) drones.
Reactions: B00Mer

So when you see London welcoming 2021 in seven hours' time, remember that it's still 2020 in the video.

And so does Sydney (which is shit):

Samoa, Tonga and Kiribati were earlier.

They can't afford fire crackers.
Im nicely hung over this morning, time for refreshing plunge in the sea.
Reactions: B00Mer

Kiribati is an English speaking nation in the middle of the Pacific Ocean a fair distance to the east of Papua New Guinea. It gained its independence from Britain in 1979.

At 313 sq mi and a population of 110,000, it is one of the world's smallest countries (although its islands are scattered over an area the size of India).

Along with Tonga and Samoa, it is the first country to see in each new day and year.

Here is how Kiribati welcomed in 2000:

If you were to lay all the pieces of the Burj Khalifa side by side, they would stretch a quarter of the way around the world. If you were to walk that length without stopping at average walking speed, it'd take you around 87 days. 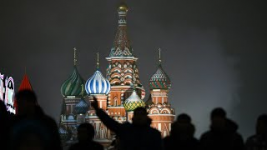 Right, I've put the telly on. It's almost midnight here. Nearly time to watch London's super duper drone show.
You must log in or register to reply here.
Top Bottom