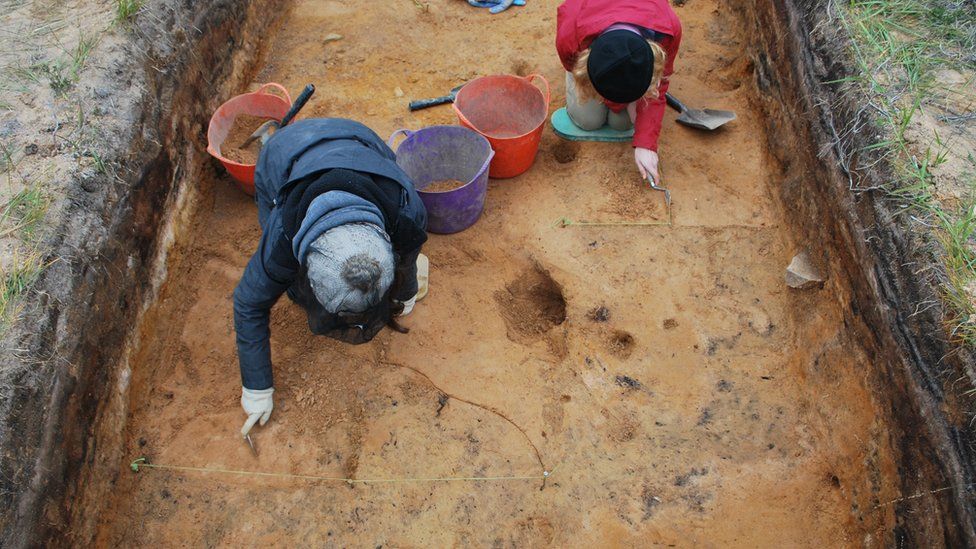 New research has uncovered rare evidence of people living in Scotland's mountains after the end of the last Ice Age.

Archaeologists found stone tools and traces of firepits and possible shelters in Deeside in the Cairngorms.

Finds from the Mesolithic period, also known as the Middle Stone Age, are rare and usually made in lowland areas.

Archaeologists describe the evidence in the Cairngorms as "exciting".

The research, published in the Proceedings of the Prehistoric Society, adds to existing evidence from a handful of other upland sites.

These include on the mountain Ben Lawers in Perthshire and at locations in Lanarkshire and Dumfries. 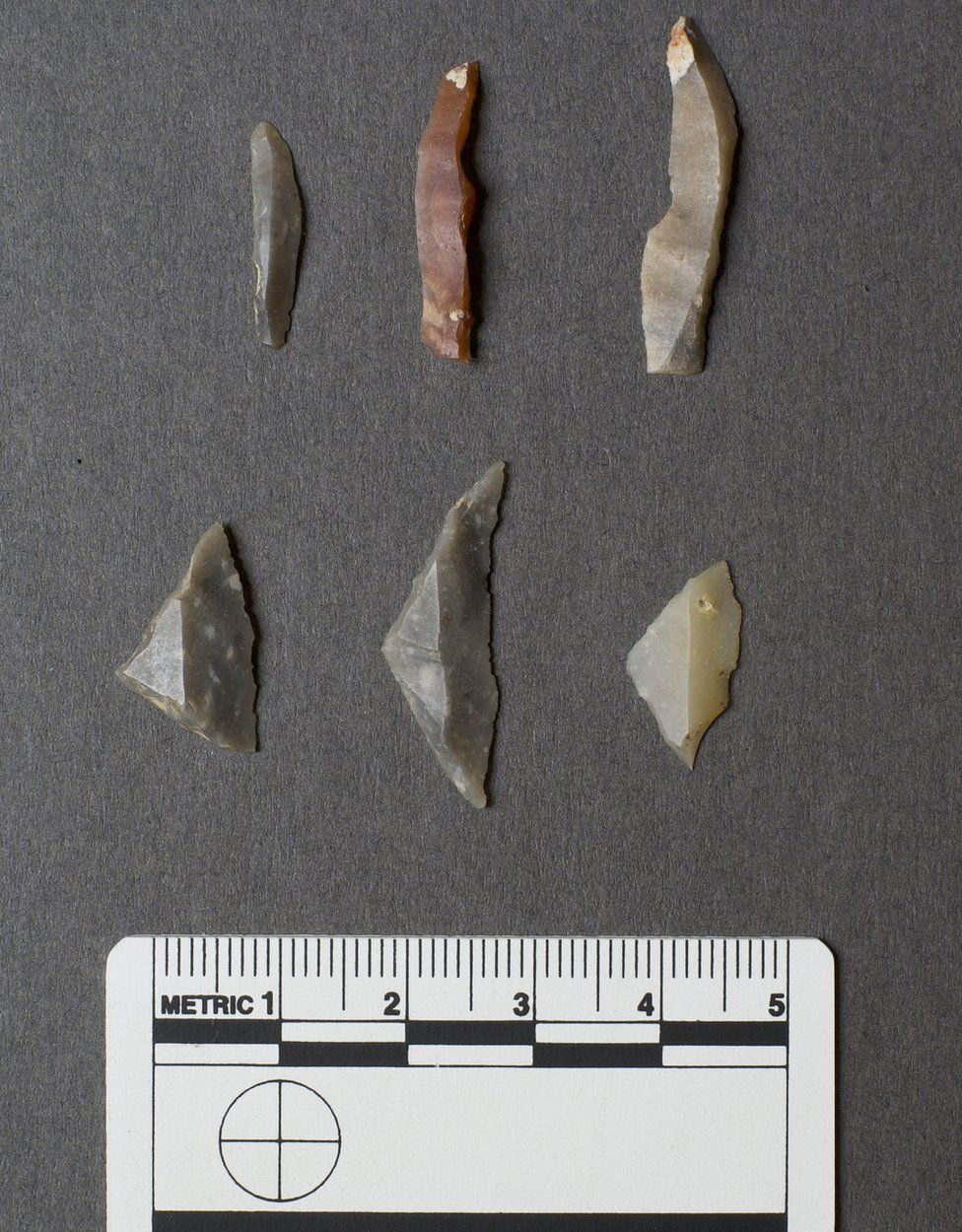 Stone tools were among the finds made by the team

Evidence for those who lived in Scotland after the end of the last Ice Age about 10,000 years ago can be hard to find, say archaeologists.

The population at the time was low and the communities of hunter-gatherers were "mobile, moving around and living off the land".

They did not build permanent monuments and their homes were usually temporary.

What traces of their lives that can be found often amounts to a handful of tiny stone tools, such as flints, and discoloured soil "that hint at an ancient hearth or the stance of a shelter".

Because this evidence has long been buried over time, the "easiest" locations for archaeologists to search are along sea-eroded coastlines or on farmland where farm work can bring buried the evidence closer to the surface. 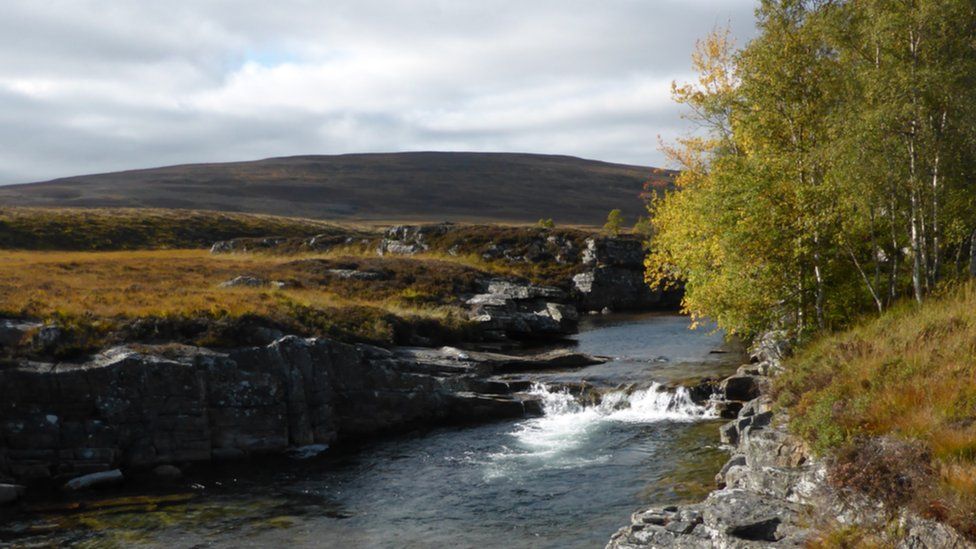 While archaeologists have long suspected Mesolithic communities occupied mountain landscapes, little evidence to support that has been discovered.

Now a team made up of students from the universities of Aberdeen and Dublin has uncovered evidence confirming people were living in the Cairngorms from as early as 7500 BC.

The team's finds at several archaeological sites - including traces of firepits, flints and possible huts - were made on land owned by the National Trust for Scotland (NTS).

Archaeologists believe Mesolithic people headed into the hills carrying their own provisions which they later supplemented by hunting deer, fish and birds and foraging for plants and fungi.

Larger mammals, such as deer, also provided them with skins for use in clothing and shelters, sinews for bindings and antler and bone for use in making tools.

NTS and Aberdeenshire Council were among the organisations that supported the new research.

Further investigations are planned for this summer, if allowed under Scottish government Covid-19 rules. 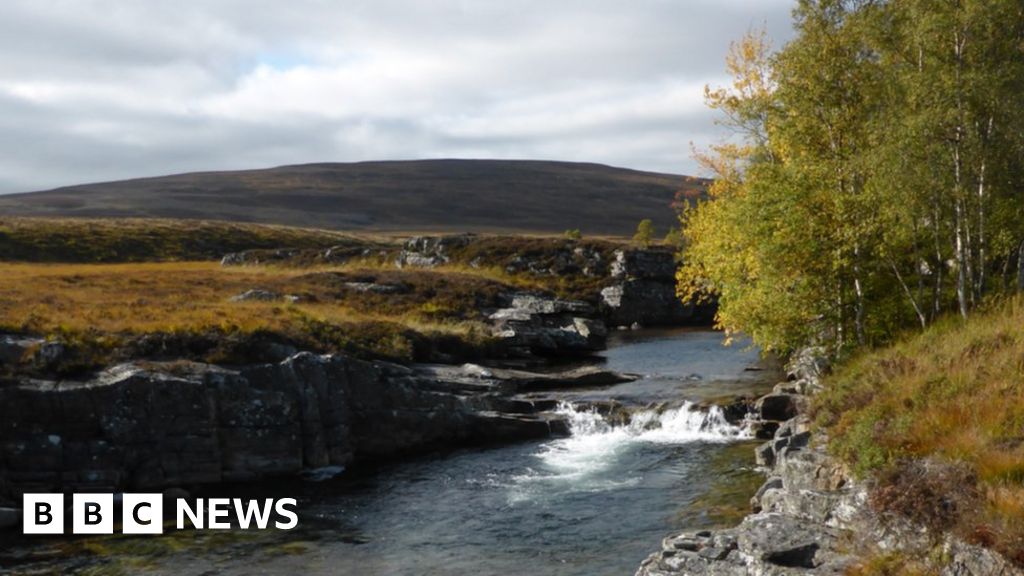