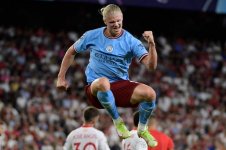 Manchester City's new Norwegian star Erling Haaland scored two tonight as English champions Manchester City thrashed Spain's Sevilla 4-0 in Seville as the world's greatest club football tournament gets underway, although it's a long way to the Final in Istanbul in May.

Manchester City were already one of the strongest teams in the world before they bought Haaland. Now with him up front and scoring for fun they will terrify any opposition.

Croatia's Modric and Belgium's Hazard were on the scoresheet as holders Real Madrid beat Scottish runners-up Celtic 3-0 in Glasgow as they look to win the tournament for a record 15th time....