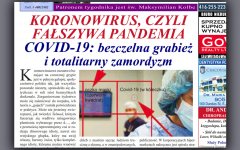 The story suggests 'biological weapons are being worked on in the U.S. and Israel not by just any experts, but (under) the leadership of usually Jewish psychopaths'

A Polish-Canadian newspaper twice published an anti-Semitic tirade recently that suggested COVID-19 is a creation of “organized Jewry,” and that Jews were the cause of all the world’s ills.

B’nai B’rith Canada says it has called on police to investigate the newspaper story as a hate crime, alleging it’s a blatant violation of the law.

“To publish something like this in a Canadian newspaper, whether it’s in English or non-English, is criminal. It’s absolutely criminal to pursue this form of hatred,” said Michael Mostyn, CEO of the human-rights group.

“We feel very strongly that this is a case where charges should be laid … We know that hate speech provisions of the Criminal Code are not often used, but this does cross the threshold.”

The commentary appeared first as the leading front-page article in the March 25 edition of Glos, a weekly newspaper based in Toronto that claims to be read by Poles “around the globe.” It appears to be a renamed version of a former paper called Glos Polski.

Headlined initially “Coronavirus, or fake pandemic,” it ran again in the April 22 edition, both times without a byline.

In discussing the origins of COVID-19, the story suggests that “biological weapons are being worked on in the U.S. and Israel not by just any experts, but (under) the leadership of usually Jewish psychopaths.”

It suggests “organized Jewry” can “laugh their heads off” at the COVID-19 crisis, and that Jewish social media had manipulated the world with “Goebbelsian propaganda.”

In a rambling discourse, it also suggests the radical Islamist group ISIL was a Jewish creation to reduce the population of gentiles, that Israel is “the cause of all the world’s woes,” Jews want to create a Judeo-Polonia state in Poland and that Jews control the world’s stock markets.

The newspaper’s editor, Wieslaw Magiera, could not be reached for comment by deadline.

A promotional page on the polishcanadians.ca website describes Glos Polski as a “paper which searches for the Truth, protects the good name of Poles and reminds us of the Polish culture and history.”

The same page says Glos Polski is “edited by” the Polish National Union of Canada. On its website, the Union itself describes the paper as its “press body” and says the two have been inextricably linked since Glos Polski’s launch in 1951.

However, a lawyer representing the union wrote to the National Post Friday afternoon saying that the organization ended its connection with Glos Polski in 2015.

What’s more, Glos is a separate newspaper and has “nothing to do” with Glos Polski, which is itself no more, said lawyer Marek Malicki.

“The Polish National Union does not subscribe to nor does it condone any articles published in Glos,” said Malicki.

However, the URL, or Internet address, for the newspaper still contained the name Glos Polski late Friday.

And a promotion for Glos Polski that remained online Friday names the editor as Wieslaw Magiera, also listed as editor in the editions of Glos that contain the anti-Jewish article. The promotion also says Glos Polski was “edited by” the Polish National Union of Canada.

The Union says it is one of Canada’s largest Polish organizations, formed in part to counter Communist agitation.

The article seems to be part of an international trend in racism tied to COVID-19.

“The ongoing global pandemic has spurred a fast-spreading epidemic of hate speech and disinformation including conspiracy theories with a clear antisemitic motive,” said the UN agency UNESCO in June, after holding a webinar on the topic. “Data from the World Jewish Congress shows that in the first months of the pandemic, there was a 30 per cent increase in antisemitic content on social media.”

Mostyn said it is one thing for such hatred to be spread through social media, but worse to see it printed repeatedly in a Canadian newspaper.

Careful, it's actually illegal to discuss certain aspects of the Holocaust in Poland, which many interpret as the fact that German death camps were in Poland, but the ban is to avoid discussion of how Polish collaborators were rounding up and killing Jews or giving them to the Germans during the occupation. Actually this was more of a property grab as many saw this as a chance to steal without penalty, but also much of the already racist society was more than content to help with the logistics of the German occupation - https://www.theatlantic.com/international/archive/2018/02/poland-holocaust-death-camps/552455/

And for the record, not ripping on all Polish, the vast majority are decent people who suffered and struggled and are outright stand up people, but the culture itself is unfortunately rather racist and homophobic and that's actually sad.
Reactions: taxslave

There are only about 2500 Jews in China out of about 2.3 billion people.
You must log in or register to reply here.
Top Bottom