Can China Shoot Down Starlink? 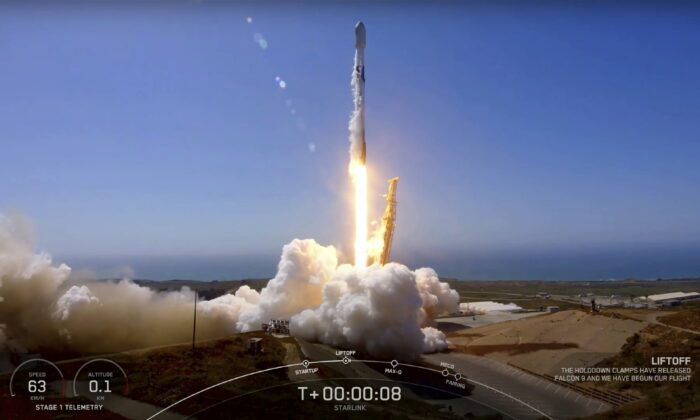 This video image provided by SpaceX, a SpaceX Falcon 9 mission to launch 53 Starlink satellites to low Earth orbit from Space Launch Complex 4 East (SLC-4E), takes off from Vandenberg Space Force Base, Calif., on May 13, 2022. (SpaceX via AP)


Can China Shoot Down Starlink?


Chinese military media is increasingly highlighting the threat to China from Elon Musk’s growing constellation of broadband (Wi-Fi) satellites called Starlink, with one Chinese military journal calling for China to have the capability to shoot them down.

But does China’s People’s Liberation Army (PLA) have that capability?

The short answer is that today, China may not be able to shoot down enough of them, but it has the potential to be able to damage large portions of this growing mega-constellation.

On May 25, South China Morning Post, Hong Kong’s former flagship English language newspaper, revealed that an April article in the Chinese journal Modern Military Technology had concluded that China “needs to be able to disable or destroy SpaceX’s Starlink satellites if they threaten national security.”

This article was worthy of coverage by the Post as one of its main missions is to help generate fear among the democracies of China’s growing military power on Earth and in space.

That same day, a full translation of the journal article was posted on the blog of former U.S. State Department official David Cowhig.

The article noted that lead author Ren Yuanzhen is affiliated with the Beijing Institute of Tracking and Telecommunications. The Post added that this institute is “under the PLA’s Strategic Support Force.”

This is important because the PLA Strategic Support Force is China’s lead military service for combat in outer space. It is also responsible for operating China’s manned and unmanned space programs.

Though it has about 2,400 satellites in low Earth orbit today, Starlink may eventually grow to over 40,000 satellites, expanding broadband internet services from 33 countries to potential global access. 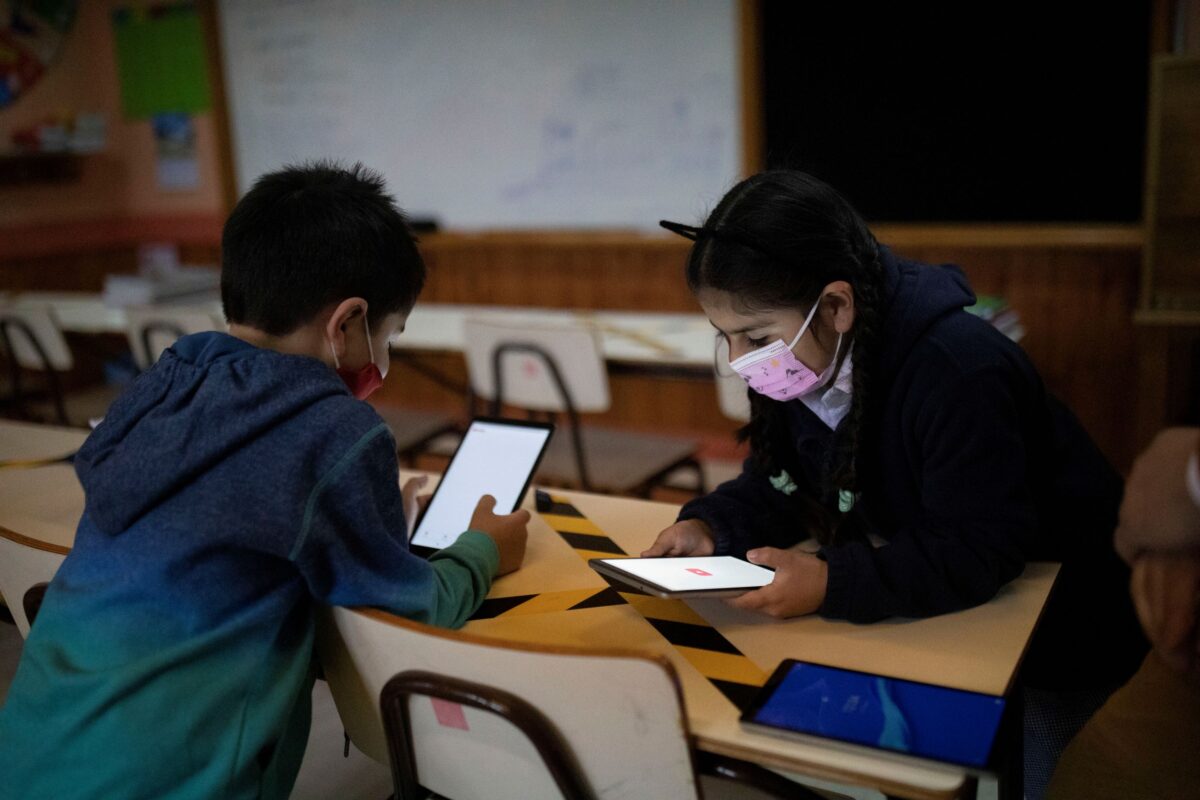 Diego Guerrero, 7, and Sofia Diaz, 7, connect to the internet thanks to Starlink’s satellite antenna at the John F. Kennedy School in the village of Sotomo, outside the town of Cochamo, Los Lagos region, Chile, on Aug. 6, 2021. (Pablo Sanhueza/Reuters)

Starlink is feared by the Chinese Communist Party (CCP) because it offers people around the world a means to avoid Beijing’s decades-long insidious campaign to control national internet systems by dominating their markets in computer server hardware and subsidized 5G communications software/hardware systems.

Not only does Starlink offer services that could overcome the manipulations of Chinese-made internet systems, but it would also allow countries being invaded by the Chinese regime or its main ally Russia to access a communications infrastructure capable of enabling the conduct of military operations—which happens today in Ukraine, perhaps tomorrow in Taiwan.

Even if the Chinese regime were to invade and conquer Taiwan, Starlink could provide a much more secure internet platform to help unite communities of ethnic Taiwanese around the world to sustain a virtual government-in-exile complete with a global network of embassies.

To counter Starlink, Ren wrote, “A combination of soft and hard kill methods should be adopted to make some Starlink satellites lose their functions and destroy the constellation’s operating system.”

Ren apparently noted that China’s ground-based anti-satellite (ASAT) missiles could be used, but they would cause massive debris, and the number of targets would mean the cost of attacking Starlink would be too high.

Instead, according to Ren, the objective of attacking Starlink “requires some low-cost, high-efficiency measures.” The Post noted Ren’s observation that “it would be possible for satellites carrying military payloads to be launched amid a batch of Starlink’s commercial craft.”

China has been rapidly developing laser and microwave weapons, and it is possible that the PLA Strategic Support Force could modify its new Tiangong manned space station or its prominent components, like the 6 tons of cargo carrying the Tianzhou supply ship—two of which are now docked to the Tiangong space station.

Future large modules attached to the Tiangong space station, or the Tianzhou, could carry electrically powered laser or microwave weapons capable of firing an unlimited number of “rounds” at Starlink satellites.

The Tianzhou could also be modified to carry many hundreds to a thousand small “spikes” that could be accurately aimed at passing Starlink satellites.

Today the PLA could launch up to four Tianzhou interceptor satellites on a single liquid-fuel China Aerospace Science and Technology Corporation (CASC) Long March-5 space launch vehicle (SLV). Still, these can only be launched from the Wenchang Satellite Launch Center on China’s Hainan Island. 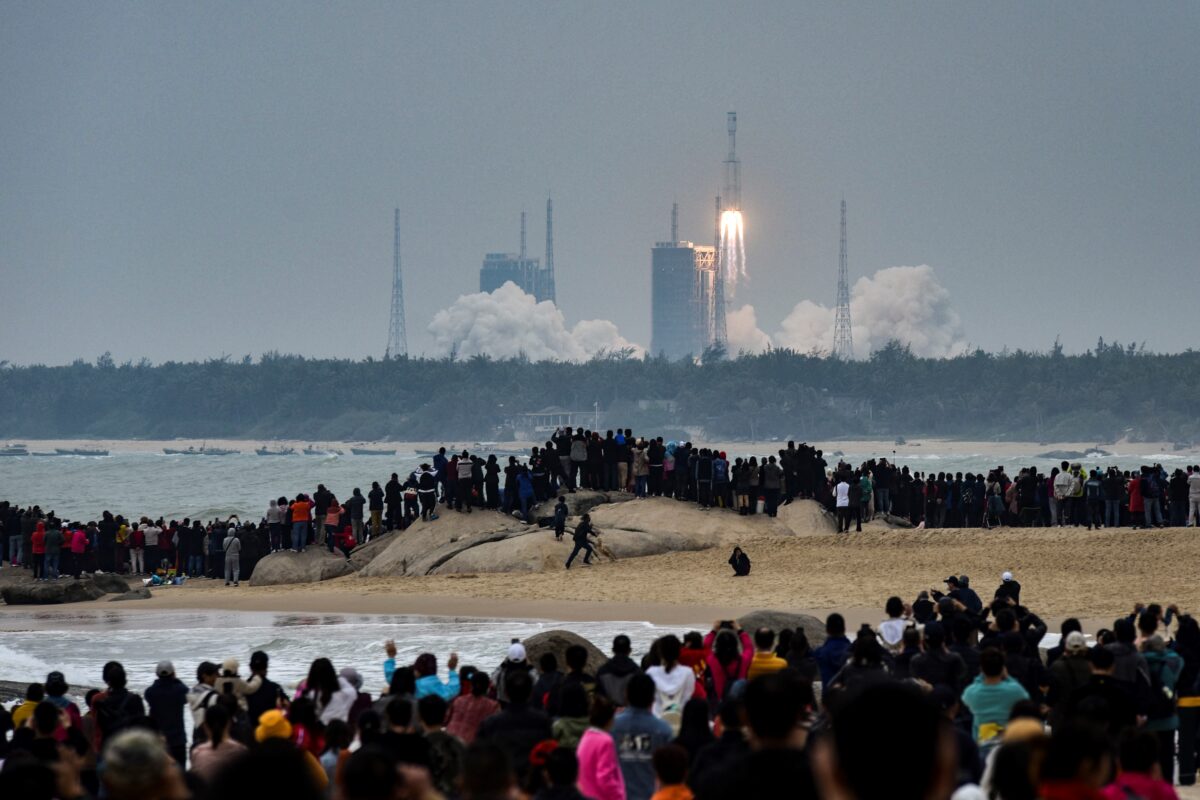 Before the end of this decade, CASC will also launch its Long March-9 moon program SLV, which could also be adopted to launch up to 18 Tianzhou-based satellite interceptors—but these, too, must be launched from Hainan Island.

In the near term, however, the CASC solid-fuel Kuaizhou-21 could launch three Tianzhou-based interceptors from any location in China.

So it is possible to consider that late in this decade, the PLA Strategic Support Force could launch waves of 20 to 40 satellite interceptors based on the Tianzhou platform, or perhaps a new, slightly larger but more capable unmanned interceptor platform.

This potential capability would be in addition to more powerful and even mobile high-power laser systems deployed around China, or in a global network, perhaps smuggled into PLA-controlled satellite tracking bases such as in Argentina’s Neuquen Province or China’s many globally-deployed ships.

But even with such a potential PLA space combat threat directed at Starlink, Musk’s SpaceX corporation alone has the means to make the PLA’s task very difficult.

If it comes to an SLV race with China, Musk may be prepared to go the distance. In a June 5 discussion on Twitter, Musk proposed to “Build 1000+ Starships to transport life to Mars,” which, if realized, would allow more than enough to reconstitute Starlink or its successor.

Starship also allows Musk to launch large numbers of Starlink satellites into higher orbits that are more difficult and expensive for the PLA to attack.

In addition, relatively inexpensive modifications to Starlink satellites, such as adding very lightweight, highly-reflective “umbrellas” to reflect laser attacks or slight increases in the power of their electric-powered thrusters, could enable improved emergency maneuvering to avoid PLA attacks.

The fact that a researcher under the PLA’s Strategic Support Force is even writing about the enormous task of attacking Starlink-size satellite mega-constellations means that the U.S. Space Force requires the resources now to develop the sensors to track, and the weapons to counter, potential PLA ground and space-based ASAT weapons directed at all U.S. satellites.

Rick Fisher is a senior fellow at the International Assessment and Strategy Center.