Scientists on Thursday announced the discovery of a nearly complete fossil of the shark, called Aquilolamna milarcae, that lived during the Cretaceous Period at a time when dinosaurs ruled the land.

Aquilolamna’s name means “eagle shark,” a nod to its slender pectoral fins, which “mainly acted as an effective stabilizer,” according to vertebrate paleontologist Romain Vullo, lead author of the study published in the journal Science.

“Many adjectives can be used to describe this shark: unusual, unique, extraordinary, bizarre, weird. Yes, it is the only shark that is wider than long,” said Vullo, affiliated with Geosciences Rennes, a research unit involving the University of Rennes and France’s National Center for Scientific Research (CNRS).

This advertisement has not loaded yet, but your article continues below.
Article content
“Aquilolamna is indeed a perfect example of an extinct creature revealing an unexpected new morphology. This strongly suggests that other outstanding body shapes and morphological adaptations may have existed through the evolutionary history of sharks,” Vullo said.

Like all sharks and the related skates and rays, Aquilolamna had a cartilaginous skeleton. It had the familiar torpedo-shaped body and tail of a shark but its pectoral fins were utterly unique. The researchers said Aquilolamna appears to have been a slow-swimming shark that fed on plankton through filter-feeding, as plankton-eating whale sharks and basking sharks do today.

The fossil, unearthed in Mexico’s state of Nuevo Leon, did not reveal Aquilolamna’s filter mechanism for eating.


Rays such as the manta ray, with their flattened bodies and large pectoral fins fused all the way to the head, swim through the water as if they are flying through the air. Aquilolamna appears to have done something similar.

“Whereas the locomotion of manta rays is like underwater flight, with flapping movements of their powerful pectoral fins, the long slender pectoral fins of Aquilolamna rather acted as the wings of a glider, or sailplane,” Vullo said.

Aquilolamna lived in the open ocean at a time when the seas were populated with marine reptiles, squid relatives with large shells called ammonites, various bony fishes, and large sharks. The largest predator in its ecosystem was a shark called Cretoxyrhina, measuring 20 feet long (6 meters).

The fish group that includes sharks appeared roughly 380 million years ago, long before the dinosaurs.

Aquilolamna is not the only unusual shark that has swum Earth’s oceans. Sharks and their close relatives have taken on many shapes and sizes – including a prehistoric one called Helicoprion that had a mouth like a spiral saw, another prehistoric one called Stethacanthus that had a dorsal fin shaped like an ironing board, and today’s strange goblin and sawfish sharks. 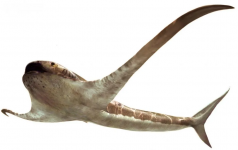 WASHINGTON — About 93 million years ago, a bizarre plankton-eating shark shaped unlike any other known marine creature glided through the sea in what is now…

Cool.
You must log in or register to reply here.
Top Bottom