Why Putin Chose to Invade Ukraine Now? Was NATO Expansion to Blame? A Chat with William Wohlforth

Why Putin Chose to Invade Ukraine Now? Was NATO Expansion to Blame? A Chat with William Wohlforth​

Russia has met unexpected stiff resistance from the Ukrainian army since day one of their invasion. But can the Ukrainian army really drive out the Russians without NATO imposing a no-fly zone and sending ground troops? How well will sanctions work? And is Putin adjusting his goals in Ukraine already? And who really bears the responsibility of starting this war? I had these discussions with William Wohlforth, Professor of Government at Dartmouth University. -

Putin invaded Ukraine because he is crazy, he thinks he can rebuild the Russian empire, what an idiot!!
It’s pretty obvious that he has a mental problem.
Reactions: taxslave


BTW he’s back on Spotify

Durry said:
Putin invaded Ukraine because he is crazy, he thinks he can rebuild the Russian empire, what an idiot!!
It’s pretty obvious that he has a mental problem.
Click to expand...

He always wanted the control of Ukraine for their resources and ingenuity and got butt hurt when the Ukrainians outed his puppet in 2013. He seen his best chance to bring Ukraine back into his grasp with a weak administration and especially after Biden said they would tolerate a small incursion into Ukraine.

If Ukraine would have signed the impending European membership Putin would have lost his chance forever after he seen his chosen Presidential candidate only get around 5% of the vote in the last election.

Putin had bad intelligence on the European and NATO option from the EU, Europe was going to drag their feet forever same as NATO to keep Ukraine out only the old Warsaw pact nations were seriously recommending for Ukraine to join until now. They need Ukraine between them and Russia.
Reactions: Durry
E

Live Q&A Webinar: What Is China’s End Game for the Russia–Ukraine War?

As Russia carries out its invasion of Ukraine, the international interests of the Chinese Communist Party (CCP) are also coming into focus. Prior to the invasion, the CCP and Russia signed a “no limits” strategic agreement, and the CCP made public its intentions to take Taiwan. Sanctions are now driving Russian businesses to the Chinese banking system, and questions are growing on how closely the Chinese regime will support Russia amid the growing conflict.
What is the real goal of the Chinese Communist Party? Will it take the Russian invasion of Ukraine as a strategic opportunity to similarly attack Taiwan? And what does it mean for the United States if the Chinese banking system gains the ability to compete with the U.S. financial system globally? Join host Joshua Philipp and distinguished guest speakers Stu Cvrk, Guermantes Lailari, and Alex Newman as we explore these topics in this special online event.
E

The United States and China may be stepping into their first proxy war. The United States says Russia asked China for military support. Will China help? If so, is the United States ready to declare Beijing the enemy?
China and Russia are using U.S.-funded Ukrainian labs to fight information war. The Chinese regime is amplifying unverified Russian claims, twisting the definition of biological research and biochemical weapons. We break down the details behind this.
I spoke to Michigan state Sen. Jim Runestad on his experience with scared constituents who say they are being watched and controlled by Chinese agents.
https://communismexposed.mp3mp4pdf.net/#digg
E

Are there bioweapon labs in Ukraine, or not? Amid rumors from Russia, how are the United States and Ukraine responding to the claims?
Tens of millions are stranded at home in China. A pandemic outbreak there is causing a snag for global Apple iPhone buyers.
In Shanghai, healthy people, including children and pregnant women, are being held in quarantine alongside confirmed virus patients. That’s as 50,000 people live through a nightmare at a beauty expo.
In the Indo-Pacific region, a U.S. ally says it’s willing to open military bases to American troops, at any time if necessary.
Also in the region, Australia embraces a new method to counter Beijing’s expansion, while Europe is scrambling to reduce its dependence on other countries, including China.
The West is facing one of its biggest dependency problems head-on: how batteries for electric cars are mostly built in China.
Plummeting stock prices and massive layoffs are occurring all after a potentially record fine hits China’s biggest social media firm, amid Beijing’s latest clampdown.
E

Behind Russia-Ukraine, a ‘Total War’ Is Being Waged Against the US and Allies​

A “snake in the grass” is a deadly encroaching danger that can’t always be seen. Recently, President Joe Biden visited Belgium and Poland to signal support to NATO members on Ukraine’s doorstep. In speaking to U.S. troops in Poland, Biden seemed to “let slip” the expectation that U.S. forces will, at some point, be fighting against Russia in Ukraine. However, amid these developments and sanctions led by the United States that are slamming Russia’s economy, the United States has been rolling back efforts, like the China Initiative, aimed at keeping the Chinese Communist Party’s (CCP) “unrestricted warfare” against the United States in check. As an aside, the CCP is heavily suspected of preparing to give, if not already providing, military support to Russia in Ukraine.
What do the United States and its Western allies need to understand about the CCP in order to not be totally overwhelmed by it as it seemingly expands its global power?
What can the nation that lies nearest the “jaws of the beast” and has survived its hybrid warfare assaults for generations teach us about countering this danger? 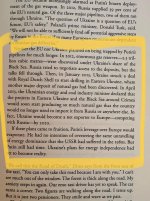 Well that explains a lot.
Reactions: Dixie Cup and petros

taxslave said:
Well that explains a lot.
Click to expand...

It does. I've known this for 7-8 years now.
Reactions: Dixie Cup
E

Zooming In with Simone Gao

Now that the war has started, what is the real good and right thing to do? Is it condemning #Putin , doubling down on sanctions, providing weapons to #Ukraine , championing Ukrainian people’s bravery and patriotism and then returning to the Cold War pattern against Russia? I agree that some of these things are what we have to do now. But we should not limit our thinking and actions to these aspects because if we do, the same tragedy might happen again in the near future since the underlying cause of this war has not been addressed, let alone eliminated. What are the underlying causes of this war? I would like to raise a question: Could the precursor of this war be a series of long term US foreign policy fallacies? For instance, the misconception that the balance of power policy is no longer in play which led to the continuous NATO expansion, this is the theory of realist #JohnMearsheimer ; then lack of prudence, resolve and consistency in responding to the Russian aggression against other eastern European countries; and, finally, clumsiness in differentiating potential allies from foes. In other words, did we pick the wrong enemy? In the next few episodes of our in-depth report, we will focus on one topic at a time. In the first episode, we will explore how a potential friend turned into a mortal enemy and whether the balance of power politics is still relevant today.
E

China and Russia’s romance continues—at least, that’s what China says. We explore what China’s aggressive tones, like breaking international order or criticizing the United States, have done to our perception of the communist regime. President Joe Biden’s new defense budget proposal is facing the heat. At the same time, the Pentagon released its 2022 defense plan, calling China the pacing threat. What does that mean? And can a 4 percent increase in defense help to deter China’s aggression? Bryan Clark, a security expert, weighs in.
E

Five weeks into the #Ukraine war, reigning in Russia using sanctions still proved difficult for the European member countries who were deeply entangled with #Putin due to their reliance on Russian gas and oil. How did that reliance come about and is there any chance for them to break free from the need for Russia's energy? In this short report of Zooming In, we will explore how a CIA warned, Reagan opposed, #Zelensky protested project went ahead.
E

Captain James Fanell, former Director of Intelligence and Information Operations for the US Pacific Fleet US Navy, believes that China and Russia are in an alliance when it comes to the Russia Ukraine war. Therefore, any attempt by the west to ask China to act as mediator to resolve the Russia-Ukraine conflict or bring about regional peace in general is a fool’s errand. Captain Fanell warns that the west’s elites and defense community must change the mindset that trade deals or economic ties can turn adversaries into allies. He states that there are nations that hate the way we think and operate and will do whatever it takes to get what they want.
You must log in or register to reply here.
Top Bottom