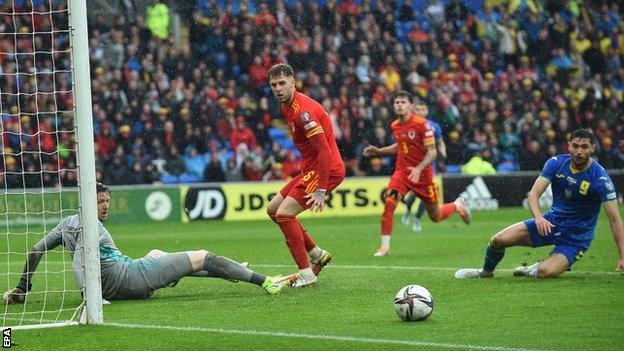 Wales will play England, USA and Iran in only their second World Cup

Wales overcame another monumental effort from Ukraine to qualify for their first World Cup since 1958 on a night of high emotion and drama in Cardiff.

Having beaten Scotland in an emotionally draining semi-final four days earlier, the war-torn Ukrainians were deeply impressive once again but fell just short in their attempt to reach only a second World Cup in their history.

Instead, it was Wales who achieved that feat at a delirious Cardiff City Stadium.

Their winning goal came against the run of play as Gareth Bale's first-half free-kick was inadvertently headed in by Ukraine captain Andriy Yarmolenko, a particularly cruel way for the visitors to concede having dominated before then.

Both teams tired but threw players forward in a chaotic second half, with Bale wasting a golden opportunity and substitute Brennan Johnson hitting the post for Wales.

Ukraine also had several chances to equalise but were repelled by the phenomenal goalkeeping of Wayne Hennessey and defending of Ben Davies.

This was not a vintage Welsh performance but they played with great resolve, and the scenes of celebration inside a deafening Cardiff City Stadium spoke of how cathartic it is for this footballing nation to have rid itself of its 64-year World Cup drought.

Now Wales can finally look forward to being a part of football's greatest competition in November, where England, the United States and Iran await in their group in Qatar.

As for this Ukrainian team, playing to the backdrop of Russia's invasion of their homeland, they have been an inspiration.

They were cheered on in Cardiff by their passionate supporters, including 100 refugees who were given the tickets for free by the Football Association of Wales, while home fans showed their appreciation for the away side with warm applause before kick-off.

However, Wales' mantra in the build-up to this game - as cold as it may have sounded - was that they had to take the emotion out of this game and temporarily put their compassion to one side.

And they did it to realise their own, long-held dream.

Better'n the Russians are doing. . .

I can do this all day. Blame Jimmy Carr videos.

I can do this all day. Blame Jimmy Carr videos.
Click to expand...

Russia may have qualified for the Qatar World Cup had FIFA not kicked them out. They were supposed to play Poland in the play-offs, who instead qualified. 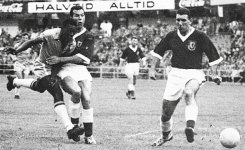 The last World Cup finals match that Wales played was in the 1958 Quarter Final against Brazil in Gothenburg. Brazil won 1-0 thanks to a 66th minute goal by a young player playing in his first major tournament - mighty Pele. Brazil went on to beat hosts Sweden in the Final.

Since 1958 Brazil went on to win another four World Cups and they have won the tournament a record 5 times. The Brazil team which won the 1970 World Cup, beating holders England 1-0 in the Group Stage, is often considered the greatest football team in history.
Last edited: Jun 5, 2022

They would get their independence if they didn't keep voting against it in every General Election. The Welsh must want to stay part of the most successful political union in history.

England also isn't independent, don't forget. There are four parts that make up the United Kingdom and not one of them rules another, just as no US state rules another. In fact, Wales has more autonomy than England does. England doesn't even have its own parliament, unlike Wales. If anyone should be shouting out to get more independence from Britain, it's the English.

Also, there are many foreign football fans who bemoan the fact that the UK has four "national" football teams and think there should be a UK team. But it all harks back to when the UK invented football in the 1860s and the FA was founded. It wasn't clear what remit the FA had: was it just England, the whole of Great Britain and Ireland or the whole Empire? Then suddenly Scotland decided to create its own football association, so the FA came to represent just England. Hence why the UK has four "national" football teams. Considering the UK invented the sport and its four football associations predate FIFA, FIFA wouldn't dare tell us to have one team like everyone else.
Last edited: Jun 5, 2022

Blackleaf said:
They would get their independence if they didn't keep voting against it in every General Election. The Welsh must want to stay part of the most successful political union in history.
Click to expand...

When did Wales join the Mohawk Confederacy?

petros said:
When did Wales join the Mohawk Confederacy?
Click to expand...

Since when is the "Mohawk Confederacy" a sovereign state? And what's it achieved? Has it ever had a global empire?

Great Britain is the most successful civilisation in history. If it were a national football team it would be Brazil.

A long long time ago before there was a UK. And yes.
Last edited: Jun 5, 2022
You must log in or register to reply here.
Top Bottom