What he said doesn't strike me as being particularly odious or offensive (and I watched the videos at the time) but it seems NI politicians are a thin skinned lot. 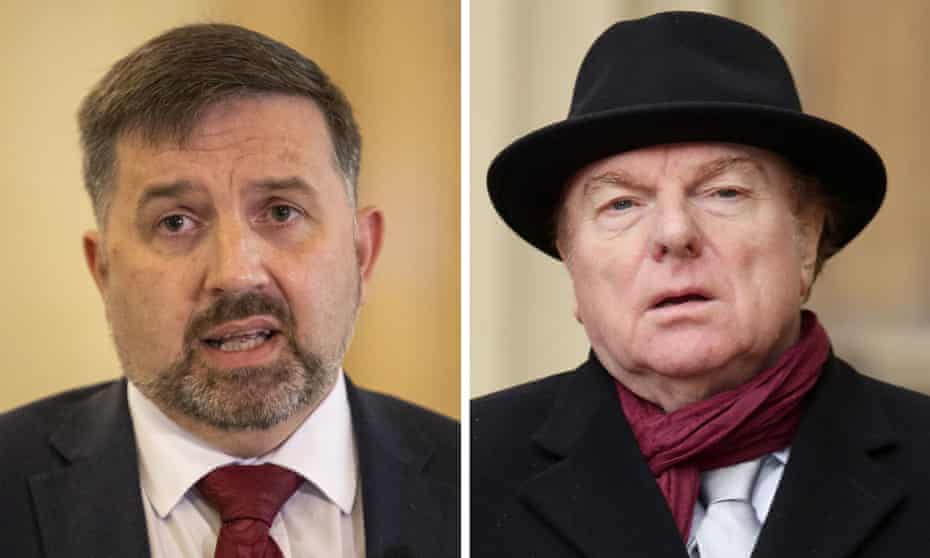 Northern Ireland’s health minister is suing Van Morrison after the singer accused him of being “very dangerous” over his handling of Covid restrictions.

Robin Swann’s legal action relates to a well-publicised appearance by the musician at the Europa hotel in Belfast in June. Morrison criticised the Ulster Unionist party minister after the last-minute cancellation of his show.

Video of the incident went viral after Morrison called the Democratic Unionist MP Ian Paisley on to the stage to join him in chants. Paisley has since described it as “parody” and said he did not believe Swann was dangerous.

Four gigs scheduled by Morrison, including one at the Europa hotel, were cancelled at the 11th hour as live music was still not permitted under Covid restrictions. The management of the hotel blamed confusion by Stormont ministers for the late notice, believing they had been given the green light to proceed.

A few weeks later, Morrison said he would challenge the Northern Irish government in court over its “blanket ban” on live music in licensed venues.

According to reports, Swann began defamation proceedings earlier this year that also cite two subsequent incidents when the singer elaborated on his views on Swann.

In the first, he was asked by a Sunday Life newspaper reporter about his initial comments on Swann. Morrison was reported to have described the minister as a “fraud”. The second relates to content Morrison uploaded to YouTube in which he addressed the Europa hotel controversy. In that video, he again criticises the minister and calls him “dangerous”, albeit referring to him incorrectly as “Robert Swann”.

Swann has hired the libel lawyer Paul Tweed, who has represented well-known figures including Harrison Ford, Justin Timberlake, Jennifer Lopez and Arlene Foster. He recently won a settlement for the former Sinn Féin president Gerry Adams over a libel action against the Sunday World newspaper in Ireland.

Proceedings were “at an advanced stage with a hearing expected to be listed in early 2022”, Tweed said.

Swann’s action emerged after it was disclosed in the Sunday Life on Sunday. It is understood Swann’s legal team sent a writ to the singer in June and followed that up with a detailed statement of claim in September. Morrison’s lawyers are understood to have responded to the claim last month.

The Europa hotel incident unfolded when Morrison complained Swann had “all the power” over the entertainer’s ability to perform gigs. He pulled up Paisley to join him in chants about the health minister.

Swann said Paisley subsequently apologised for the incident and it is understood the minister is not taking legal action against the North Antrim MP.

The Belfast-born singer has been an ardent critic of coronavirus restrictions, particularly those that prevented live music performances. He recorded a number of anti-lockdown songs last year that he said were aimed at the UK government. The lyrics included claims that scientists were “making up crooked facts” to justify restrictions that “enslave” the population.

Swann subsequently responded to those songs in a piece written for Rolling Stone magazine. In that op-ed, the health minister described the singer’s claims as “bizarre and irresponsible”. He said some of what he was claiming was “actually dangerous” and would provide “great comfort to the conspiracy theorists”.

In that op-ed, the health minister described the singer’s claims as “bizarre and irresponsible”. He said some of what he was claiming was “actually dangerous” and would provide “great comfort to the conspiracy theorists”.

Whatever happened to freedom of speech?

Swann is the so-called 'dangerous' one in all of this...trying to curtail freedom of speech and expression. The big pussy can't handle an opinion at variance with his own.

Throw this frivolous case out and award Van Morrison court costs. This reverse-bullying has to stop. And I don't even agree with the singer's sentiments, but I do believe in his right to say it.
Reactions: taxslave