It's for fun not because vaccines aren't working?
Reactions: taxslave

China's latest wave of Covid restrictions has forced millions of people — roughly three times as many as live in New York City — to stay home and undergo mass virus testing in the metropolis of Shanghai.

As Covid cases began to spike in late February, Shanghai tried to control the outbreak with targeted, neighborhood lockdowns. But the city, a center for global transport, manufacturing, finance and trade, decided in late March to implement a two-stage lockdown that soon applied to all districts, generally forcing people not to leave their apartments.
Reactions: taxslave

To a bunch of Karens
Reactions: taxslave

Shanghai’s residents in lockdown have resorted to bartering for food—exchanging Diet Cokes for garlic, a bottle of soy sauce for eggs. We explore how the city’s lockdown has impacted the livelihood of the people. Australia is getting more help with AUKUS. The security pact between the United States, the UK, and Australia will help to boost hypersonic missile development to race against China’s hypersonic threat. I have Rick Fisher break down the new details.

Good thing they all have their vaccines or it could be worse.


Sounds like a rickshaw convoy to Beijing is desperately needed in China.
Reactions: taxslave and Ron in Regina

JLM said:
I think since every major country in the world has bent over backwards to test the effectiveness & safety of the APPROVED vaccines, maybe for the good of the majority they should be compulsory. 3 deaths out of hundreds of millions of jabs should definitely be considered safe. We have to stop listening to these f*****g politicians and start paying attention to what the doctors are telling us.
Click to expand...

There has been no long term testing, unless they kept this disease secret for ten years before telling us we have a pandemic. You missed a few zeros behind the 3. Stop listening to CBC. They lie.
Reactions: petros

JLM said:
For God's sakes use your brain man! Carrying the bug won't necessarily kill you, being infected most definitely CAN!
Click to expand...

Jack, that is two words for the same thing.
Reactions: petros

Bruh, I got me some lasting psychological damage here! I need COMPENSATION!

Sorry, I'm a Conservative, I don't carry "spare change". If you need bus fare, ask the driver nicely, if there is resistance, remind the driver that it's "public transportation, not private".
Reactions: Tecumsehsbones

petros said:
Sorry, I'm a Conservative, I don't carry "spare change". If you need bus fare, ask the driver nicely, if there is resistance, remind the driver that it's "public transportation, not private".
Click to expand...

If I am hungry, I will knock on your door and say to you politely "I'm hungry. Will you please give me some food?" When you do, as I'm sure you will, I'll ask "Is there some work I can do for you for a couple of loonies? Then I'll be on my way." I'm sure if you have any such chores you'd like done, we'll make a deal. If not, you'll send me on my way, maybe with a fiver or a tenner, maybe not, depending on your mood and my politeness.

That is conservatism as it should be, and at its heart, it is. Ask for what you need. Offer service rendered for goods received. Be an adult. Stand on your feet. There's nothing wrong with being poor, or flat broke. The only wrong is not being willing to pitch in for what you get.

Once upon a time, I lived that way for most of a year. Encountered a lot of fine people, vastly outnumbering the a-holes.
Reactions: Ron in Regina and petros

I have someone from down the street who comes by every time it snows. $20 for right down to the concrete. An hour later I'll see him stroll past carrying 12 beer and and bag of McDonalds.

I'd rather be known as "one of the good ones" (whitie I assume) than be know as a dick worthy of having a vehicle vandalized.

Oh, bullshit. Quit trying to deny the fact that you're a good man.

The rumours are just that, rumours.
Reactions: B00Mer

Anywho….Trucker Convoy, etc….Prime Minister Justin Trudeau may think he’s going to dodge accountability for his recent unjustified use of the Emergencies Act…..& he probably will…but not until he & Jagmeet shut down a committee answerable to Parliament & untimely the Canadian People.

The law states that 60 days after the use of the Act has wrapped up, a committee needs to probe its usage and the events leading up to it.

Trudeau and the Liberals made a lot of theatrical claims that vilified the truckers’ freedom convoy. They took troubling images – like the appearance of a Nazi flag on the periphery of the first day of the protest – and made it sound like the flag was constantly flown all over the place for days on end.

Canadians quite rightly denounce things like the waving, however brief, of such a despicable flag. But they should also denounce the Liberals exaggerating and manipulating the presence of the flag for their own cynical reasons.

Not all Canadians agreed with the protesters and their tactics. We spoke out against some of their tactics in this very editorial space.

But we also appreciated that Canadians of diverse backgrounds and all walks of life saw the convoy as a broader symbol for opposition to COVID rules that were past their best before date.

There was simply no need to use the Emergencies Act to quell what transpired during the protests. This has been stated by many legal and law enforcement experts.

Invoking the Act should not be done lightly, yet that’s exactly what the Liberals did. 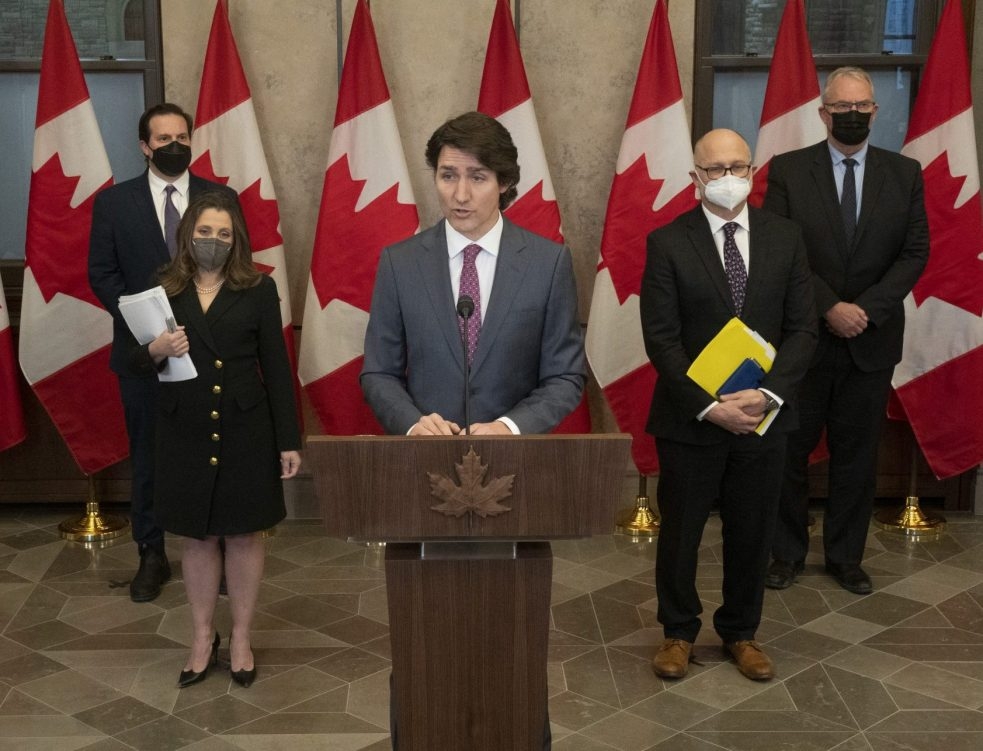 Prime Minister Justin Trudeau may think he’s going to dodge accountability for his recent unjustified use of the Emergencies Act. But he’s not. He still has to…

All opposition MPs ought to be united in investigating why the Liberals did what they did and the claims they made to justify them. We’re looking at you & the rest of the NDP here Jagmeet!!!

A lot of their grandiose claims slipped by in the moment with little scrutiny. Now there is time to get it right.

The freezing of bank accounts without any form of court order was a disturbing action, regardless of the alleged crime or who was targeted.

That is just one reason why we can’t let Trudeau’s unjustified use of the act set a precedent.

Just like Trudeau did during the SNC-Lavalin affair, his hyper-partisan approach to the issue undermined Canadian rule of law.

The inquiry shouldn’t be treated as a minor exercise. It’s an important mechanism for truth and accountability. Still looking at you & the NDP here Jagmeet….

(A number of civil liberties groups are pushing the federal government to allow them to call witnesses and compel sworn testimony during the inquiry into the Trudeau government’s invocation of the Emergencies Act. According to the Canadian Civil Liberties Association, an inquiry that doesn’t involve the major players testifying under oath would be meaningless. Tom Korski has been following the Emergencies Act for Blacklock’s Reporter in Ottawa)
Reactions: petros

The Axis of Weasels isn't going to last. The newcomer voters that floated Trudeau into a minority aren't as stupid he thinks. They'll eventually learn enough English to get the big picture.

Trudeau and his Liberals can read he tea leaves . They knew from the results of the last election that they are toast going forward . Their only hope is to retain enough of a base to throw the Conservative efforts to repair the deficit and debt back in their face . Only by co opting the NDP can they do this .

The cult needs some deprogramming.

Here, this is interesting:

While the Senate was debating the Emergencies Act, the federal government inferred it had special intelligence that the Freedom Convoy was a national security threat but refused to release it to the Senate?

Since that time there have been no charges of violence against the Freedom Convoy protesters. In fact, the exact opposite is true. Lawyer Keith Wilson, in an interview with independent journalist Viva Frei, revealed that at night Antifa was vandalizing the convoy’s trucks, slashing its tires, and cutting its air lines.

All of the 911 calls and arrests made at that time were related to Antifa, but the mainstream media refused to report that.

The centerpiece of the Emergencies Act was the measures taken against the crowdfunding websites and the freezing of Freedom Convoy supporters’ bank accounts based upon the narrative that they were funding illegal activities or were foreign-funded.

During testimony to the House of Commons Public Safety Committee, GoFundMe and GiveSendGo noted they were never contacted by the federal government of Canada. GiveSendGo testified that 60 percent of donors were from Canada and 37 percent from the United States, with the average donation being $100. Its own analysis of donors yielded no terrorists or people of interest.

This was the same for GoFundMe. Global News reported: “Juan Benitez, the president of fundraising website GoFundMe, said his company’s analysis of the more than $10 million donated through the platform found that 88 percent of donations and 86 percent of donors were from Canada.” The largest donation was $30,000, and it was from Canada.

When the Freedom Convoy protesters were in Ottawa, Canadian Prime Minister Justin Trudeau, the cabinet and the mainstream media told Canadians that the protesters were funded by Russians, dark money, Donald Trump supporters and foreigners.

Canadians were told protesters committed violence, rapes, threats of rape, attempted arson and other crimes. The Freedom Convoy was marked as a national security threat and accused of terrorism and insurrection.

All of this has been proved false. All of the supposed evidence to support the invocation of the Emergencies Act and give Trudeau extraordinary wartime powers was a lie.

At no point before February 14 when the Emergencies Act was invoked did a judge declare the protest illegal. The media and federal government labeled the protest an illegal occupation or a siege, but the court order against honking included language that the protest had the legal right to continue to protest.

The Freedom Convoy was declared illegal only by the prime minister after he had the authority to do so because of the Emergencies Act. The emergency statute declares that the measures do not apply to a lawful assembly or dissent. If a judge ruled that the protest was legal, wouldn’t that make the application of the statute to the protesters illegal? 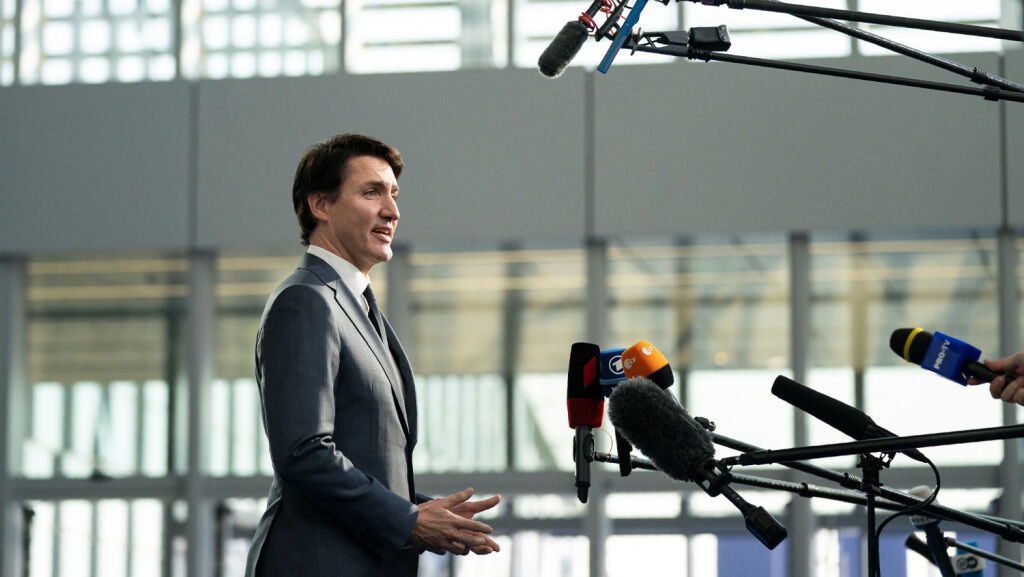 The Biggest Scandal in Canadian History

The radical left in Canada is being exposed, and the mainstream media is ignoring it.
www.thetrumpet.com
Trudeau and the cabinet have been caught in monstrous lies, but the media refuse to report the truth. In fact, the Minister of Heritage Pablo Rodriguez thanked the mainstream media for their coverage of the Freedom Convoy protests and promised more media subsidies. Yet the evidence paints a very condemning picture.

I wonder if there was uptick in covid after the rally with thousands in close contact, maskless and unvaxxed?

If the data were available it would speak volumes. Jan/Feb was the peak of omicron.

petros said:
I wonder if there was uptick in covid after the rally with thousands in close contact, maskless and unvaxxed?

If the data were available it would speak volumes. Jan/Feb was the peak of omicron.
Click to expand...

And the answer is ??…..
You must log in or register to reply here.
Top Bottom