'The worst president we have ever seen. Period'

I honestly thought that Trump and his lawyers had all the proof that they needed to win. But what do I know. Maybe it was all just a lie.
Click to expand...

Courts are still in the process illegalities are being found Michigan and Wisconsin are the latest, Arizona won their case and are to start a full forensic audit for Maricopa
Reactions: Danbones

Never too late to set the record straight
Reactions: Danbones

Twin_Moose said:
Never too late to set the record straight
Click to expand...

Stay away from children.

...like the ones you have in cages down on the border?

they say child trafficking is way up down there since Biden took over.
Reactions: Twin_Moose

A lot of posters on here and the Dems. proclaimed that Trump profited while being POTUS fact check said that's a lie

President Trump Did Not Profit From Market Boom In Which He Created, According To Financial Report​

A new financial report confirmed President Trump’s assertion he not only did not profit off the presidency, but actually grew less wealthy as a result of his service to the American people.

This is according to estimates by Forbes, which were published in their annual Billionaires List on Tuesday. It assessed his net worth at $2.4 billion, which is down from $3.5 billion in 2017 at the onset of the Trump administration.

That means despite four years of accusations from the left that President Trump was enriching himself from the White House, his time in office actually cost him about 32 percent of his total wealth. This confirms the truth behind his numerous statements on the matter.

“I think I will, in a combination of loss and opportunity, probably it’ll cost me anywhere from three to $5 billion to be President,” he previously stated. “And the only thing I care about is this country…couldn’t care less, otherwise.”

Moreover, the analysis performed by Forbes and verified by industry experts also projected that had President Trump sold off all his assets and used the proceeds to invest in the stock market, he would have made himself $1.6 billion richer.

This is due to the thriving stock market overseen by the Trump administration and boosted by a business-friendly overhaul of the U.S. tax code, which was spearheaded by President Trump. According to Forbes, he refused to “cash in on a market boom he helped propel.”

While the Constitution mandates the president receive a salary amount decided by Congress and thus a sitting commander-in-chief cannot legally refuse it outright, President Trump still did not profit. While keeping one of his earliest campaign promises, he donated the totality of his salary, set at $400, 000 a year or $1.6 million over four years, to various government agencies throughout his presidency.

His first quarterly donation was in the amount of $78,333, which Forbes estimated were his post-tax earnings. This was topped off by an “anonymous” donor to a total of $100,000, which was the same amount President Trump donated every other quarter of his presidency. This suggests he was not only not taking in a salary, but dipping into his own private funds to pay taxes on that salary then donating the pre-tax amount back.

Yet, despite all those financial losses, President Trump said on repeated occasions he had no regrets over making that sacrifice for the sake of the American people.
Reactions: taxslave

The split is real, folks. 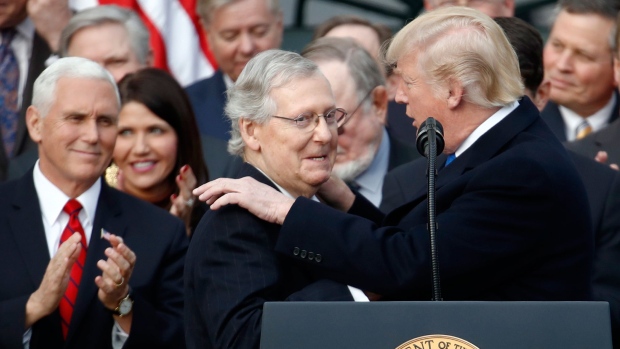 One by one, the Republican leaders of Congress have made the trip to Mar-a-Lago to see Donald Trump, counting on the former president's help to win back control of the House in 2022.
www.ctvnews.ca

One by one, the Republican leaders of Congress have made the trip to Mar-a-Lago to see Donald Trump, counting on the former president's help to win back control of the House in 2022.
www.ctvnews.ca
Click to expand...

Your split from reality?
Reactions: Danbones

Twin_Moose said:
Your split from reality?
Click to expand...

Do you.. Realize you're in a cult?

mentalfloss said:
Do you.. Realize you're in a cult?
Click to expand...

'The worst president we have ever seen. Period'​

Come On Man.. it's only 100 days into his Presidency give the guy a break..

Here are The Lies that Biden Has Already Told... - UnitedPatriotNews.com

Now that Biden has installed himself in the Oval Office, his administration would be subjected to rigorous fact-checks. The Federalist uncovered and published some of the lies Biden has already conveyed. 1. Biden Scrapped the Early China Travel Ban of Trump as Xenophobic But Later Signed His...

Who was doing the actual collusion?