17th Century - the Reformation and the burgeoning new "religion" of science was a spreading influence across the face of Europe. The Church of England knew something had to be done to counter a world that might reach beyond its influence. If not now, perhaps sometime in the future. And what better counter to the world of reason, than the world of the supernatural. And what represented the world of the supernatural on this earthly plain? Well, witches of course (and perhaps the Catholics as well for good measure).

The call against these woman (and men) reached a fiery pitch during this century, perhaps brought originally to fore by James VI-I. His fevered persecutions of those suspected of dabbling in the black arts and their supposed attempts upon his life saw no previous equal in Britain. Indeed, witch trials (and executions) in Scotland alone were second only to those of Germany (with its much larger population).

The trial of the North Berwick Witches is particularly notorious. James accused a group of witches and warlocks of trying to sink his ship as he journeyed with his new queen from Denmark to Scotland by casting spells that brought up terrible storms (that did manage to sink his wedding/treasure ship). The tenor of the prosecution and subsequent trial set the stage for what was to come in the decades ahead.

Pope Innocent VIII issued his notorious Papal bull of 1484: Summis Desiderates. So salacious and shocking was it, that it was used as a preface to the book Malleus Maleficarum (The Hammer of Witches), published by two German Catholic Inquisitors in 1486. In it, it described in detail ritual satanic and sexual aberrations as practiced by witches - women in particular. In fact, pointedly and deliberately so. What else were all these people afraid of? A changing world? Women's place within it? A power structure altering away from the Churches of Europe (the largest landowners on the continent)?

For such a notorious character, surprisingly little is k nown of Matthew Hopkins prior to his moving onto the bloody stage as (self-appointed) Witchfinder General. The English Civil war was still raging across the length and breath of Britain (much activity generated from Scotland, so perhaps it is time that history acknowledged it by changing its name (don't hold you breath).

Even in areas unaffected by direct military activity, the severity of the times and events carried tremendous weight - fear and economic upheaval are deadly, self-promoting friends, and in the countryside of England, sectarian fears (at the least) unleashed deadly men consumed with a dread focus - the rooting out of witches.

There is a notion that Hopkins may have been a lawyer, or at least had some training in the profession, but no one really know. There are rumors and some documentation that he was the son of a minister. What prompted this singularly cruel man? The question begs to be answered, but there are just no good answers. It could have been the lure of money and cheap opportunism; a viscous nature uncluttered by remorse, decency or a bad conscience; perhaps even a misapplied and misinterpreted religious conviction - but that might be giving him far too much the benefit of the doubt. He certainly wasn't alone in his profession - there were others so inclined roving the countryside. We will probably never know.

One of the first documented cases instigated by Hopkins was against a woman named Elizabeth Clarke. She was a one-legged widow, or so the story says (many women who came under suspicion of witchcraft were widows, or women who had no strong men or family to protect them), and the Witchfinder General soon had a confession out of her which stated she was a little too familiar with her "familiars" - generally considered to be demons in the guise of earthly beasts (cats, goats, etc.). The women were often searched for a third teat as proof of satanic connections (woe be it to anyone who had a not terribly uncommon superfluous third nipple) - it was this which "nurtured" the demon.

Other signs and symbols were various marks found upon the body - any of what we now refer to as beauty marks, or even boils, and other slight skin imperfections (including dry skin splotches) made the witch finders highly suspicious - these were viewed upon as signs of unholy alliance and contracts with the Devil. To prove his case, Hopkins would insert a needle into the spot causing immense pain. In England, witches were often kept awake for days on end till they confessed. Sleep deprivation is still a technique used by secret police and military forces, as well as in religious cults, in order to break down a person's will.

Another well known method to discover a witch, was to bind the suspect and lower (or drop) them into water. If they drowned, they were proven to be innocent. If, by some miracle they did not drown, they were considered guilty - and then drowned deliberately. Other forms of actual execution were hanging, burning, and drowning.

In all it is suspected that Hopkins was directly or indirectly associated with perhaps as many of 200 executions - if not by his direct "examinations", then by his murderous, and seemingly omnipotent influence. He even published a pamphlet explaining how one would uncover a witch.

Finally, some influential people and institutions began to tire of Hopkins and his ilk. Parliament itself published their own pamphlet questioning the practices of witch finder's in general. Even some brave clergymen went on record denouncing the rather ridiculous and arbitrary methods used to find these followers of Satan. They even hinted that Hopkins himself might be a witch!

Stories vary as to whether or not Hopkins benefited financially from his evil activities - some say he did, others that he was on a holy quest, and monies obtained were slight.

The End of the Witchfinder General

As might be expected, there are two conflicting stories about the demise of Matthew Hopkins. One states that he returned to his home village, discredited, were he may have did in 1648 of consumption. The other tale - probably apocryphal, but wonderful and fitting if true - is that he himself was accused of witchcraft, tied and "floated" - and of course drowned. I guess that proved he wasn't a witch after all.

In the late 60's an English film about Hopkins was made called Witchfinder General, starring Vincent Price as Hopkins. Though a low budget affair, it is a reasonably sober tale dealing with the events surrounding this evil man. In American it was re-titled The Conqueror Worm after a short poem by Edgar Allan Poe. I guess they figured Americans wouldn't know what a "Witchfinder General" was - but what made them think we would know what on earth a "conqueror worm" was supposed to be? 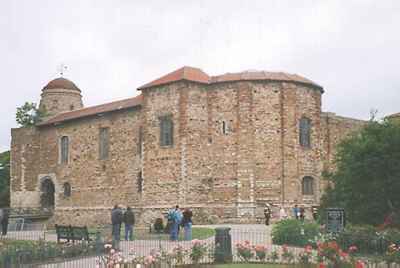 One of the most notorious episodes in the Castle's history was when it was used by Matthew Hopkins, who operated in East Anglia between 1645-1647. There was an increasing fear of witchcraft through the 16th and 17th centuries and , in the disturbed times of the Civil War, Hopkins found many who were wlling to blame their misfortunes on the work of a witch. Hopkin's method of interrogation involved denying the (almost invariably female) victim sleep and pricking them with a needle to try to find their 'witch's mark' where they felt no pain. All the while he would be encouraging them to confess and to implicate others. In 1645, in Colchester Castle he made 15 year old Rebecca West from Lawford turn King's evidence against her mother Anne, who was then hanged for bewitching a man to death.

Matthew Hopkins published a book 'The Discovery of Witches' in 1647.

http://www.sawneybean.com/horrors/matthew.htm
You must log in or register to reply here.
Top Bottom