The Stone Roses are to reform

Manchester band The Stone Roses are set to reform and have a comeback tour in Britain and the US.

The band, part of the "Madchester" scene of the late Eighties and early Nineties which also gave us bands such as Oasis and established Manchester as a great musical centre, are singer Ian Brown, guitarist John Squire, bassist Mani and drummer Reni. Brown once said that Squire is the world's best guitarist, Mani the world's best bassist and Reni the world's best drummer.

They only released two albums. Their first was "Stone Roses", released in March 1989, which included hits I Wanna Be Adored and I Am The Resurrection. It is regularly voted best album ever.

The band released their second and final album, 'Second Coming', in 1994.

In 1996 they split after Ian Brown and John Squire had a row. It is rumoured they have never spoken to each other since.

Now, Mani is the bass player for Primal Scream, who he joined in 1996, and Ian Brown is a solo artist.

The Stone Roses, the cult band that grew out of the 'Madchester' movement, are reportedly re-forming to play a comeback tour.

If the tour goes ahead, it will coincide with the release in June of a 20th anniversary edition of the band's debut album, 'The Stone Roses' Photo: HULTON/GETTY


Reports suggest they will perform both in Britain and the United States, with at least 21 of the concerts being staged on this side of the Atlantic.

The news comes only months after the band's front man, Ian Brown, insisted there could never be a reunion. "No chance," he said. "Not in the next three lifetimes."

If the tour goes ahead, it will coincide with the release in June of a 20th anniversary edition of the band's debut album, 'The Stone Roses'.

It first came out on March 13, 1989 and shot them to fame with hits including I Wanna Be Adored and I Am The Resurrection. It is regularly voted best album ever.

According to the Daily Mirror, Brown changed his mind following overtures from the band's guitarist, John Squire.

Madchester's finest The Stone Roses are re-forming for a summer tour.

A source said: "It's taken a lot of time and effort to get Ian to agree but he's really up for it. He was the sticking point throughout the proceedings, but he's finally relented and signed on the dotted line. There's been a lot of speculation in the past but this is the real deal.

"The rest of the band was really up for it, especially when they realised the amount of money on the table.

"But Ian has forged a really successful solo career and wasn't very receptive to their plans. It's taken a while but he's finally come around to the notion."

Despite their continuing cult status, the band largely missed out in financial terms. 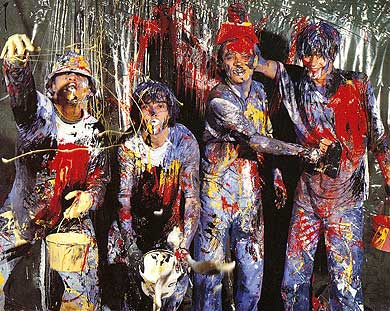 Only last month the bass player, Gary 'Mani' Mountfield, now with Primal Scream, admitted that he and the rest of the band signed with Silvertone because they were hungry.

"In essence, we signed to Silvertone 'cos we were starving and penniless and they gave us money to buy an Italian on the way home. That's the God's honest truth. They bought us an Italian and we dropped our collective knickers.

"We could have hung out for a major, but the time was right. We knew as we signed that it wasn't the best deal in the world. But we had to get the songs out."

The band released their second and final album, 'Second Coming', in 1994.

However, it was their debut that won the most accolades, and even in recent years it has continued to feature highly in lists of top 100 albums.

independent.co.uk
Last edited: Mar 18, 2009
You must log in or register to reply here.
Top Bottom