The defeat of terror - Why everyone in Britain should light a bonfire tonight.

On the 5th November 1605, Guido (Guy) Fawkes and his cronies tried to blow up the Houses of Parliament with barrels of gunpowder whilst the Monarch - King James I (of England) VI (of Scotland) - was sitting in it. But his plot was foiled by the authorities. Since then, every 5th November, the British celebrate the foiling of this plot by having fireworks displays and bonfires and burning effigies of Guy Fawkes on the tops of the bonfires. But one Left Wing-run council in London - Tower Hamlets - has said that they won't celebrate Guy Fawkes Night this year but will instead celebrate a Bengali festival, all in the name of political correctness and "diversity."

But Tristram Hunt, lecturer at Queen Mary, University of London, says that everyone in Britain tonight should light a bonfire to signify the defeat of extremism and terrorism.......

Why everyone in Britain should light a bonfire tonight 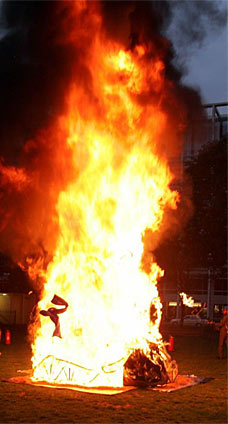 "We did Guy Fawkes last year' was how Tower Hamlets Council explained its decision to scrap Bonfire Night.

In place of gunpowder, treason and plot, there would be a cross-cultural tale of The Emperor And The Tiger, complete with drummers, dancers and a mechanical tiger.

But the great joy of Bonfire Night lies in its regularity. In our increasingly secular age, it constitutes a small but important part of the calendar of civic life.

The fireworks and fires of November 5 not only bring local communities together, but help to connect us with a broader sense of British heritage and identity.

Behind the fun of Guy Fawkes Night lies a telling part of our island story. One that recently arrived immigrant communities in areas such as Tower Hamlets should, more than most, have the opportunity to understand.

For what a history it is. On November 5, 1605, in cellars beneath the Houses of Parliament, a Catholic soldier named Guy Fawkes was discovered with 36 barrels (some 5,500lb) of gunpowder.

The only man ever to enter Westminster with honourable intentions, as the joke goes, Fawkes planned to blow up King James I and the entire political class at the State opening of Parliament.

Some centuries later, Karl Marx was so enamoured of this plot he named his favourite son Guido in honour of Fawkes.

What drove Fawkes to attempt this act of mass murder was not politics but religion. Like some of today's home-grown terrorists, Fawkes was convinced the state was intent on undermining his faith. In this case, Catholicism.

Appalled at James I's commitment to the Protestant settlement he inherited from Elizabeth I, Fawkes tried to change the nation's faith through force.

In effect, he was bringing a religious war that had been raging across Europe between Protestants and Catholics on to English soil. Unfortunately for Fawkes, he and his co-conspirators quickly faced a grisly death.

Meanwhile, Parliament reconvened and instituted 'a public thanksgiving to Almighty God every year on the fifth day of November.'

From the beginning, it was about more than just saving King and Parliament. The November 5 events fed into a broader sense of British identity linked to the Protestant faith.

Central to this was the sovereignty of Westminster. On the Continent, Catholicism and absolutist monarchies went hand in hand. In England, the Reformation and the split from Rome had been sealed through parliamentary statute.

It was Fawkes's ambition to destroy both the politics and religion of Protestantism. And when, later in the 1600s, MPs feared King Charles I was intent on the very same, the scene was set for the English Civil War.

His finest tool was the King James Bible: a truly comprehensive translation of Holy Scripture that united scholars from across the nation and put Protestantism into the popular tongue.

Along with Thomas Cranmer's Book Of Common Prayer and Foxe's Book Of Martyrs, it was part of a literature that helped to codify a culture in a proudly English language.

In their wake came the works of Shakespeare, Milton and Bunyan. The Protestantism Guy Fawkes tried to destroy was about more than doctrine; it was about an emergent national identity.

November was a particularly special month for this Protestant mindset: Queen Elizabeth had come to the throne in November 1558, the defeat of the 1588 Spanish Armada was commemorated in November and in November 1688 Prince William of Orange set sail on his Glorious Revolution to defend Protestantism and the British Constitution.

As one historian writes: "November was the month when bells, bonfires and fireworks made the English and the Scots pleased to be Protestant."

Today, that Protestant heritage has been largely forgotten. Only in the raucously anti-Catholic effigies on display in Lewes, East Sussex, does Bonfire Night retain its sectarian sensibility.

On 5th November, the people of the town of Lewes, East Sussex celebrate it differently. In their hugely anti-Catholic ceremony, they burn crosses and dress up in old-fashioned clothing.

The cultural tsars of Tower Hamlets welcome that decline in historic symbolism.

Liz Pugh, producer of The Emperor And The Tiger festivities, has condemned the anti-Catholic heritage of Bonfire Night, announcing: "We no longer want to be involved in that."

And, in our modern, multicultural age, is she right? Should Bonfire Night simply be a fireworks party devoid of its history?

That would be a mistake. The religion may no longer resonate, but to deny the Protestant component of November 5 is to deny the past.

And, as the recent History Matters - Pass It On! campaign by the National Trust has shown, more and more people want to be informed about British history.

Of course, it must be done creatively. And the Guy Fawkes story offers itself up for interpretation in numerous ways.

Today, we are facing similar debates as in the 17th Century about the violent role of religion in public life, about the emergence of terrorist groups from faith communities and about the interplay of global conflicts on domestic soil.

And the anti-Catholic reaction the gunpowder plot spawned - with its crackdown on churches, discrimination and mob violence - has been compared to the kind of difficulties Muslim communities face in the wake of 9/11 and 7/7.

Moreover, the celebration of Bonfire Night is not simply the story of white Anglo-Saxon males, as some PC protagonists might fear.

With the growth of the British Empire, it began to be commemorated around the world. In New Zealand, South Africa and the Caribbean, the Guy Fawkes history was supplemented with indigenous festivals.

So, as we light our bonfires tonight, we should recall that over the centuries, November 5 has grown to signify a certain ideal: the defeat of religious extremism and the central place of Parliament, self-government and the Protestant legacy in British public life.

It is an inheritance that people of all faiths, and none, can value and enjoy.

Guy Fawkes, Guy Fawkes, 'twas his intent
to blow up the King and the Parliament.
Three score barrels of powder below,
Poor old England to overthrow:
By God's providence he was catch'd
With a dark lantern and burning match.

The following verses, though originally part of the rhyme, are usually left out of modern day recitations for the inflammatory anti-Catholic remarks:

A penny loaf to feed the Pope.
A farthing o' cheese to choke him.
A pint of beer to rinse it down.
A faggot of sticks to burn him.
Burn him in a tub of tar.
Burn him like a blazing star.
Burn his body from his head.
Then we'll say ol' Pope is dead. 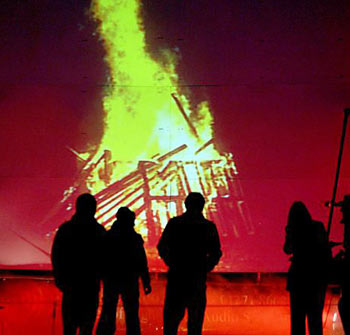 Health and safety killjoys put on this virtual fireworks display at a rugby club in Ilfracombe, Devon (it was all done on a giant screen). Elsewhere, it was business as usual on Bonfire Night.
-------------------- 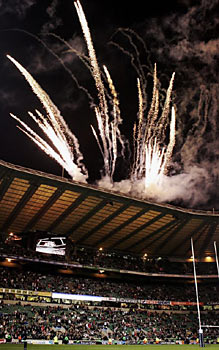 Fireworks explode over Twickenham Stadium's north stand after the rugby match between England and New Zealand in London. This was because of Guy Fawkes Night and also to celebrate the opening of the new stand which raised the capacity of the England rugby union team's stadium to around 85,000. Unfortunately, New Zealand beat the World Champions 41-20 in front of a record crowd of 82,000. Not only was it was it the biggest crowd ever at Twickenham, but it was also England's biggest ever defeat at home.
---------------------- 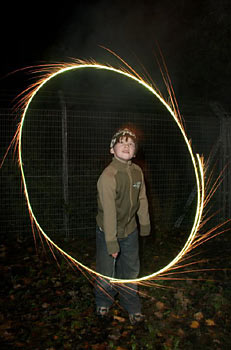 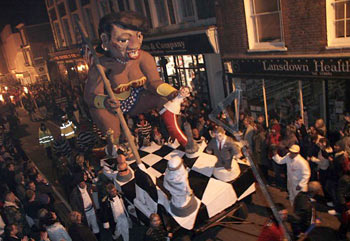 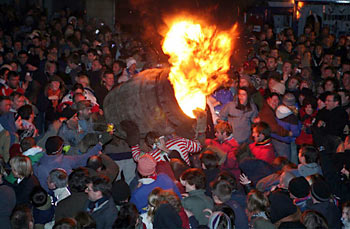 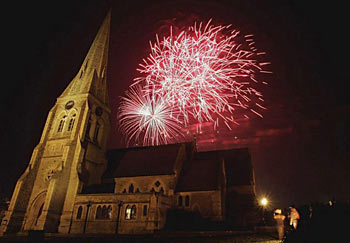 dailymail.co.uk
You must log in or register to reply here.
Top Bottom