SPYING ON CANADIANS: Trudeau, Face Facts, And Stop Relying On The 'Disinformation' Crutch

SPYING ON CANADIANS: Trudeau, Face Facts, And Stop Relying On The 'Disinformation' Crutch

I couldn’t give two shits if Trudeau f*cling swore (as a distraction for the media as we are seeing right now) in parliament, But the big thing is the spy craft (training mission over Ottawa during a protest? Yeah…).

But what we should really be concerned about are his statements in response to the question that prompted the alleged dropping of an F-bomb. This post and the one above it should be in the thread about the liberal/NDP censorship Bill where they want to silence conflicting opinions disinformation!!!

Trudeau was being asked about flights operated by the military, flying over Ottawa for several days during the Freedom Convoy demonstrations. Postmedia reporter David Pugliese has confirmed the flights were operated by Canadian special forces members.

The plane is equipped with equipment that allows for the interception of cellphone calls, radio transmissions and sensors that would allow for the tracking of individuals and vehicles on the ground.

He claims they were only training flights, though, so don’t be worried and stop spreading fake news

“What the member opposite just engaged in is dangerously close to misinformation and disinformation designed to gin up fears and conspiracy theories,” Trudeau said.

Did the military train their members to use this plane by eavesdropping on protesters gathered in front of Parliament? If so, did they turn over what they heard, recorded and collected to the government or police?

There are questions about whether such flights and surveillance of Canadians would be considered lawful. Those questions need to be answered but the Trudeau response is to call this misinformation and disinformation and try to move on.
——————————————————-
The most famous lie that Trudeau has told to Canadians came in February 2019. I was standing steps away from him when he was asked multiple times about a Globe and Mail report that he had meddled in the criminal prosecution case for SNC-Lavalin and had removed Jody Wilson-Raybould as justice minister because she refused to assist him in that.

“The allegations in the Globe story are false. Neither the current nor the previous attorney general was ever directed by me or by anyone in my office to take a decision in this matter,” Trudeau said.

He stuck to that line for a long time, but the truth came out and we found out the Globe was right, and Trudeau was spreading what he would now call disinformation.

It shouldn’t matter what your thoughts or feelings are on the convoy, using the military to spy on Canadians is a serious matter. We deserve the truth.

It has to be noted that the Trudeau government wants to use legislation to regulate misinformation and disinformation online. Will that now include regulating news stories that are true but make the government uncomfortable?

Do we want to give this government that is so comfortable with lying the ability to also say what can and can’t be said online?

It’s a dangerous path to be going down and far more serious than whether Trudeau once again showed contempt for the House by swearing. 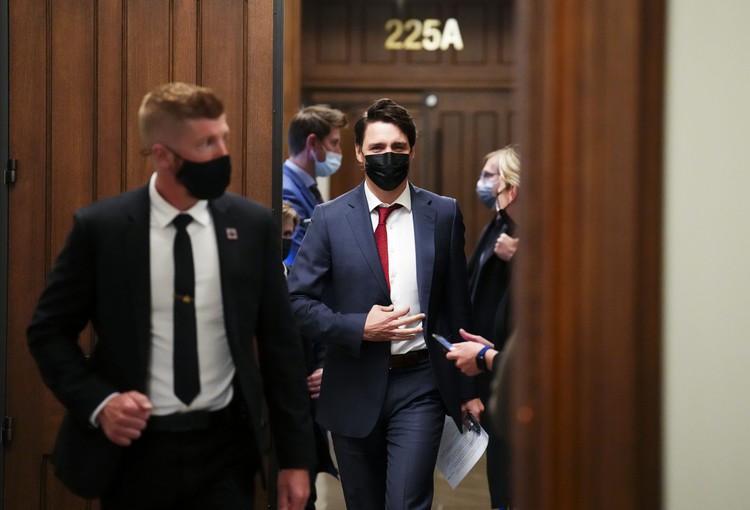 We woke up one morning and Hitler was in complete control .
Reactions: petros

What a despicable person!
Reactions: petros
You must log in or register to reply here.
Top Bottom