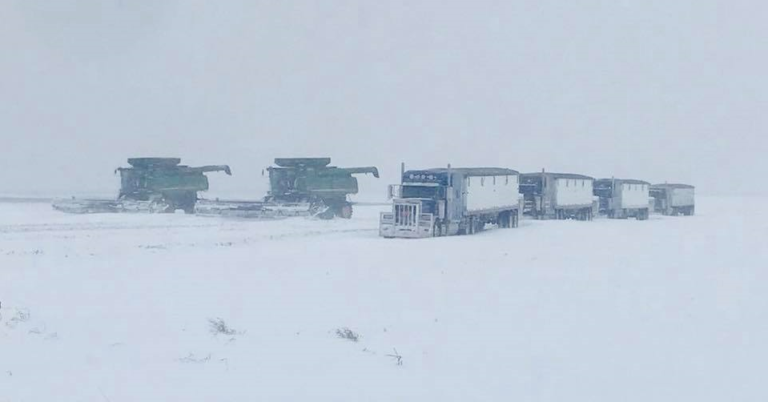 The "food crisis" nears and nary a peep.

petros said:
I shouldn't pay attention when O&G companies are lobbying in favour of Carbon Taxes as I see huge subsidies for "green energy" going to said O&G companies.
Click to expand...

Not to mention the Carbon credits they collect from the projects to offset the Carbon tax in construction, the product itself they pass on to the consumer.

The "food crisis" nears and nary a peep.
Click to expand...

Could be worse, they could be picking up a herd of critters instead.

What do you think the critters were going to eat?

Who do you think would be eating the critters?? The same ones eating the stuff the grain that is being picked up makes. At least the snow kept the frost off the seeds, the already ripe seeds. The grain drying bill will be very high, so what.

You cannuck make this Sh*t up!

A record-breaking snowstorm and record cold temperatures are causing many to ask, what of the "warmest year ever?" -- as wet fields prevent harvest and planting of winter crops. Start growing your own food today.
https://www.youtube.com/watch?v=P66sZYQR9dA&list=PL553ZV44RvsrxTPjxMtrDj_Hvur7KmLdW&index=3&t=0s
C

God is angry with you for your sin and iniquity.

MHz said:
Who do you think would be eating the critters?? The same ones eating the stuff the grain that is being picked up makes. At least the snow kept the frost off the seeds, the already ripe seeds. The grain drying bill will be very high, so what.
Click to expand...

The grain is garbage. No even fit for feed.

Curious Cdn said:
God is angry with you for your sin and iniquity.
Click to expand...

I don't live there any longer. It's been 2 years.

Nah, we are too busy laughing at you being used by the Rockefellers.

Cause someone on Fakebook says so

Nice weeather here, still. We haven't even had frost yet, down near the Lake.
​

petros said:
The grain is garbage. No even fit for feed.
Click to expand...

You still have to pick it up so you can plant in the spring, Insurance company pays up then. It isn't like the crop was the way to an early retirement for anybody in the planting and harvesting end of the 'company farm'.

$1M worth of combines and the same in trucking power is all what small town Sask is all about eh??

Farmers are battling winter conditions to bring in billions of dollars worth of crop still lying in prairie fields, but it isn’t the first time.  | William DeKay photo
Farmers are battling winter conditions to bring in billions of dollars worth of crop still lying in prairie fields, but it isn’t the first time.
“We’ve done our fair share of winter combining over the years,” said Neil Jakubowski, who farms near Neepawa, Man.
“Anybody that grows any amount of corn has at one point done a little bit in the snow.”
Jakubowski said he’s combined lots of corn, sunflowers and a little bit of canola during the winter, and he relayed a few tips.
He said the temperature must be at least -10 C, and preferably -15 C, before growers should attempt winter combining.
“What that does is, it keeps the snow from melting in the combine and gumming up your sieves and plugging everything up,” Jakubowski said.
“You’ll think it’s fine, like the snow will seem fine going in the combine, but the heat through the combine melts it enough that it starts sticking and gumming things up.”
Snow conditions are usually the determining factor in deciding whether winter combining is possible.
“Fluffy snow blows out like its chaff,” Jakubowski said. “One time we combined sunflowers, it was snowing so hard the highways were closed. But it was cold and you didn’t get any snow in the sample, it just blew it right out the back.”
However, when snow melts, little ice pellets may form that can be impossible to separate from grain.
“I had some canola years ago, we had a skiff of snow go through and it took forever to melt. What happens is, it melts and it gets those ice pellets. You end up with a really tough sample,” he said.
“You can put it through the combine and it will blow the fluffy stuff out, but those ice pellets cause a lot of trouble.”
Jakubowski added that growers should let their combine’s temperature equalize with the outside before putting it to work after pulling it out of a heated shop.
“You’ll go to the field and freeze your sieves up right off the start and you’re done.”
He said settings for winter combining is much the same as fall combining.
“Corn and sunflowers, I’ve never noticed a difference. With canola, it’s going to be like doing a tough swath. You just have to speed your cylinder up … just to get it through the combine.”
Jim Hale farms near Lancer, Sask., and he has on a couple of occasions combined flax in the winter. He said a week of below -20 C temperatures may help growers get their crops in because the cold pulls humidity out of the air.
“Years ago in kind of the haste to get things done, we did about 600 acres or so (of flax) when it was not fit, and I actually lost a couple bins because of that. If I had known it was going to work so well after it hit - 20 C for a while, I would have left all of it,” Hale said.
“It cut better, it went through the machine better, it chopped better, and it tested better. But that’s hindsight being 20- 20.”
Of the canola still left out under the stars, Angela Brackenreed, agronomy specialist at the Canola Council of Canada, said it is comforting to know that growers won’t immediately see any massive deterioration in quality in either swathed or standing canola with these precipitation events.
“At this point, I don’t think we should be anticipating major quality deterioration. What we can expect though is a crop that was mature and dry is not going to be dry any more,” Brackenreed said.
By springtime, though, that will have changed.
“There will certainly be losses in yield and losses in quality come the spring time when they can get it off. But sometimes, there is just no other option but to do that.”
Of the canola yet to be harvested, Brackenreed said the standing canola will likely dry faster, and snow will persist longer in swaths.
However, wet snow causes lodging, and the ground might dry faster where canola has been swathed, which can allow equipment to get onto the field sooner
“The other side of it is when it’s in the swath, the canola is a little safer, a little more protected from the elements and less prone to shatter loss because of a snowfall event and volatile weather,” she said.
Producers shouldn’t be overly concerned about swathing canola with snow on the ground.
“Unless it’s limiting the operation itself, the snow shouldn’t add any issues,” Brackenreed said.
“We just need to think of it as moisture more than anything and we would swath when it’s raining. So if it’s possible to get the swather across the field and the snow isn’t so much that it’s actually limiting the ability to cut that crop and put it into a windrow, then I don’t see any other major limitations of swathing with snow.”
When producers bring in tough canola, it’s usually good to get it off the farm as soon as possible.
“That requires a conversation with the elevator on what moisture are they willing to accept, what’s the drying fee, etc.,” Brackenreed said.

Can the North Atlantic handle such rapid warming? lol

I've learned from experience how to treat that kind of asshole!

JLM said:
I've learned from experience how to treat that kind of asshole!
Click to expand...

In cliffy's case it was to not ask any questions even though my version was new to him. That a standard formula for success for teachers and students in the Residential School system.
You must log in or register to reply here.
Top Bottom