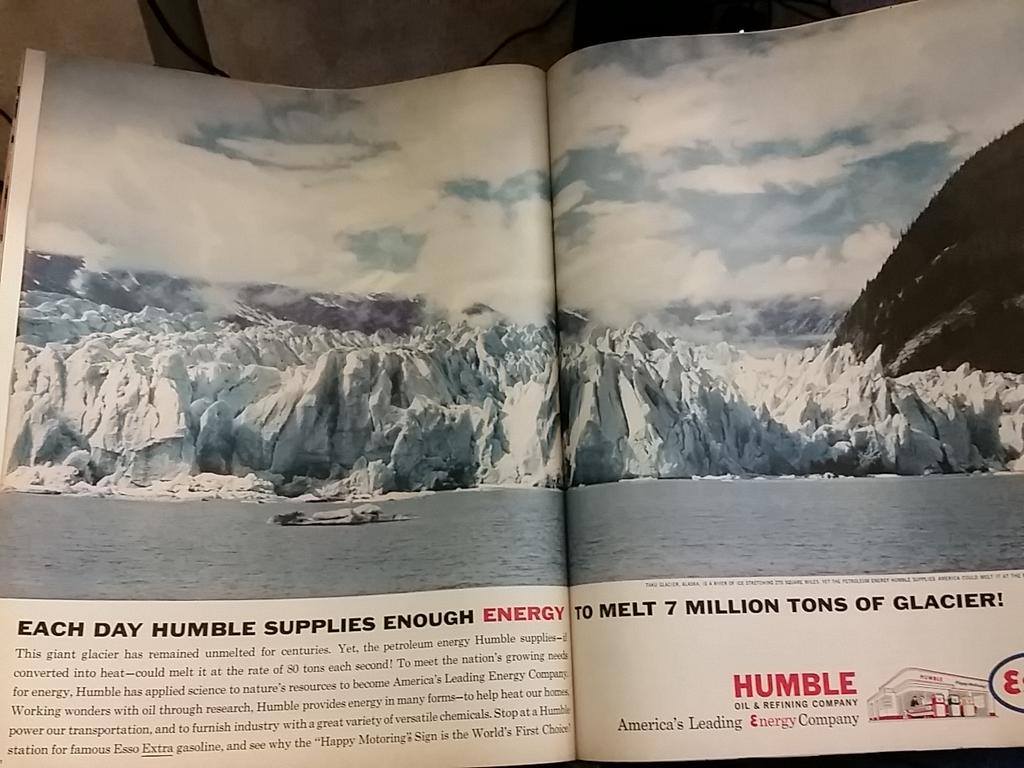 LOL maybe it's the cut in profits, I get my fuel for $0.83 a litre on the Akwesasne Indian Reserve.

Benefits of living in Ontario.
T

B00Mer said:
LOL maybe it's the cut in profits, I get my fuel for $0.83 a litre on the Akwesasne Indian Reserve.

Ummmmmmm, no, it's not because of profit status that they don't advertise like that anymore.........

Despite its efforts for nearly two decades to raise doubts about the science of climate change, newly discovered company documents show that as early as 1977, Exxon research scientists warned company executives that carbon dioxide was increasing in the atmosphere and that the burning of fossil fuels was to blame.

The internal records are detailed in a new investigation published Wednesday by InsideClimate News, a Pulitzer Prize-winning news organization covering energy and the environment.

The investigation found that long before global warming emerged as an issue on the national agenda, Exxon formed an internal brain trust that spent more than a decade trying to understand the impact of rising CO2 levels in the atmosphere — even launching a supertanker with custom-made instruments to sample and understand whether the oceans could absorb the rising atmospheric CO2 levels.

They don't have to advertise any more; they own the government so they don't give a sh!t what people believe or want. Besides, they have greedy sheeple like Slave, Petroglyph and Rummy to spread lies and attack anybody who disagrees with their agenda.

Greedy people with jobs. See ya at the pub on welfare Wednesday.

Cliffy said:
They don't have to advertise any more; they own the government so they don't give a sh!t what people believe or want. Besides, they have greedy sheeple like Slave, Petroglyph and Rummy to spread lies and attack anybody who disagrees with their agenda.
Click to expand...

I'm voting for Suncor this election... Let's see, that'd be PetroCanada which was PET's brainchild, so I suppose that I'll be supporting Justine

I'm voting for the Union coalition that did the physical work.

Which is the banking syndicate party that did all the underwriting?

Who backs the Credit Unions?

petros said:
Who backs the Credit Unions?
Click to expand...

We haven't touched on the real finance guys in terms of bookies and loan sharks... I'm guessing that this would be the Dippers

Well damn eh? Who is remaining to blame?

Harper, of course. The Source of All Evil.

Full moon is when? 28th? I still have a week to buy a sacrificial goat.

petros said:
Full moon is when? 28th? I still have a week to buy a sacrificial goat.
Click to expand...

The preparations are fairly extensive. The pentagram has to be geometrically perfect, and you need to boil the skulls you put the black candles on to remove every last scrap of flesh.

I want those skulls clean enough to eat off of!
T

It's one thing to knowingly deceive and confuse the public about the reality of climate change but when you're also misleading shareholders into how climate change might affect the cash flow from their investments, not the environment but cash flow, well, that's a call to arms.

In a move that could ripple through the fossil fuel industry (link is external), New York Attorney General, Eric Schneiderman, has subpoenaed Exxon's records, documents and emails pertaining to climate change.


The focus includes the company’s activities dating to the late 1970s, including a period of at least a decade when Exxon Mobil funded groups that sought to undermine climate science. A major focus of the investigation is whether the company adequately warned investors about potential financial risks stemming from society’s need to limit fossil-fuel use.

Kenneth P. Cohen, vice president for public affairs at Exxon Mobil, said on Thursday that the company had received the subpoena and was still deciding how to respond.

...The people with knowledge of the New York case also said on Thursday that, in a separate inquiry, Peabody Energy, the nation’s largest coal producer, had been under investigation by the attorney general for two years over whether it properly disclosed financial risks related to climate change. That investigation has not been previously reported, and has not resulted in any charges or other legal action against Peabody.

...The Exxon Mobil investigation might expand further, to encompass other oil companies, according to the people with knowledge of the case, though no additional subpoenas have been issued to date.

There is now a solid scientific consensus that any hope we may have of keeping global warming within the 2 degree Celsius target will require that we leave about 80% of known fossil fuel reserves in the ground, unburned, and effectively stranded. The fossil fuel giants continue to carry those reserves on their books as assets and at "face value" that may be wildly overstated. This creates a "carbon bubble" that is expected to burst, literally wiping out the value of the energy giants and their shareholders' investments.

No one advertises like they used to except maybe the hooker on the street corner.

I miss all the cool tiger stuff Esso used to give away.
T

Back in 1977, ExxonMobil's senior scientist told the company's management committee that humans are probably causing the planet to warm through all our burning of fossil fuels. Months later, Exxon launched a massive program to further examine the link, research that included spending over $1 million on a tanker that could measure how quickly oceans were absorbing carbon dioxide.

You probably figured out how this story ends. A few years later, after warnings about climate change prompted politicians to start talking about maybe doing something about it, the Irving-based oil giant suddenly axed its research program and then spent a few decades pretending that man-made global warming isn't real.

Exxon's early research into global warming was uncovered several months ago by the scrappy environmental news website InsideClimateNews. In the aftermath of their report, House Democrats and others have called for the Department of Justice to launch a federal investigation into Exxon.

Texas Congressman Lamar Smith has a different idea. Smith, who chairs the House Committee on Science, Space and Technology, is hard at work trying to subpoena a group of government scientists who published a study last year yet again suggesting that the planet is warming because of humanity's use of fossil fuels, just like those Exxon scientists said decades ago.

Lately, some Republicans have claimed that global warming is slowing down, but the scientists in the National Oceanic and Atmospheric Administration published research in the journal Science contradicting that claim, with findings of their own showing that nope, sorry, global warming really isn't slowing down. Smith is not happy with the NOAA's work.

Smith, a man who believes that "throughout history, marriage between a man and a woman has been the cement that has held civilizations together," is an interesting choice to chair the science committee.


Since 2010, Smith has enjoyed hundreds of thousands of dollars in campaign donations from industries like oil and gas and companies getting sued for exposing people to asbestos. He has claimed that global warming is a religion and once wrote in a newspaper that “climate alarmists have failed to explain the lack of global warming over the past 15 years." And now that the NOAA has in fact explained the "lack of global warming," with a study saying there isn't a lack, Smith is pressing the NOAA's scientists for answers about how they came to a conclusion that dares fly in the face of what Smith, who is not a scientist, believes.

On November 4, Smith used his authority as a committee chairman to demand that the NOAA scientists send him a stack of documents related to their research — including all communications the scientists made to each other. "...your failure to comply ... may expose you to civil and/or criminal enforcement mechanisms," his letter warned. Smith's reason for the subpoena is vague. In another letter Smith wrote on November 19, this time to the U.S. Department of Commerce, he claimed that a whistle-blower told him the study was "prematurely rushed to publication ... [raising] concerns that it was expedited to fit the Administration's aggressive climate agenda. "

Smith's subpoena and accusations were swiftly criticized by Dallas' own Representative Eddie Bernice Johnson, who is also on the science committee. "In six separate, and increasingly aggressive letters, the only thing you accused NOAA of doing is engaging in climate science," Johnson fired off to Smith in a letter of her own.

So far, the NOAA has agreed to show Smith's science committee documents from the research but is refusing to turn over its scientists' communications. “Because the confidentiality of these communications among scientists is essential to frank discourse among scientists, those documents were not provided to the committee,” the agency told Nature last month. “It is a longstanding practice in the scientific community to protect the confidentiality of deliberative scientific discussions.”

Walter said:
No one advertises like they used to except maybe the hooker on the street corner.
Click to expand...

That's right. When was the last time that you saw "Better living through Chemistry" like DuPont used to say?
You must log in or register to reply here.
Top Bottom