Tecumsehsbones said:
Whatever it takes to divert attention from a clear, specific, racist mass murder motivated by White supremacy.
Click to expand...

We used to play that game when children , everyone died . Why do you want to play ?

Serryah said:
The fact this 18 year old drove 200 miles just to do this says this wasn't just a 'normal mass shooting' event. It'd be on par with the guy who shot those concert goers in 2017. This kid KNEW what he was doing, what he wanted to do, and did it.

It doesn't belittle other mass shootings - any mass shooting is terrible - but this was especially so because of the planning and driving so far to do it.
Click to expand...

Agreed, this is not normal, if there is such a thing as a normal mass shooting. However, this does not make every white male a racist as the MSN and Biden want to imply.
Reactions: taxslave and Serryah

harrylee said:
Agreed, this is not normal, if there is such a thing as a normal mass shooting. However, this does not make every white male a racist as the MSN and Biden want to imply.
Click to expand...

WTF is a "normal" mass shooting?

"Normal", IMO, would be just some crazy idiot shooting up things for no stated reason.

Whereas this kid specifically went out of his way to kill people of one race type.

Tecumsehsbones said:
Well, it's hard to argue with Boomster's facts. He's fully accounted for 200% of the homicides.
Click to expand...

Well I wouldn't go that far but he's right in this case.
Reactions: B00Mer

Dispatcher may be fired for allegedly hanging up on Tops worker during massacre
Author of the article:Washington Post
Washington Post
Andrea Salcedo and Timothy Bella, The Washington Post
Publishing date:May 19, 2022 • 18 hours ago • 4 minute read • Join the conversation

A 911 dispatcher who allegedly hung up on a Tops employee trapped inside the Buffalo supermarket during Saturday’s mass shooting that killed 10 people has been placed on administrative leave and is facing possible termination, according to county officials.


Latisha Rogers, an assistant office manager at the Tops supermarket, told the Buffalo News and WGRZ that she called 911 and whispered to the dispatcher in hope of making the official aware of the mass shooting unfolding at the grocery store. But instead of assistance in a moment when she was “scared for my life,” Rogers said the 911 dispatcher dismissed her with “a very nasty tone.”

“The dispatcher comes on and I’m whispering to her and I said, ‘Miss, please send help to 1275 Jefferson there is a shooter in the store,'” Rogers told WGRZ. “She proceeded in a very nasty tone and says, ‘I can’t hear you, why are you whispering? You don’t have to whisper, they can’t hear you,’ so I continued to whisper and I said, ‘Ma’am he’s still in the store, he’s still shooting! I’m scared for my life, please send help!’ Out of nervousness, my phone fell out of my hand, she said something I couldn’t make out, and then the phone hung up.”


Erie County Executive Mark Poloncarz said at a Wednesday news conference that the 911 dispatcher has been placed on leave and could be fired by the end of the month. The dispatcher, who has not been publicly identified, has been on the job for eight years, according to the county.

“The individual was put on administrative leave pending a hearing which will be held on May 30 in which our intention is to terminate the 911 call taker who acted totally inappropriately not following protocol,” he said.

A spokesperson with CSEA Local 815, the union that represents the dispatcher, said they could not comment on disciplinary actions or ongoing investigations.

The announcement comes as Payton Gendron, the 18-year-old charged in connection with the killing, has been indicted by a grand jury and will remain in custody after a brief court appearance on Thursday. Gendron has pleaded not guilty to the murder charges.


Authorities say the alleged white supremacist targeted the Tops supermarket in the largely Black neighborhood because of the hate he harbored for minorities, fueled by an obsession with conspiracy theories that proliferate on the Internet. Gendron, who police say traveled three hours from his home in Conklin, N.Y., to target Black people with his Bushmaster XM-15 rifle, is believed to have posted a screed online that revealed a paranoid obsession with a racist conspiracy theory claiming White Americans are intentionally being replaced by non-White immigrants.

Investigators from the FBI, Bureau of Alcohol, Tobacco, Firearms and Explosives, and the Justice Department’s civil rights division are combing through evidence in Buffalo and online to piece together the scope of the mass shooting and the motivation for it. Federal prosecutors are also conducting a parallel investigation to determine whether to charge Gendron with a hate crime, a prospect that could add significant punishment, including the death penalty, according to legal experts.


Rogers had been standing behind the store’s customer service counter when the shooting began. As she ducked down to avoid the gunfire, she hurriedly called 911 at around 2:30 p.m. Saturday. That’s when the Tops employee said the 911 dispatcher flippantly responded to her.

“She got mad at me, hung up in my face,” Rogers told the News. After the dispatcher hung up on her, Rogers told local media that she called her boyfriend and directed him to call 911.

When Rogers made her remarks over the weekend to local media, county officials began to investigate the allegations against the dispatcher. Poloncarz told reporters that Erie County emergency services combed through all of the 911 calls associated with the mass shooting. Officials were able to locate the call in question and found the alleged actions of the dispatcher to be “completely unacceptable,” Poloncarz said.


The dispatcher’s alleged actions “had no bearing on the dispatching of the call,” Peter Anderson, a spokesman for Poloncarz, told WNYW in New York City.

“The first call was dispatched for an immediate police response in approximately 30 seconds,” Anderson said.

While some states allow for 911 calls and transcripts to be released for public inspection, New York state law suggests it is unlikely that the recording of the 911 call will be released. New York County Law 308(4), a measure that all applies to all counties outside of New York City, says that “records, in whatever form they may be kept, of calls made to a municipality’s E911 system shall not be made available to or obtained by any entity or person, other than that municipality’s public safety agency, another government agency or body, or a private entity or a person providing medical, ambulance or other emergency services, and shall not be utilized for any commercial purpose other than the provision of emergency services.”


Rogers emphasized that she was glad some action was taken against the dispatcher for not helping her and others in their time of need. She told WGRZ that she was initially on the fence about the dispatcher losing her job, but has concluded that being placed on administrative leave is not enough.

The Tops employee added, “I just thank God that I’m here ’cause I could have died.” 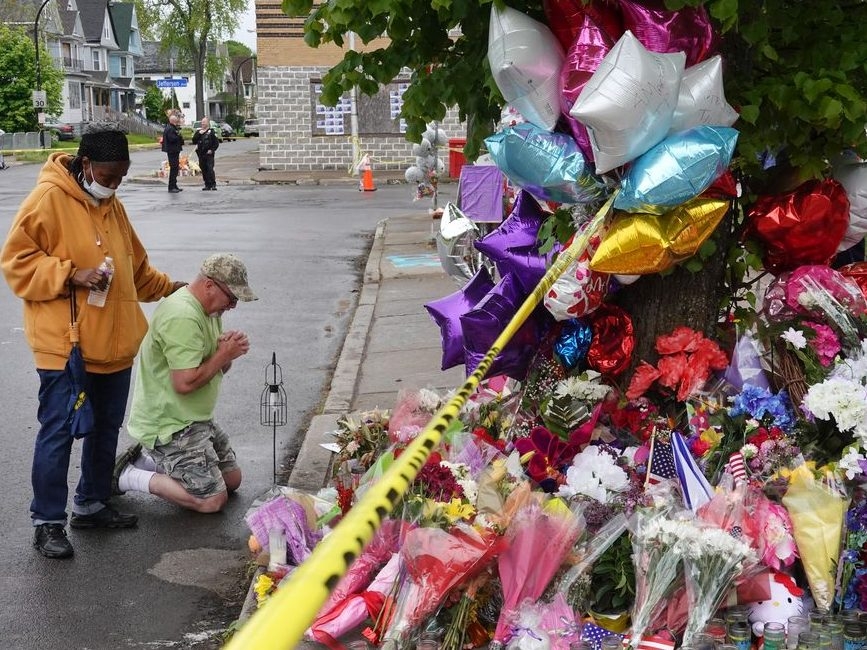 B00Mer said:
The suspect, identified in court as Payton S. Gendron, has been described as an 18-year-old white male with dirty blonde hair.

Kind of reminds me of that black trash guy that shot up many innocent people a few weeks ago in New York. I will be that you would not dare call that black shooter - black trash, now would you, boom-boom? Just asking.
Reactions: Dixie Cup
T

Good old Joe never bothered to go to New York and show up and talk about that black piece of trash that shot up a bunch of innocent people about a month ago. I guess that if it is a white guy that does the shooting, Joe will show up. But if it is a black guy doing the shooting, well then, good old Joe will not show up.

taxme said:
Kind of reminds me of that black trash guy that shot up many innocent people a few weeks ago in New York. I will be that you would not dare call that black shooter - black trash, now would you, boom-boom? Just asking.
Click to expand...

taxme said:
Good old Joe never bothered to go to New York and show up and talk about that black piece of trash that shot up a bunch of innocent people about a month ago. I guess that if it is a white guy that does the shooting, Joe will show up. But if it is a black guy doing the shooting, well then, good old Joe will not show up.

Because if Joe showed up for each black shooting, he would be one busy boy.
Ain't got time fo dat......
Reactions: taxme and taxslave

harrylee said:
Because if Joe showed up for each black shooting, he would be one busy boy.
Ain't got time fo dat......
Click to expand...

They have to report on racist mass murders.

Otherwise, how will the MAGAhats know who their heroes are?
Reactions: Dixie Cup and Serryah

That is what I like about you. You says it as you sees it, boy. Lol.
T

Hey, Chief Spreading Bull, you are such a fkn anti white racist. I am looking forward to the MAGA victory coming up in the midterm elections in November. Vengeance will be our reward. Long live MAGA. Yahoo MAGA.

Considering that most of the recent shooters hate Trump & the Republicans, what does that say for the Democrats? They can spew whatever garbage they want but when the shooters actually WRITE that they're objecting to how the country is run, and that they hate the "right" then obviously they "love" the left which is determined to destroy the country. These shooters are just assisting with the process so the Dems won't call them out b'cuz they're helping with the "cause".

The issue now-a-days is that the Left have taken over the Democratic Party. There may still be the odd "actual" Democrat (e.g. Mansion) that are caught up in this god forsaken ideology (cult?) of the Woke, but until those "actual" Democrats take the bull by the horns and get rid of the bloody Marxists/socialists, their party will not benefit the U.S at all - it will be the Un-united States of America - a socialist state where citizens will "not own anything & be happy". Wow, something to look forward to.
Reactions: Serryah and taxme
You must log in or register to reply here.
Top Bottom