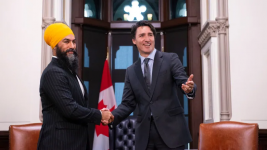 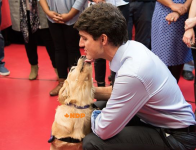 "On Monday, Mr. Singh put forward a motion calling on the government to deliver on the Liberal campaign promise to impose a surtax on banks and insurance companies – and to expand the tax hike to include oil companies, grocery chains and big-box stores."

"Mr. Singh has a news conference scheduled for Tuesday where he plans to talk about how to make life more affordable, given the recent rise in gas and food prices."

Bringing you news that no one else in the media will. This is what I unearthed from paid Globe And Mail article.
Reactions: Mowich and Twin_Moose

I'm not disputing the legitimacy of the content but aren't you one the people clamoring to defund the CBC?
Reactions: Ron in Regina

I know you were born at night but was it last night?

So we have 2 Prime Ministers now eh?
Reactions: Twin_Moose
J

Is this article saying that Justin and Jagmeet are sleeping together? I guess Justin has realized that he needs to sleep with someone, he is not sleeping with his wife. I hope that Jagmeet cleared thi arrangement with his new wife and child!

I'm just getting reports from Jagmeet's wife and child and they have officially authorized the deal!

So, I guess that means no matter what Justin wants, he gets for 3 years?
Yeah....democracy........Bullshit 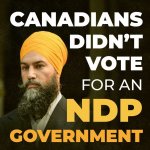 Oooooo I can see it now. 5G installed in teeth.
Reactions: B00Mer and Twin_Moose

harrylee said:
So, I guess that means no matter what Justin wants, he gets for 3 years?
Yeah....democracy........BullshitView attachment 12835
Click to expand... 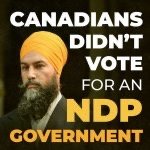 harrylee said:
So, I guess that means no matter what Justin wants, he gets for 3 years?
Yeah....democracy........BullshitView attachment 12835
Click to expand...

Yes Canadians didn’t vote for a coalition if that’s what this is but it is what it is, and yes the NDP didn’t get the most votes but then again neither did the liberal party so, it is what it is.

if Jagmeet wants to sell just in the crown for the next three years then that’s just what we’re going to ride out.
Reactions: Mowich, harrylee and B00Mer

I've decided to leave this pathetic joke of a country

I was born and raised in Alberta.

After hearing the news of a coalition government that will keep the liberals in power until 2025, I have lost all hope and have decided to prepare to leave. There's no value in Canada anymore. What am getting for my tax dollars and by living here?

- we forever pander to the indigenous with no end in sight

- government deficits are out of control and about to get worse

- wages are low and stagnant

- kumbayaism has grasped most Canadians

- we don't even have a culture let alone an identity anymore

- each ethnic group lives in its own separate community

- our parliamentary structure is a joke

- our democracy isn't even a good democracy

- our nation's capital is over a 3 day drive away for many Canadians. I feel like I can't even protest anyway.

- Canada is psychically too big with too much regional diversity

- Fully taxpayer-funded CBC has gone off the rails and Canadians don't seem to care or realize the massive impact it has on our society.

- our government hurts one of their biggest industries; oil and gas, and fails to take advantage of it while importing oil from Saudi Arabia.

- we have too many social programs that don't do very little

- homelessness is out of control

What do you think of this persons post? I feel sad for the person, sounds more like depression and needing help.

No matter who is in charge of this great country, Canada stands out as one of the greatest nations on this Earth..

Not sure where he is thinking of going that is any better??

Well, when the going gets tough, the tough get going.

Where's bunky headed? To what haven of freedom, culture, and self-reliant folk where men are strong, women are kind, and children are attentive and obedient? 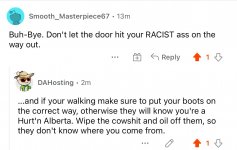 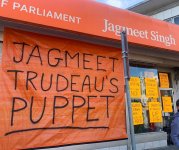