PHNOM PENH, Cambodia - Judges and prosecutors from Cambodia and foreign countries were sworn in Monday to begin the U.N.-backed judicial process to try former Khmer Rouge leaders for genocide and crimes against humanity.

It was a major step forward in the search for justice for victims of the brutal Khmer Rouge regime, whose extremist policies in the late 1970s killed an estimated 1.7 million people. Some were executed, while others died of starvation, disease and overwork.

After decades of inaction and delays, trials are expected to start in 2007, although no date has been set.

"They should not have kept victims like me waiting this long," said Chum Mey, a survivor of the S-21 prison in Phnom Penh, where thousands were tortured and executed. "I am already 76 years old and don't know how long I can wait."

None of the top leaders of the 1975-79 communist regime have been held accountable for the atrocities. Khmer Rouge leader Pol Pot died in 1998, but several of his top deputies, aging and infirm, still live freely in Cambodia.

Seventeen Cambodian and 10 U.N.-appointed judicial officials were sworn in inside the Royal Palace in the capital, Phnom Penh.

"This is the milestone officially marking the beginning of a long process," said Youk Chhang, director of the Documentation Center of Cambodia, an independent group that collects evidence of Khmer Rouge crimes.

Cambodia and the U.N. agreed in 2003 to jointly establish the tribunal.

Monday's ceremony "erases the negative speculation people have had in the past that there won't be any trial" for surviving Khmer Rouge leaders, said Reach Sambath, a spokesman for the tribunal administration office.

He said prosecutors will move into their offices July 10, "a sign the actual trials will start very soon." They will be holding a series of workshops to draw up strategy for convening the trials, he said.

Nuon Chea, who had been the Khmer Rouge's chief ideologue, said he would go before the tribunal if called. As one of the top leaders, he is a likely target for prosecution.

"I will be glad to go so that people in my country and other countries will know the truth of what happened. Whatever they ask, I will tell them," he said in an interview with The Associated Press in the northwestern town of Pailin, where he lives with other former top Khmer Rouge leaders.

"I have responsibility for what happened, not for the killing but for not being able to protect my own people."

Two former Khmer Rouge senior officials, both arrested in 1999, are in detention but were not members of the policy-making inner circle.

Former military chief Ta Mok is being held for war crimes and crimes against internationally protected persons, while Kaing Khek Iev, also known as Duch _ who headed the Khmer Rouge S-21 torture center in Phnom Penh _ has been charged with crimes against humanity. Both men face life imprisonment if convicted.

After the Vietnam left Cambodia, the warring factions came together to form a coalition government. However the Khmer Rouge rouge left the socialist faction and fought the government. The Khmer Rougeleaders were given amnisty many times if they were to lay down there arms. Many chose to do such. Few didn't. One of the Few were the Leader Pol Pot who fought until the very end. After his death the remaining Khmer Rouge surrendered or fell apart.

VICE removed the article and photos later on Sunday, saying they did not meet its editorial standards and it was investigating.


The artist behind the work, Matt Loughrey, declined to comment.

In the article published on Friday, Loughrey said his project to colourize images from the notorious Tuol Sleng prison, or S-21, aimed to humanize the 14,000 Cambodians executed and tortured there.

However, the article caused a backlash on social media after comparisons with the original black-and-white photos showed that some subjects were smiling only in Loughrey’s colour images. The VICE article did not contain the original images.

“To play around by using technology to put make-up on the victims of S21… is a very grave insult to the souls of the victims of #genocide,” exiled Cambodian politician Mu Sochua wrote on Twitter.

Cambodia’s Ministry of Culture had issued a statement calling on VICE to remove the images.

“We urge researchers, artists and the public not to manipulate any historical source to respect the victims,” the ministry said.

Loughrey, who in the VICE interview said he had worked with victims’ families to restore the photos, declined to comment when contacted by Reuters.


VICE removed the article late on Sunday, and on Monday issued a statement.

“The article included photographs of Khmer Rouge victims that Loughrey manipulated beyond colourization,” the statement said, adding they did not meet its editorial standards. “We regret the error and will investigate how this failure of the editorial process occurred.”

At least 1.7 million Cambodians died in the extremist Khmer Rouge’s reign of terror in Cambodia from 1975 to 1979. 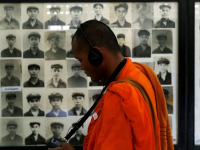