Here is a guy who made jailbreaking look easy.

Jack Sheppard was a thief, robber and burglar in 18th century London.

Despite being jailed five times, he managed to escape FOUR times, even when manacled.

On one occasion he even used a blanket to climb down a wall, and even climbed a chimney.

He was eventually hanged at Tyburn (as was custom, he was allowed a drink in a pub on the way) in 1724, with ONE THIRD of London's population - 200,000 - watching the execution.

And if a prison warden never discovered his knife just before the hanging, the clever Sheppard may even have escaped the execution! 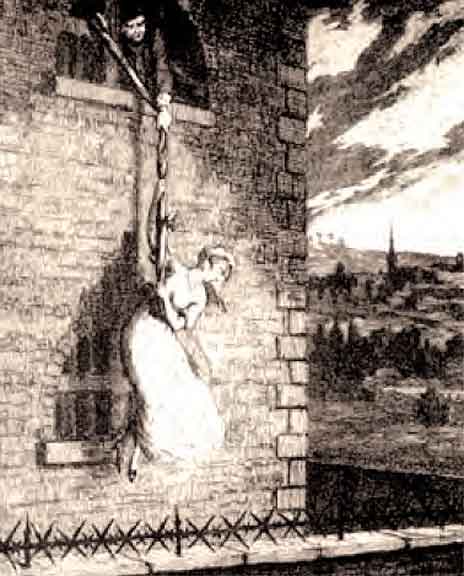 Not to be consused with Jack Shephard from Lost. This Jack Sheppard was a robber in London in the early 1700s. He escaped from prison not once… not twice… not even three times. He escaped four times before finally being hanged for his crimes. His first arrest for theft resulted in his hand being branded, which was common for the time. The second arrest landed him in St. Giles’ Roundhouse, which only lasted for about three hours. He broke through the shoddy ceiling and climbed to the ground by using sheets – just like the movies. When he got to the ground, he managed to blend in with the crowd that had formed below and created a diversion – he started pointing at the roof and yelling that he could see the prisoner, then scooted off in the resulting chaos!

The second time, he was arrested for pick-pocketing and his wife was thrown in the cell with him (as an accomplice). They were sent to the New Prison in Clerkenwell, but managed to file through their manacles before long, removed a bar from the window and again used the sheets to climb down. Then they climbed a 22-foot wall to complete the escape.

Jack Sheppard in his prison cell awaiting execution in 1724

Arrest #3 came after he robbed from his former mentor in carpentry. He was arrested just east of the Tower of London. He was sent to Newgate Prison, but, as usual, not for long. When he had visitors one day, they distracted the guards while Sheppard loosened a bar in the window. He later escaped by removing the bar and then changing into women’s clothes (also thanks to his visitors) so he could just walk away unsuspected.

The fourth arrest sent him back to Newgate, this time to a strong-room called “The Castle”, where he was given leg irons and chained to the floor. By this point, he was getting a little arrogant in his escape abilities and pretty much just laughed at the guards. He showed them how silly their shackles were by finding a small nail on the floor and picking the lock that held him. Their response? More secure cuffs and tighter bindings.

Maybe Houdini should have called himself “Sheppard” (not quite the same ring, I know), because Sheppard escaped again! He picked the lock to his cuffs and removed the chains, but was unable to remove the leg irons. He climbed up a chimney, only to find a bar blocking his way. No matter; he just removed the bar and used it to break through another ceiling. Apparently he broke through six doors until he made his way to the roof of Newgate, made his way to the roof of the house next door, broke into the house, went down the stairs and escaped onto the street without waking anyone up. Keep in mind he still had his leg irons on. Those were removed a couple of days later when he bribed someone to bring him blacksmith’s tools. At such an unbelievable escape, a rumor started circulating around town that the Devil himself helped Sheppard escape.

Sheppard being executed at the Tyburn "Triple Tree" gallows in front of a crowd of 200,000, one third of London's population. Incredibly, he almost escaped this.

His luck ran out after arrest #5, though. He broke into a pawn shop and stole some finery, including a suit, a sword, rings, watches and other jewelry. He was sent back to Newgate where he had round-the-clock guards and was loaded down with 300 pounds of weights. Up to 200,000 people showed up to see him hanged, but not because they were happy to see him die. No, the public actually thought he was great and even petitioned the King to free him. But to no avail. He was hanged for 15 minutes. Even after that, he had one more plan: his friends were to obtain his body quickly and take him to a doctor, who would try to revive him. But the crowds were so huge that his friends couldn’t reach him, and finally, Jack Sheppard met an unescapable end.


On Monday, 16 November, Sheppard was taken to the gallows at Tyburn to be hanged. He planned one more escape, but his pen-knife, intended to cut the ropes binding him on the way to the gallows, was found by a prison warder shortly before he left Newgate for the last time.

A joyous procession passed through the streets of London, with Sheppard's cart drawn along Holborn and Oxford Street accompanied by a mounted City Marshal and liveried Javelin Men. The occasion was as much as anything a celebration of Sheppard's life, attended by crowds of up to 200,000 (one third of London's population). The procession halted at the City of Oxford tavern on Oxford Street, where Sheppard drank a pint of sack.A carnival atmosphere pervaded Tyburn, where his "official" autobiography, published by Applebee and probably ghostwritten by Defoe, was on sale. Sheppard handed "a paper to someone as he mounted the scaffold",perhaps as a symbolic endorsement of the account in the "Narrative". His slight build had aided his previous prison escapes, but it condemned him to a slow death by strangulation by the hangman's noose. After hanging for the prescribed 15 minutes, his body was cut down. The crowd pressed forward to stop his body from being removed, fearing dissection; their actions inadvertently prevented Sheppard's friends from implementing a plan to take his body to a doctor in an attempt to revive him. His badly mauled remains were recovered later and buried in the churchyard of St Martin's-in-the-Fields that evening.

50 acres in Kootenays BC

Was this guy some sort of British hero?
O

It just shows how ****ty security is before.
You must log in or register to reply here.
Top Bottom