According to a report by Politico, the Secret Service attempted to take possession of paperwork documenting the transaction of Hunter Biden buying a gun from a gun store in Wilmington, Del., after the president's son lost the weapon.

On Oct. 23, 2018, Hunter Biden purchased a firearm that was subsequently thrown out into a trashcan behind the gun store by Joe Biden's daughter-in-law Hallie Biden. When Hunter and Hallie later returned to retrieve the weapon, they found it gone.

According to a police report obtained by Politico, Delaware police were concerned that the gun went missing since the trashcan was across the street from a local school.

This is when the Secret Service allegedly got involved, according to two people involved in the incident, one of whom had firsthand knowledge and the other of whom was briefed later by a secret service agent, according to the report.

Allegedly, Secret Service agents approached the store owner and asked to take the paperwork documenting Hunter Biden's gun purchase. The store owner refused, saying he suspected they wanted the documents to cover up Hunter's involvement should the gun turn up in a crime. The paperwork was eventually turned in but to the Bureau of Alcohol, Tobacco, Firearms, and Explosives, which oversees federal gun laws.

The gun was eventually returned by a local man who is known for rummaging through trash in the area.

The Secret Service told POLITICO that it had no record of any agents investigating the incident. However, one law enforcement individual said that the Secret Service offices in Wilmington, Del., and Philidelphia kept loose tabs and had an informal part in the then-former vice president and his family's safety.

https://twitter.com/i/web/status/1375264129301286915
Much attention to the story is focusing on the involvement of two Secret Service Agents at a time when Joe Biden was no longer under Secret Service protection. That is a curious part of the story, but I can imagine several explanations for their interest. I address that aspect in Part Two of this story. I’m more interested in the facts surrounding what Hunter Biden did.

I hope I’m wrong about my prediction that this story will fade quickly. Hunter Biden committed a felony and the evidence comes in the form of his own statements which establish his guilt beyond a reasonable doubt. It’s not just any felony, it is a felony that is regularly prosecuted in every federal judicial district in this country, and in significant numbers on an annual basis — especially when Democrats are running the DOJ.

Rather than re-type all the events, I’m going to just extract from the Politico story the facts which are relevant to Hunter Biden’s crime.

On Oct. 23, 2018, President Joe Biden’s son Hunter and daughter in law Hallie were involved in a bizarre incident in which Hallie took Hunter’s gun and threw it in a trash can behind a grocery store, only to return later to find it gone.
Click to expand...

Just to clarify — which Politico opted to not do in this story — Hallie is Joe Biden’s daughter-in-law because she was married to Joe’s deceased son, Beau, not because she is/was married to Hunter. By October 2018, Hunter was divorced from his wife, Kathleen, and was involved in a romantic relationship with Hallie, his sister-in-law and the widow of Beau. That relationship ended in 2019.

The incident began when Hallie searched Hunter’s pickup, which was parked at her home in Wilmington, because of unspecified “suspicions she had,” according to the Delaware State Police report. Inside the truck, she found a .38 revolver.
Hallie took the gun to Janssen’s Market, a nearby high-end grocery store where the Bidens are longtime regular customers. There, she tossed the gun, wrapped in a black shopping bag, into a trash bin outside of the store.
Click to expand...

Much more in the article

Hunter Biden and his business partner engaged in an effort to assist a fugitive Ukrainian oligarch indicted by his father's administration, an effort that briefly captured the FBI's attention and led one of the lawyers in the case to express concern that using the then-vice president's son might backfire, according to emails, text messages and interviews.

The effort by Hunter Biden and Devon Archer to assist Dmitri Firtash began in spring 2015 when they were contacted by one of the oligarch's associates, and an American lawyer for the oligarch was instructed to provide them an overview of the case, including desires to contact U.S. government officials......Much more

I'm not sure what Hunter Biden's tax issues have to do with Canadians and personally I don't give a rat's ass. It wouldn't hurt to see Trump pony up!

JLM said:
I'm not sure what Hunter Biden's tax issues have to do with Canadians and personally I don't give a rat's ass. It wouldn't hurt to see Trump pony up!
Click to expand...

Is it not a US political thread on CanCon?

Twin_Moose said:
Is it not a US political thread on CanCon?
Click to expand...

Maybe there are 100,000 Yanks in the same boat. Is he someone special?

Nope his father is right now though

Everything posted has been verified not like the Russian disinformation narrative

This is partly why it matters JLM

During the period in question, the Truman National Security Project had Hunter Biden on its board as well as the executive of a consulting firm employed by Burisma Holdings, and the Truman Project allegedly did political work that benefited Burisma’s interests, according to the complaint. Burisma Holdings is the scandal-plagued Ukraine gas company that had Hunter Biden on its board. Joe Biden gave a speech discussing the Ukraine energy sector to the Truman National Security Project’s 2015 conference.


Much more in this LINK
Reactions: taxslave

The memoir failed to crack Publishers Weekly's Top 10 list in its debut week.

As of Friday, first-week sales of "Beautiful Things: A Memoir" were 10,638 copies, according to Publishers Weekly.

The book by President Biden's son came in 12th, just behind "The Calcium Connection: The Little-Known Enzyme at the Root of Your Cellular Health," by Brunde Broady, a book about teeth health......More if you are interested

President Joe Biden hasn’t had much luck or made much of an effort in making good on his call for unity.

But his son Hunter has.

In a new survey shared with Secrets, 68% agree that the Justice Department should appoint an independent special counsel to investigate allegations that the president’s son engaged in shady international business and tax dealings while his father was vice president. Included was the president's brother James, whose healthcare ventures are also in the legal spotlight. 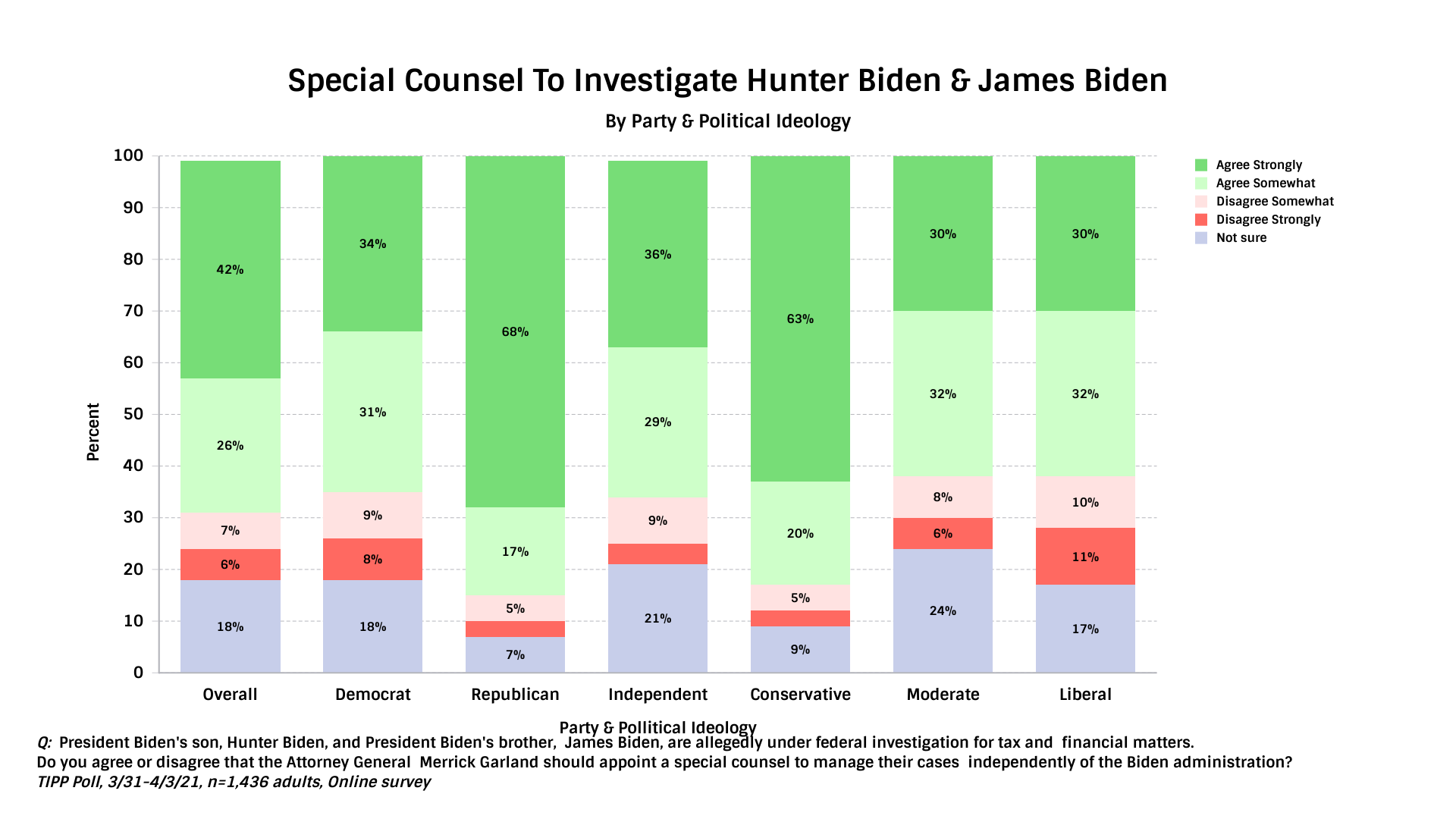 Survey data provided by TIPP and TechnoMetrica
The survey from TIPP Insights is bad news for the Bidens. Not only do 85% of Republicans want a special prosecutor separate from the FBI and the Biden administration appointed, but so do 65% of Democrats and 65% of independents.

But the survey analysis suggested that Democrats and Republicans might have different reasons for backing a special investigation.

"The Biden family matter has been in the minds of the country for a long time. Burisma has become a household name. President Trump raised the issue on a phone call to Ukraine in 2019, which led to his impeachment investigation. The Republican-controlled Senate acquitted President Trump on two articles of impeachment," read the poll analysis.

“Democrats may want to see the Bidens acquitted by an independent counsel to find closure on the issue; Republicans may see the issue as presenting a window of opportunity to study Biden family affairs. Either way, the public has clearly stated they support the appointment of a special counsel,” said TIPP.

EXCLUSIVE: 'Your doggy chain necklace is waiting for you.' Flirty messages from Hunter Biden's Chinese-American secretary, 29, who worked for him when he partnered with the 'spy chief of China' are revealed​