This is going to take a long time to clean up and some people will lose their livelihoods. 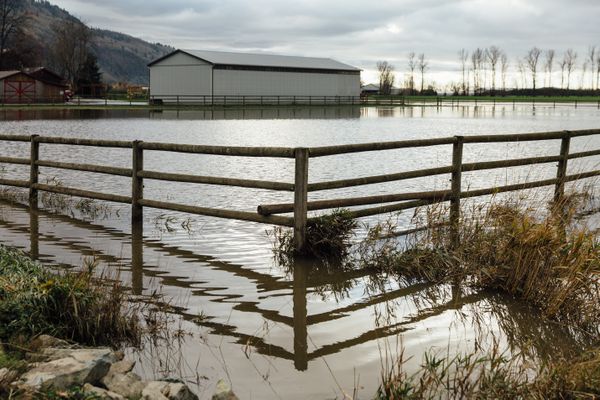 Fields in Abbotsford, B.C., remained covered in water on Nov. 23, just over a week after the 'atmospheric river' dropped more than a month's worth of rain on southern B.C. in less than two days.JACKIE DIVES/THE GLOBE AND MAIL


Casey Guliker burst into tears when he saw what remained at his hog farm in Abbotsford, B.C.

The young farmer and other staff had done their best to protect what they could when heavy rains began falling on Nov. 14, triggering massive flooding that would paralyze much of the province’s southern region. They prioritized their many hogs, moving them to higher ground.

But much of the Sumas Prairie on which his farm is located was completely submerged at the peak of the storm. Marks left on the side of a barn show floodwaters reached upward of two metres; Mr. Guliker’s dog was later rescued from the barn roof.

The farmer says he can’t estimate how many hogs he lost, but says that he returned to a gut-wrenching scene.

“I don’t know how many animals died,” Mr. Guliker said Tuesday in an interview at the farm as he worked to dry out some heavy machinery. “Not all our efforts paid off, but we can rest with a clear conscience that we did the best for the animals.” 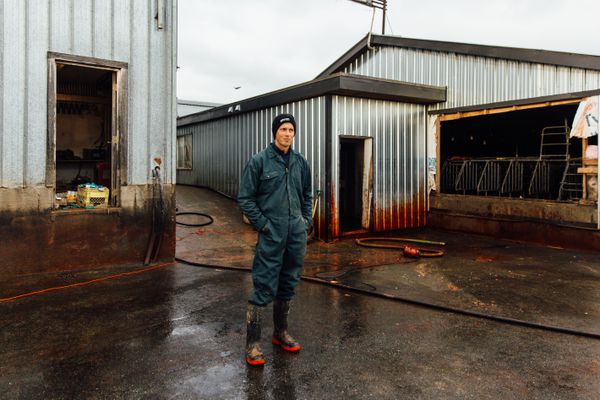 Casey Guliker, top, co-owns a hog farm in Abbotsford. His farm was one of many that flooded: At bottom, Google Earth video of the pre-flood landscape around the Trans-Canada Highway is compared with aerial footage from Nov. 22.PHOTO BY JACKIE DIVES/THE GLOBE AND MAIL; VIDEO FROM GOOGLE EARTH, ANDREA WOO/THE GLOBE AND MAIL
The flood that dumped a month’s worth of rain on to southern B.C. in less than two days created an agricultural disaster in the Fraser Valley, where the bulk of the province’s food production takes place. Multigenerational farmers who watched their family businesses go under, along with their homes, have also been left to deal with catastrophic mortality and biohazard risks from animals caught in the flood. The death toll is, at the minimum, in the tens of thousands.

Blueberry and vegetable crops have also been devastated, with some farmers saying they don’t know if they will spend the next few years replanting and starting over.

B.C. Agriculture Minister Lana Popham, who did a flyover of the Fraser Valley on Tuesday and met with about 30 farmers in Abbotsford, said there were many shared tears and hugs.

“Farmers are really concerned right now about the removal of deceased animals,” she told a news conference on Wednesday. “We do have a location in Abbotsford where people are taking calls; there’s a number where people can call to have animals removed. We know that there’s a lot of grief that farmers are feeling around this issue. Farmers, just know that there are people on the other end of those phones who understand how difficult this is for you.”

Ms. Popham said the province is working with local governments to identify capacity in landfills and possible incineration areas. As well, B.C. is working with Ottawa to develop an agricultural recovery program, the details of which are expected in coming days, she said. 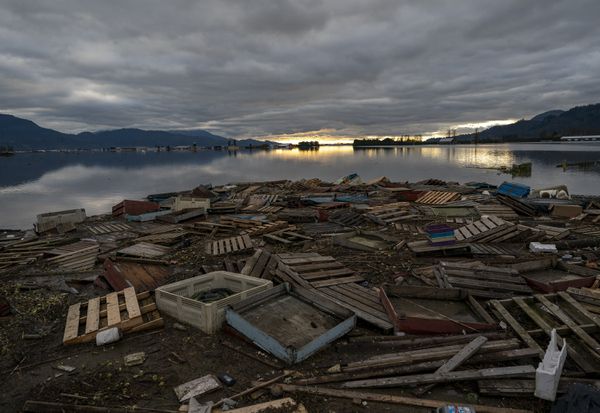 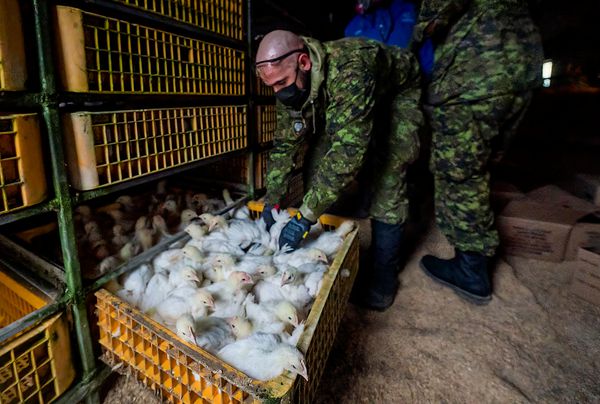 At top, debris from farms lies in the floodwaters in Abbotsford on Nov. 19; a day later, at bottom, members of the Canadian Armed Forces help move chickens from a flood-affected farm.JONATHAN HAYWARD/CP AND REUTERS
In the Sumas Prairie this week, tow trucks could still be seen pulling vehicles out of floodwaters, which have completely enveloped some properties.

At one poultry farm, a front loader cleared liquefied piles of chicken carcasses from their waterlogged barns. Feet and beaks protruded from the brown sludge. Behind the barns, fans blew throughout the farmhouse, drying out structures stripped of drywall as a small crew worked to repair extensive damage from the flood.

The day the rain hit, a huge volunteer effort was mobilized here. Dozens of friends, neighbours and complete strangers – some of whom brought kayaks – helped sandbag around the barn until the last possible minute, when a vehicle could be seen floating down the street and they were all ordered to leave the property. The water reached upward of a metre, killing the chickens below the water line.

The owner says he estimates they saved 50,000 birds but he doesn’t want to think about how many were lost. He tears up, gesturing at the heavy machinery in action, and he doesn’t need to say any more.

The Globe and Mail is not naming the farmer, because he is concerned about backlash from animal-rights groups.

He says the situation has made him “extremely emotional,” and that he will not forget the humanity it revealed. One woman he didn’t know brought over a pot of soup and three children’s drawings, including one of a red barn with a grey roof, along with the words: “I’m so sorry for what happened,” and a heart. The man burst into tears looking at the colourful drawings and said he hoped to one day find the family and thank them. 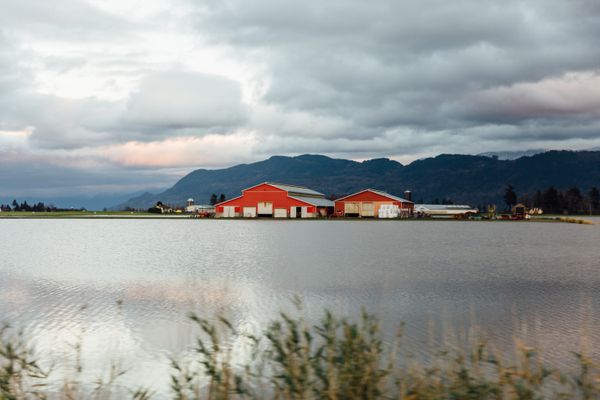 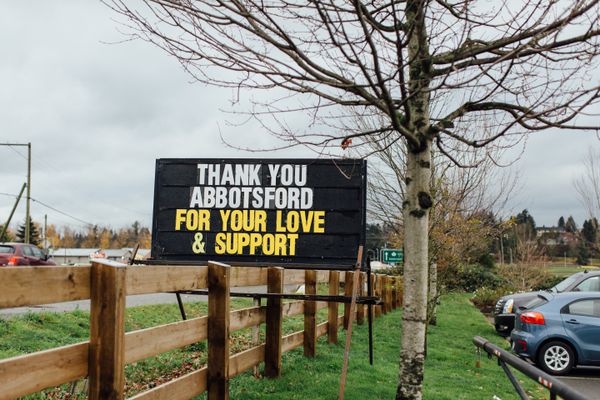 Abbotsford's farms make up the lion's share of B.C.'s egg, poultry and milk production. At the side of a road, a grocery store erected a sign thanking the community for its support.JACKIE DIVES/THE GLOBE AND MAIL
“It’s large and very emotional for producers,” said Abbotsford chicken farmer Ray Nickel of the continuing cleanup efforts. Mr. Nickel is a director on the BC Chicken Marketing Board and has been helping to co-ordinate relief efforts all week.

“The producers will be taking their birds that have died, and either they’re going to be composting in the barn or hauling them off-site – having to deal with that mass mortality.” After those carcasses are removed, the farms will have to be cleaned and disinfected, he said.

He called the process “overwhelming,” but said the experience of mass casualties that came as a result of the heat dome this summer helped to prepare farmers this time around. He said hundreds of thousands of birds died from the heat dome, and he expects the casualties from flooding to be similar.

“Over the next few days, we’re going to have a much better idea on the full impact,” he said.

A spokesperson for the BC Egg Marketing Board said that one of the seven egg farms in the Sumas Prairie was believed to be completely destroyed.

“We suspect that one farm with about 8,000 layers [laying hens] is a total loss,” Amanda Brittain said in a statement. “This means the birds have perished plus the barn and the equipment are damaged beyond repair.” 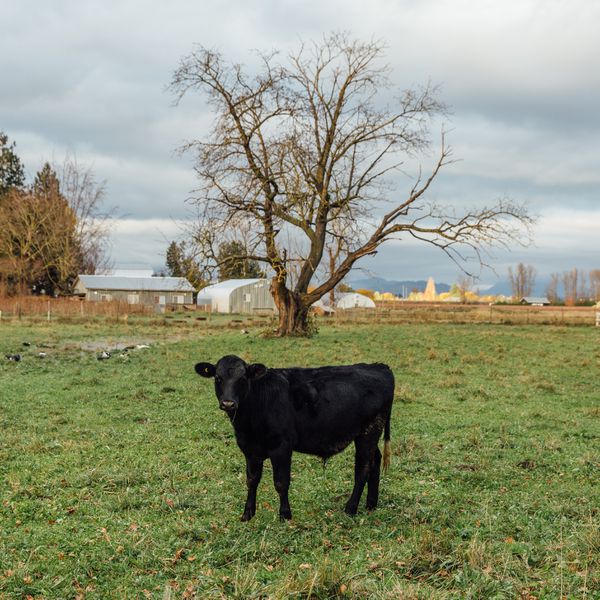 As water recedes, some cattle are safe to graze in the soggy fields.JACKIE DIVES/THE GLOBE AND MAIL
The BC Dairy Association estimates that about 500 of roughly 23,000 cattle in the Fraser Valley died in the floods. About 6,000 were evacuated to other farms, and close to 16,000 remain on their own farms. Some cattle may have to be euthanized as a result of health issues sustained in the flood.

Ms. Popham told the news conference Wednesday of Abbotsford dairy farmers Karl and Rudi Meier, who had 180 cows up to their necks in water.

“Those brothers went in and fed those cows hay for two days while those cows were submerged in that water,” the minister said. “On Wednesday, the waters receded, the cows are fine, they’re back online, and they’re milking those cows.”

BC Pork did not return a request for comment on Wednesday. Ms. Popham said it will be another week or two before officials can access barns to do official counts, but that she believed about 20,000 hogs had died.

Abbotsford Mayor Henry Braun says he has received notes from farmers who are grateful for how the agricultural community has pulled together to support one another.

“But amongst this gratitude is also a deep sadness for the losses faced by friends, family and community members,” he said Monday. “We know the ramifications of the events of this past week will be long-lasting.”

It's been such a hard year for so many during COVID and now this recovery.. which isn't much of a recovery.

when you build in a lake expect it to come back .
Reactions: taxslave and B00Mer

On the BC coal rollers FB site there are stories of people with jet boats trying to help but were forced out by the bureaucraps. Bureaucraps also trying to make farmers get permits to move animals. Don't know how well that went over.
You must log in or register to reply here.
Top Bottom