Why are countries such as France and Germany scared of sending soldiers to warzones? It's countries like these who haven't yet realised that soldiers are SUPPOSED to die for their country, which is one of the things they they agreed to when they put their signature on the contract when they joined the military. But no. They prefer to have armies but not send them anywhere (I get the feeling that France and Germany's armed forces are just extensions of their bloated welfare states. They join just so that they aren't unemployed and get paid a lot to do not very much at all). They just don't seem willing to accept military casualties - which is like not willing to accept yachtsmen to get wet.

But, as per usual, just leave it to the British who know what an army is for and know that there is important work that should be done in Afghanistan.

The British Army will stay in Afghanistan until at least 2009. 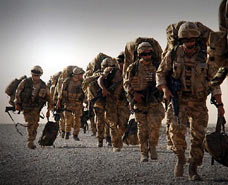 Britain is to send a further 1,400 troops to southern Afghanistan to help quell the continuing insurgency by Taliban militia, Defence Secretary Des Browne has told MPs.

The deployment, to take place over the summer, will bring the UK's forces in Afghanistan to 7,700 and Mr Browne said that the troops were committed to the mission until 2009.

In an oral statement to the House of Commons, Mr Browne made clear that Britain was having to send more servicemen and women to the troubled central Asian state because of the failure of Nato members like France and Germany to provide troops to fight on the frontline.

Mr Browne said the deployment would put extra pressure on the armed forces but was a "manageable" commitment. 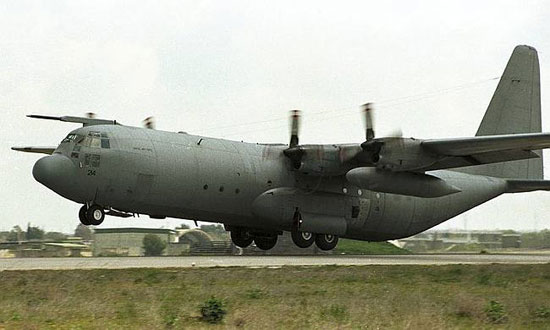 Monster of the skies: Another RAF C-130 Hercules is going to Afghanistan.

He said the UK had decided to fill one of Afghanistan's "most pressing" requirements - a "manoeuvre" battalion for Regional Command (South), an area covering Helmand but also the neighbouring provinces of Kandahar, Oruzgan, Zabol, Nimruz and Daykondi.

"We propose to deploy a battlegroup, comprising elements of an infantry battalion, the 1st Battalion the Royal Welsh (The Royal Welch Fusiliers), which will be augmented with a company of Warrior Infantry fighting vehicles from 1st Battalion Scots Guards."

It will include additional artillery, a brigade surveillance group and a troop of guided multiple launch rocket systems from 39th Regiment Royal Artillery.

Four more Harrier aircraft will be deployed to provide air support, along with four Sea King helicopters and another Hercules C-130.

Some of the forces deployed will be reservists although Mr Browne said he was not able yet to confirm precise numbers.

Leader of the Liberal Democrats, Sir Menzies "Ming" Campbell, has said that the war in Afghanistan is "winnable."


Clashes are expected to increase in the spring and summer with Taliban fighters launching attacks to resist the campaign by the multi-national forces to take greater control of southern Afghanistan.

The extra British forces are being deployed after ministers admitted they had failed to persuade other Nato partners, such as France and Germany, to increase their contributions.

Currently, 5,600 British troops are in Afghanistan and it now appears there will be little easing of pressure on the military, despite Tony Blair's disclosure last week that the force in Iraq was being reduced by 1,600.

Shadow defence secretary Liam Fox is expected to attack ministers for "overstretching" the forces during a Commons debate today, and to urge them to choose between reducing commitments or providing more money.

dailymail.co.uk
Last edited: Feb 26, 2007
You must log in or register to reply here.
Top Bottom