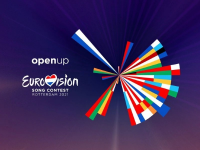 The Eurovision Song Contest returns tonight for the first time since 2019.

There will be no Ireland, Denmark, Romania, Austria and Australia this year as they failed to make it to the final.

The UK's song is "Embers" by James Newman...

Almost time for the annual Saturday night euro cheesy pop fest. I've got some beers in the fridge and some fish in the oven.

Italy are the favourites to win the competition. Here is Italy's entry...

I'm trying to decide whether to vote for Italy or Finland. I might vote for Finland.

Still at the beginning of the voting and I can already see that the UK isn't going to win. We're already 17 points behind tiny San Marino -zero points so far with four other countries.

Switzerland, the first ever winners, last winning it in 1988 with Celine Dion, have an early lead.

Italy, the favourites, are fourth.

Switzerland still have a lead. France, who last won it in 1977, are second. The UK just gave France the maximum 12 points.

The UK is now the only country with no points.

It's looking like it's going to be either Switzerland or France, just five points in it between those top two.

The UK, which last won it in 1997, still the only country with zero points. Even Ireland and Australia gave us nothing and we usually get lots of points from the Irish.

Incredible scenes here. After the jury votes, with the UK the only country on zero points, they've then just received zero points from the public, meaning the UK has a grand total of zero points. There was booing in the crowd and then the UK's James Newman stood up and raised his arms to great cheering and support from the audience and other competitors.

Germany, Spain and hosts Netherlands also have zero points from the public but do have jury points (Germany will finish on 3 points).

Favourites Italy have won the Eurovision Song Contest for the first time since 1990!

In the end it came down to either Italy or Switzerland, with Switzerland needing at least 258 points to win. But they didn't quite get enough...

Were the Italians sniffing drugs? 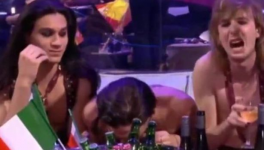 The lead singer of the Italian band who won the Eurovision Song Contest has denied taking drugs, following online speculation over competition footage showing him leaning over a table.

Måneskin's Damiano David rejected the idea that he had been taking cocaine.

"I don't use drugs. Please, guys. Don't say that really, no cocaine," he said at a press conference.

In a statement, Eurovision said the singer would "take a voluntary drug test after arriving home".

Måneskin, who had been favourites to win the contest, took the top prize with their song Zitti e Buoni.

People at home speculated as to what the singer was doing when he appeared to bend his face towards a table as the band celebrated their victory during the live broadcast.

When asked about the incident during a press conference after their victory, Damiano David said he had been looking down because guitarist Thomas Raggi had broken a glass.

Eurovision said the singer would be tested to see if he had taken drugs.

"This was requested by them last night but could not be immediately organised by the EBU," the statement said.

"The band, their management and head of delegation have informed us that no drugs were present in the Green Room and explained that a glass was broken at their table and it was being cleared by the singer. The EBU can confirm broken glass was found after an on site check.

"We are still looking at footage carefully and will update with further information in due course."
The band later also reacted to the allegation in an Instagram story, saying they were shocked and did not condone drug use:

"We really are AGAINST drugs and we never used cocaine. We are ready to get tasted [sic], cause we have nothing to hide." 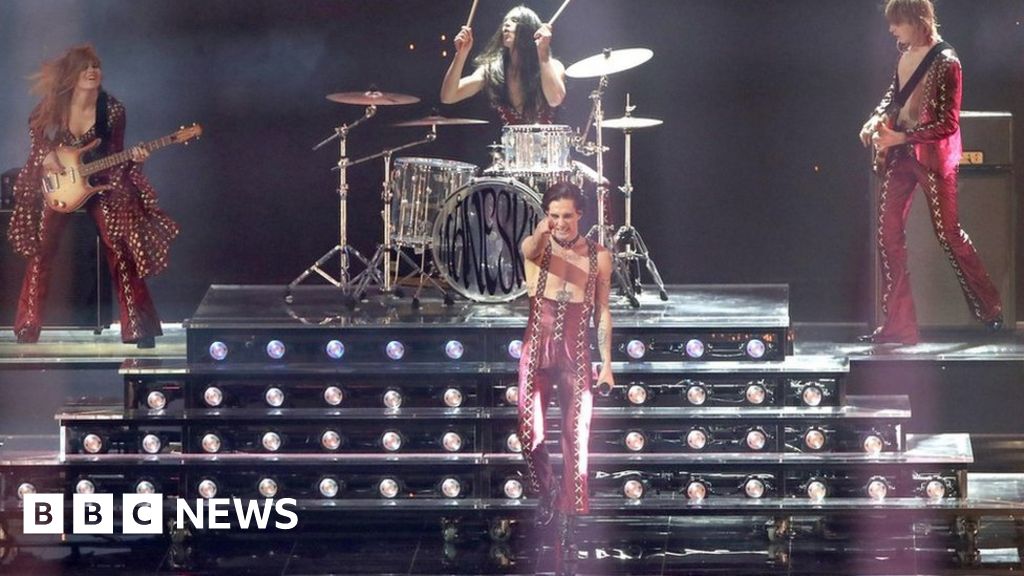 The lead singer of the winning Italian band Måneskin dismisses online speculation about cocaine use.
www.bbc.co.uk 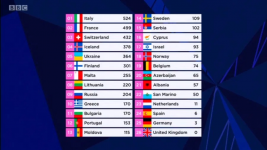 What makes her think she is talking for most Scots?

Why does she think getting "nul points" in Eurovision is down to hating the UK rather than not liking the song?