Euro 2020 kicks off one year late on Friday 11th June. The opening match sees Italy facing Turkey in Rome. There will also be a mouthwatering match between old enemies England and Scotland.

The tournament is being co-hosted by 11 countries, including Azerbaijan, Denmark, England, Germany, Italy, Scotland and Spain.

England are the favourites to win it. 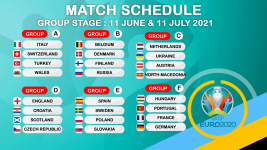 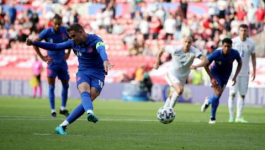 England Vs Romania moments ago. Jordan Henderson about to take a penalty.

The commentator: "Jordan Henderson is one of just seven England outfield players who have played more than 50 games for England to have never scored for England."

Me: "Well he's not going to score this penalty, then."

Henderson takes the corner... and the keeper saves it.

Me and my friend are cheering for Spain. We are watching them since 2008 and we fell in love with this team..

We just hope that this team will have its own `second` life. 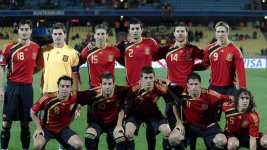 Germany have appeared in the most Euros (12).

Germany and Spain have won the tournament the most times (3 each).

Finland and North Macedonia are making their tournament debuts.

Scotland are appearing for the third time, the other two being in 1992 and 1996. It is the first tournament they have qualified for since the 1998 World Cup.

It is England's ninth appearance.

England, the favourites, have the most valuable squad, the only one worth over a billion pounds.

France's Mbappe is the most valuable player. 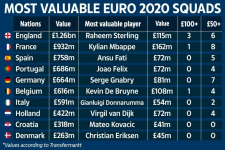 How do they determine who moves on with 6 groups? France is in a tough group with Germany and Portugal.

bob the dog said:
How do they determine who moves on with 6 groups? France is in a tough group with Germany and Portugal.
Click to expand...

The teams in each group play each other once: it's 3 points for a win, 1 point each for a draw, 0 points for a loss. The top two teams in each group, and the four best third-placed teams, then advance to the Last 16, from where it's just a straight knockout all the way to the final. So the Last 16 will consist of eight matches and whoever wins each match then goes through to the Quarter Finals and so on. Any draws in the knockout stages will go to 30 minutes of extra time and if they are still draws after extra time they'll go to penalty shootouts.
Last edited: Jun 11, 2021
Reactions: bob the dog

This house near where I live is all bedecked in English livery tonight for Euro 2020. England start their campaign against Croatia at Wembley on Sunday. 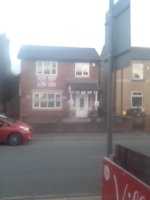 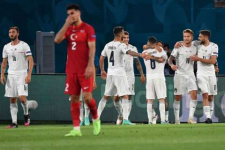 It took a while for Italy to break down Turkey but once they did, the goals flowed and they start Euro 2020 with a dominant win.

Nine wins in a row without conceding for Italy. They are looking impressive!

Italy's 3-0 victory over Turkey is the biggest margin of victory in the opening match at a European Championship tournament.

For a long time it looked like we would be lucky if we got a goal, the three goals coming between the 53rd and 79th minutes.

Denmark VS Finland
Belgium VS Russia

In only his third start in nine matches under interim manager Robert Page, the Cardiff City striker was close to giving Wales an early lead when his header was superbly tipped over by Yann Sommer.

Switzerland took control of the match from that point and, after squandering several chances, they eventually scored as the impressive Breel Embolo headed in from Xherdan Shaqiri's corner.

Wales were slow to improve from their sluggish start but, with 15 minutes left, Joe Morrell's delicately clipped cross found Moore, whose flicked header into the bottom corner sent the small but loud pocket of Wales fans in Baku wild.

Those supporters then thought their hearts had been broken 10 minutes later as Swiss substitute Mario Gravanovic scored just moments after coming on - but his goal was disallowed for offside after a VAR check.

Switzerland kept pressing for a winning goal deep into added time but they were denied by a series of brilliant saves from Danny Ward.

Such was the intensity of the late Swiss pressure, a draw will have felt like a great relief for Wales, whose next game is against Turkey in Baku on Wednesday.

After Turkey were crushed 3-0 by Italy in Friday's tournament opener, Wales' second match in Baku could have a significant bearing on their hopes of reaching the knockout stages.

Both teams are back in Group A action on Wednesday, with Wales staying in Baku to take on Turkey (17:00 BST), while Switzerland travel to Rome to face Italy (20:00). 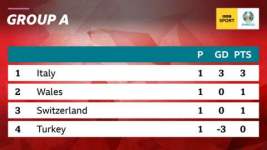 Horrific scenes at Copenhagen - Denmark Vs Finland. A Denmark player has collapsed and has not got back up. They've spent several minutes trying to resuscitate him. The players are being taken off.

Christian Eriksen collapsed as a throw-in was played towards him.

The players immediately called for the medical staff and Eriksen was being resuscitated at one point.

The players all looked in tears and some were praying.

A curtain has been put up around Christian Eriksen now and BBC TV have cut away from the pitch and gone to the studio now where the pundits all seem in shock.

The Danish players all look distraught. They're all standing around Christian Eriksen - looking away - so he can get this treatment in some privacy.

Fans are in tears in the crowd.

Still no news on Eriksen. The fans of both Denmark and Finland are still in the stadium and are in complete shock. Eriksen's wife has been brought onto the pitch and has been consoled by some players, including Denmark's Leicester City goalkeeper Kaspar Schmeichel.

UEFA has announced the Denmark VS Finland game will restart soon and Belgium VS Russia will go ahead just under an hour from now.

The match has just got back underway at the 41st minute mark with it still 0-0. Eriksen has even spoken to his teammates from hospital.

Finland, playing in their first major tournament, have a surprising 1-0 lead over Denmark.

Belgium already have a 1-0 lead over Russia after 10 minutes in the same group in St Petersburg. It's the first goal in the first half of a match in the tournament. 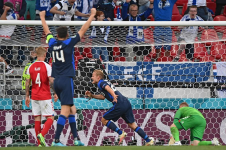 Finland won their first game at a major finals as they beat Denmark in a Euro 2020 match that was overshadowed by Danish midfielder Christian Eriksen collapsing on the pitch.

Eriksen, 29, collapsed after 41 minutes and received CPR on the pitch as his visibly-distressed team-mates surrounded him and fans around the world watched in shock.

After approximately 15 minutes of treatment, the Inter Milan star was carried off on a stretcher.

Supporters from both countries chanted his name while both sets of teams spent the next hour in their dressing rooms.

Only when informed that he was awake in hospital did the players agree to resume the match.

At 19:05 BST, two hours five minutes after kick-off, Denmark goalkeeper Kasper Schmeichel returned to the pitch, before the Finland players applauded all the Danish squad members and the spectators in Copenhagen gave all the players a standing ovation.

The match resumed at 19:30 BST with the final four minutes of the first half played before a five-minute break for half time and then the second half.

Before Eriksen's worrying collapse, Denmark had been the better team, with Finland goalkeeper Lukas Hradecky saving Jonas Wind's 20-yard effort and tipping a header from Tottenham midfielder Pierre-Emile Hojbjerg over the bar.

The match, the third of the delayed Euro 2020, had begun in a raucous, passionate atmosphere with more than 15,000 people at the Parken Stadium in the Danish capital. But, unsurprisingly, it was far more subdued on the restart as attention focused on Eriksen's health. 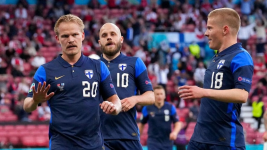 The visitors, who have never qualified for a World Cup and were playing in their first European Championship finals game, took the lead when Schmeichel was unable to keep out Joel Pohjanpalo's header following Jere Uronen's cross.

Denmark had a chance to equalise when they were given a penalty after Paulus Arajuuri was judged to have fouled Yussef Poulsen, but Hojbjerg's poor spot-kick was saved by Hradecky.


https://www.bbc.co.uk/sport/football/51197533
You must log in or register to reply here.
Top Bottom