Cuba loves their socialism so much they are mass protesting in support, huh? They are against it?

Thousands of Cubans took part in rare protests Sunday against the communist government, chanting, "Down with the dictatorship," as President Miguel Diaz-Canel called on his supporters to confront the demonstrators.

The anti-government rallies started spontaneously in several cities as the country endures its worst economic crisis in 30 years, with chronic shortages of electricity and food.

Several hundred protesters marched through the capital Havana chanting, "We want liberty," with a heavy military and police presence deployed after demonstrators massed outside the Capitol building.

Diaz-Canel delivered a combative television address, saying: "The order to fight has been given — into the street, revolutionaries!"

"We call on all revolutionaries of the country, all communists, to go out in the streets where these provocations occur... and to face them in a decisive, firm and courageous way."

The only authorized gatherings in Cuba are normally Communist Party events, but according to the data journalism site Inventario, a total of 40 demonstrations took place on Sunday.

Social media showed scenes from anti-government protests around the country, but mobile internet — only introduced in Cuba since 2018 — was largely cut off on Sunday afternoon.

One local, on condition of anonymity, told AFP that she participated in the demonstration as she was exasperated by "the situation with electricity and food."

Security forces arrived soon after the protests began, and the president later visited the town himself, surrounded by party activists as residents heckled him, according to videos posted online.

"The energy situation seems to have produced some reaction," Diaz-Canel told reporters, blaming US sanctions imposed by Donald Trump and left unchanged by President Joe Biden.

He accused "a Cuban-American mafia" of whipping up the protests on social media.

Candido Abrines, a retired pro-government protester, told AFP he was demonstrating so that "capitalism will never come back here again and (so) that these mercenaries paid by the Empire (the US) will never again take our streets, first they have to kill us all."

The United States reacted swiftly to the day's events.

"The US supports freedom of expression and assembly across Cuba, and would strongly condemn any violence or targeting of peaceful protesters who are exercising their universal rights," US National Security Advisor Jake Sullivan wrote on Twitter.

In Miami, thousands of Cubans and Cuban-Americans took to the streets of the city's Little Havana district in support of the protests, on foot or waving Cuban flags out of car windows.

"These young people today have finally said 'Enough is enough and we’re going to do what our old folks couldn’t do'," Cuban-American Yanelis Sales told AFP.

"Cubans, we are here with you from the United States."

Diaz-Canel has been president since 2018, succeeding Raul Castro, who served as leader after his brother Fidel Castro.
Public anger in Cuba has grown recently, driven by long food lines, worsening power shortages for several hours a day and a critical shortage of medicines since the start of the Covid-19 crisis, with Cuba under US sanctions.

The country is also experiencing its toughest phase yet of the coronavirus pandemic, and on Sunday reported a new daily record of infections and deaths.

The country of 11.2 million people was left relatively unscathed in the first months of the Covid-19 outbreak but has seen a recent hike in infections.

"These are alarming numbers which are increasing daily," said Francisco Duran, head of epidemiology in the health ministry.

Under hashtags such as #SOSCuba, calls for assistance have multiplied on social media, with citizens and music stars alike urging the government to make it possible for much-needed foreign donations to enter the country.

An opposition group called Saturday for the creation of a "humanitarian corridor," an initiative the government rejected by saying Cuba was not a conflict zone.

Ernesto Soberon, a foreign affairs official, denounced a "campaign" he said sought to "portray an image of total chaos in the country which does not correspond to the situation."
Reactions: taxslave

So even communists don't want communism. Where is harpercons to go?
Reactions: EagleSmack and Twin_Moose

Well it's Trump's fault of course

The first mass anti-government protests in decades in Cuba were partially triggered by energy shortages amid a tighter blockade imposed by former U.S. President Donald Trump, according to the island’s communist leadership.

The discontent is due to “economic asphyxiation” as energy shortfalls force the government to slow economic output and resort to blackouts, President Miguel Diaz-Canel said Monday, at a press conference. He also blamed surging COVID-19 on the island and “Miami’s conservative Cuban-American mafia” for fueling the unrest......More

Is Joe going to get in trouble with his Socialist Democrats with this statement?

Biden: US Stands With Cuban People in Call for Freedom​

The United States stands with the people of Cuba in their call for freedom and relief from the coronavirus pandemic and decades of repression, President Joe Biden said Monday.

Thousands of Cubans joined street protests from Havana to Santiago on Sunday in the biggest anti-government demonstrations on the Communist-run island in decades. They chanted "freedom" and called for President Miguel Diaz-Canel to step down.

"We stand with the Cuban people and their clarion call for freedom and relief from the tragic grip of the pandemic and from the decades of repression and economic suffering to which they have been subjected by Cuba's authoritarian regime," Biden said in a statement.......More
Reactions: petros

"decades of repression and economic suffering to which they have been subjected by Cuba's authoritarian regime," Biden said 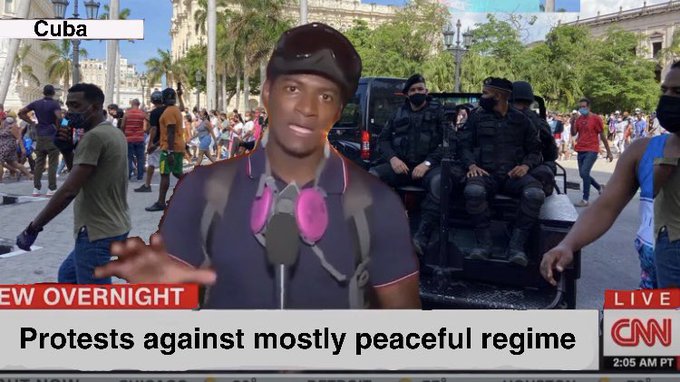 loads of Cubans will flee to the USA and Biden will welcome them all too
Reactions: Twin_Moose and petros

B00Mer said:
LOL They are invading the USA from Mexico and Latin America… next boat 🛥

loads of Cubans will flee to the USA and Biden will welcome them all too
Click to expand...

Nailed Psaki admits the PR team puts out his statements

At the White House press briefing Monday, a CNN reporter blamed Trump for the anti-communism protests in Cuba, instead of the island's communist regime.
Reactions: petros

Trump: I Stand With the Cuban People​

Backing the protesters calling for liberation from communism in Cuba, former President Donald Trump issued a reminder of the Biden administration's reversing his Cuban policies and calling on President Joe Biden to stand up against communism.

"I stand with the Cuban people 100% in their fight for freedom," Trump wrote in a statement from his Save America PAC on Monday afternoon. "The government must let them speak and be free!

"Joe Biden MUST stand up to the communist regime or — history will remember. The Cuban people deserve freedom and human rights! THEY ARE NOT AFRAID!".....More
Reactions: petros

The America First Policy Institute on Monday joined the growing number of groups and individuals backing the Cuban people protesting the communist government there, saying "we share a common dream" of protecting basic liberties.

"The America First Policy Institute supports the people of Cuba in their fight for freedom," said retired Lt. Gen. Keith Kellogg, co-chairman of the Institute's Center for American Security, in a statement released to the press.

"They understand like few others today how fragile freedom is and how vital it is for the prosperity and advancement of humanity," Kellogg said. "Their fight is our fight, and we share a common dream of protecting basic liberties for our children and future generations, whether from discredited ideologies like Socialism and Communism or from new forces like Big Tech and their efforts to suppress dissent.".....More
Reactions: taxslave and petros