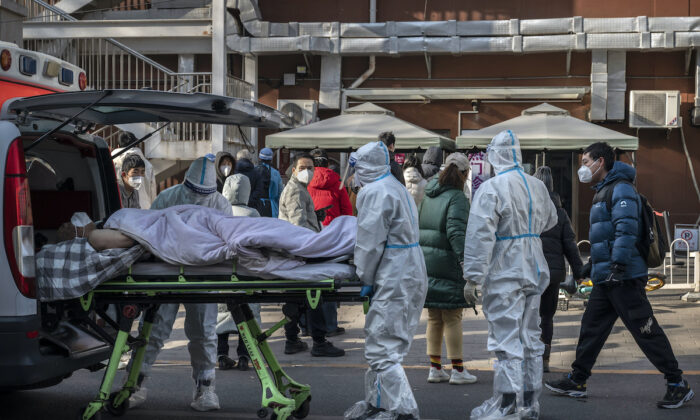 Medical workers arrive with a patient on a stretcher at a fever clinic in Beijing on Dec. 9, 2022. (Kevin Frayer/Getty Images)

When communist China unleashed the COVID-19 virus on the rest of the world in the winter of 2020, it knew what it was doing. Wuhan, a major industrial city of 11 million people and the capital of Hubei Province, was ground zero for the pandemic. In a level-four laboratory used by the communist Chinese military to develop bioweapons and pursue gain-of-function research, a new virus was released—likely by accident—and opened a Pandora’s Box.

By mid-January 2020, the city was overwhelmed with people who were sick and dying from the virus, and the crematoria were running 24/7. China reported only 3,299 coronavirus-related deaths, with most taking place in Wuhan, the epicenter of the global pandemic. But one crematorium in Wuhan alone received two shipments of 5,000 urns over the course of two days, and overall, the massive number of orders for burial urns ran into the tens of thousands. The government’s reported numbers of deaths were ridiculously low.

From Jan. 3, 2020, to Jan. 11, 2023, China reported to the World Health Organization (WHO) that there had been 10,803,226 confirmed cases of COVID-19, with 33,343 deaths. Yet by mid-January 2023, estimates from multiple cities throughout China suggest that they are experiencing as many as 10,000 COVID-19 deaths daily—per city. An internal estimate was leaked from the government that 250 million people in China may have caught COVID-19 in the first 20 days of December alone. Another leak reported that on Dec. 21, 37 million people were newly infected with COVID-19 across China on that day alone. Compare that to the official number of 3,049 new infections that the Chinese Communist Party (CCP) reported for that day. Another report suggested that more than 75 percent of the population is already infected.

This new epidemic in China raises all the old questions again. Only this time, WHO and governments, now facing the possibility of a new pandemic, are demanding more openness from China. Finally, on Jan. 14, 2023, Chinese officials responded to accusations of lack of transparency. They reported that 60,000 people had died from COVID-19 in just over a month. That still doesn’t match the numbers they have been sharing in private meetings, but it is undoubtedly closer to the truth. 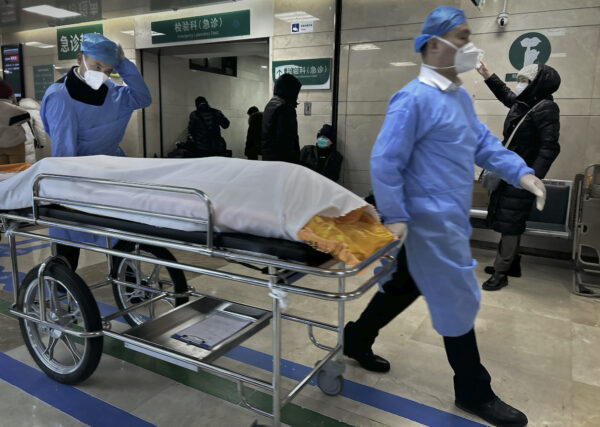 Hospital workers wheel a body on a gurney in the busy emergency room at a hospital in Beijing on Jan. 2, 2023. (Getty Images)

Learning From Experience, or Not


At the end of January 2020, months after the first infections in Wuhan had brought the city to its knees and just before the Lunar New Year (a long holiday for Chinese citizens, who normally use the time to travel), the CCP intentionally allowed 5 million residents of Wuhan to travel before locking down the entire city, cutting off all roads, trains, and planes in and out of Wuhan. Five million people, many of whom were carrying the virus, were allowed to leave Wuhan and travel internationally to expose the rest of the world to COVID-19, while at home, the CCP confined the remaining residents of Hubei Province to their homes.

This was a crime against humanity that has never been addressed. Chairman Xi Jinping unleashed a deadly virus that could kill millions of people. And that is exactly what happened. The virus spread like wildfire, racing around the globe to virtually every country. An incomplete number provided by the WHO for the COVID-19 deaths during the first round of the pandemic (2020–2021) exceeded 3 million. Still, as of Jan. 15, 2023, estimates of total COVID-related deaths (except in China, whose official numbers have been highly suspect from the beginning) exceeded 6,731,000 people.

It could have been a lot worse, but it was bad enough. The Spanish Flu of 1918, caused by an H1N1 virus, is thought to have killed between 50 million and 100 million people worldwide. This was during the First World War, and it was the war itself and the massive transfer of troops from country to country that accounted for the high number of deaths from this pandemic. By contrast, an analysis by WHO suggests that COVID–related deaths worldwide have been between 16 million and 28.2 million. This number is only an estimate because China, with its population of 1.4 billion, has been massively undercounting its COVID-19 casualties.


The shutdown of Wuhan in January 2020 was the beginning of the zero-COVID policy that kept people locked in their homes for months on end, if even one case of COVID-19 appeared in cities of millions. One case could trigger widespread food shortages, medicine, and other essentials. The people were subjected to repeated testing, and homes were commandeered for some, while the residents were forcibly sent to quarantine centers that housed hundreds.

This ended abruptly in December 2022, when a raging apartment fire in the city of Urumqi in China’s Xinjiang region triggered demonstrations in major cities throughout China. That fire killed 10 people, including a three-year-old child. It took firefighters three hours to put the fire out because the government blockade of the building prevented them from getting close to the flames.

The news of the fire spread rapidly, and within hours, the demonstrators were in the streets, demanding the end of the lockdowns and calling for the CCP and Xi Jinping to step down. The demonstrations were unprecedented in a country that had been locked down by a tyrannical government for two years. It worked, but the cure was as bad as the disease.

Within days, the CCP lifted the lockdown completely, and the people were once again free to leave their homes and go about their lives. But because of the lockdowns, a majority of the population had not been exposed to the virus, and new variants struck the Chinese people with a vengeance. The predominant strains of the Omicron variant that are now ravaging the population, BA.5.2 and BF.7, now represent 97.5 percent of the infected population. But unlike the variant now spreading in the United States, this one is deadly to people with no prior exposure or immunity. 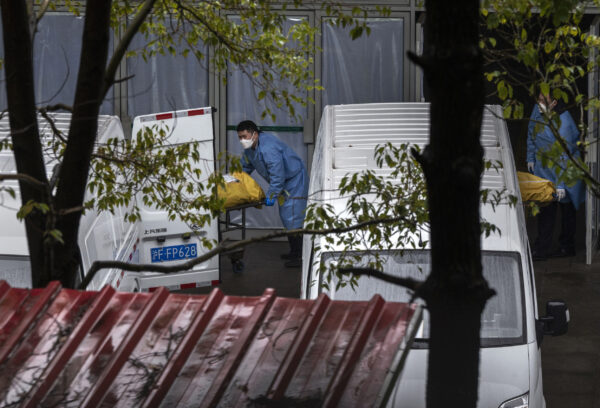 Funeral workers load bodies into vans to be taken for cremation at a busy local funeral home in Shanghai, China, on Jan. 13, 2023. (Kevin Frayer/Getty Images)

As expected, the Chinese authorities claimed that daily COVID-19 deaths were in single digits, but reports coming out of China told a different story. Satellite pictures have captured images of the long lines of hearses in every city, and crematoria have reported being overwhelmed by the flood of incoming dead bodies. Sick patients crowd hospital hallways where bodies line the walls, and there seems to be no end to the dying.

[Part 2]
Needless to say, as the virus continues to spiral out of control, China is in a critical situation and is still trying to figure out what to do about it. Xi has been uncharacteristically quiet on the subject, but his policies continue to be Machiavellian. His zero-COVID policy, which he was so proud and so adamant about keeping in place only a month ago, is now in shambles. The street demonstrations that called for his removal must have been a humiliation in a country where saving face is paramount. But this is far from the end of Xi. He still has enormous power, and senior members of his party are rallying around him. But his policies spell great danger to the rest of the world.
China has now reopened to foreign tourists, and travelers can enter the country without quarantine. All they need is a negative PCR result within 48 hours before departure. China also restarted its visa-free policy, which means one can travel to China without applying for a new visa. In other words, China is not only making it easy for the Chinese to travel abroad, but it is also encouraging foreign travelers to come to China.
Even more chilling is the news that after releasing the Chinese people from the long COVID-19 lockdowns, Xi also opened up the Chinese ports for international travel at precisely the same time as he did in 2020. The Chinese New Year falls on Jan. 22 this year, and celebrations culminate with the Lantern Festival on Feb. 5. China is reopening its ports and has begun reissuing passports. This is exactly the same time that 5 million people from Wuhan left the city in 2020 to travel internationally. And once again, they are carrying a dangerous virus.
Xi has learned nothing from recent history. But one question remains: Will the cruelty that Xi continues to inflict on the world turn back on him and destroy the very power structure that he has worked so hard to build? Will his massive mistakes come back to haunt him and bring down his dream of world supremacy? Or will the power infrastructure he created protect him and allow him to destroy the world?
The CCP is about to unleash another pandemic on the world, and this one may be far more lethal than the last. Closing national borders to all Chinese travelers and preventing our own from traveling to China would seem to be only common sense. It must be done—immediately. But the world seems uncommonly devoid of anything approaching such basic wisdom. If so, it’s time to prepare for another storm.
Ilana Freedman is an intelligence analyst with more than thirty years in the field. Ilana has authored hundreds of articles on global threats and the geopolitical landscape. She has written four books on Islamic terrorism, and is currently working on a comprehensive volume on the rise and fall of China.
E

Audio
You must log in or register to reply here.
Top Bottom