Two brothers have today revealed their reconstruction of the largest Roman mosaic ever found in Britain. And, like Dr Johnson's Dictionary, it took ten years.

The original mosaic, which depicts the ancient Greek music master Orpheus, was made in 325 AD - late in the era of Roman Britain - and was first fully excavated in 1793 at Woodchester, Gloucestershire.

Bob and John Woodward used 1.6million tiny pieces to produce their copy of the Orpheus pavement.

Now the 47ft square pavement is being auctioned and it is expected to fetch £25,000. 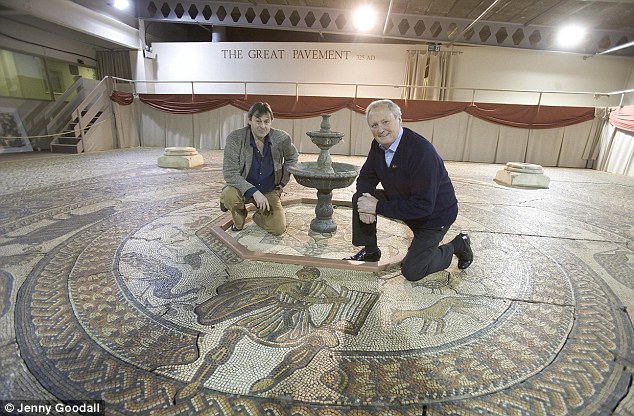 Painstaking: Bob Woodward (right) and his brother John with their replica of the Great Orpheus Pavement​

The mosaic depicts the the ancient Greek music master Orpheus with his lyre resting on his left knee, his hunting dog alongside him and a myriad of beasts all around him.

The animals include a tiger, leopard, lion, elephant, bear, gryphon, stag, horse, wild boar and birds such as pheasants, peacocks and doves.

A pair of water nymphs are depicted in each spandrel.

The work is currently on display at Prinknash Abbey, near Stroud, Gloucestershire, but the lease has come to an end and its owner - who does not wish to be identified - has decided to sell.

Iona Sale, who is publicising the event for auctioneers Chorley's, said it had been challenging putting an estimated sale price on the mosaic - because no-one had ever attempted such a feat before. 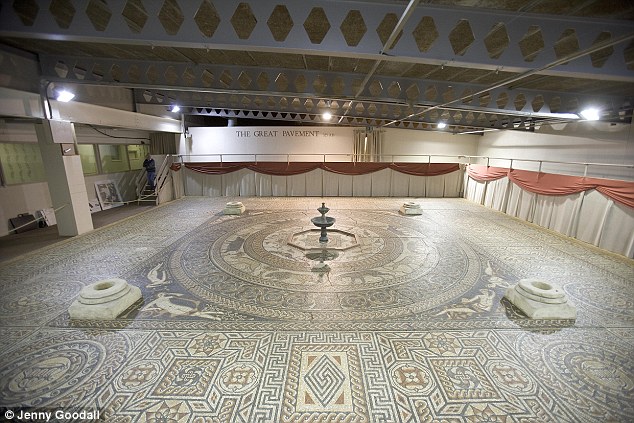 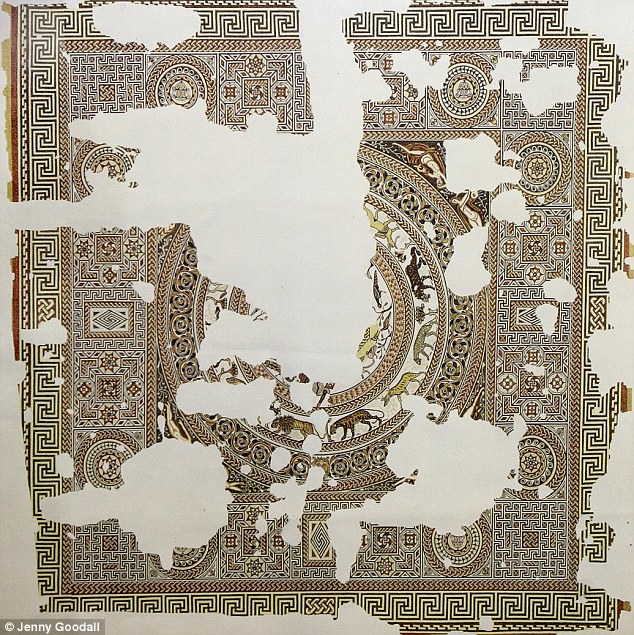 Inspiration: The original pavement at its last public viewing in 1973 when the brothers vowed to copy it​

She said: ‘We have had a lot of interest in the mosaic already.


But it's so hard to determine what it will sell for because it's such a one-off.’

How fitting it is that two brothers have reconstructed the Orpheus pavement, Britain's largest Roman mosaic. When it was made, in 325AD, two brothers ruled the Roman Empire, including Britain: Emperor Valentinian I and Emperor Valens.

The original mosaic, which dates back to 325 AD, was first fully excavated in 1793 at Woodchester, Gloucestershire.

Although it is missing many pieces, it still shows a full picture.

It has only occasionally been exposed since then before being re-covered with earth.

During its most recent uncovering in 1973, when the brothers first fell in love with it, more than 150,000 visitors caused chaos when they descended on the village. 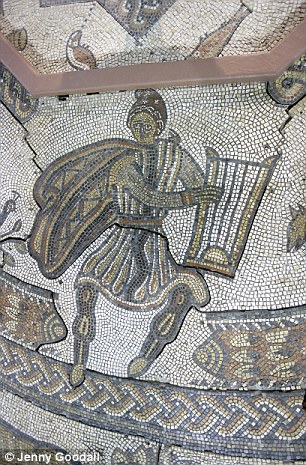 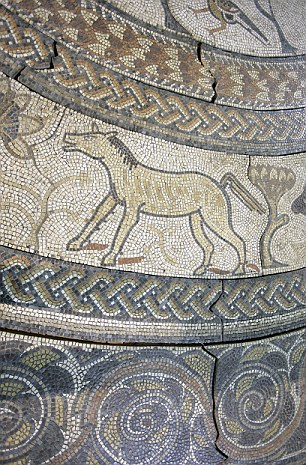 Detail: Ancient Greek musician Orpheus, playing a lyre (left), and a horse - one of many animals - on the mosaic

Realising that another display might never take place they decided to make a full-scale reconstruction.

The replica they created is now recognised as one of the most significant archaeological projects of recent times.

The Roman villa at Woodchester, near Stroud, is thought to have belonged to someone of huge wealth and influence.

Of its 60 rooms, 20 had mosaic floors including the large hall which contained the Orpheus pavement featuring one of the most important figures in Greek mythology.

Sometimes called the father of music and poetry, Orpheus was presented with his lyre by the god Apollo. 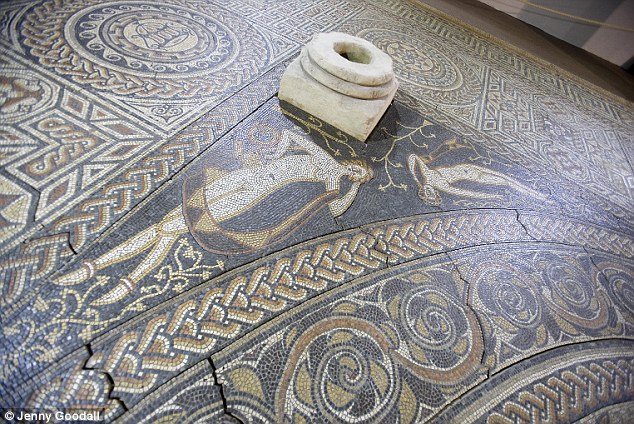 Labour of love: Two nymphs around the edge of a circle on the mosaic at Prinknash Abbey, near Stroud​

He was also one of the few mythological figures to enter the underworld and return.

Bob Woodward turned from builder into research scholar as he tried to discover what the missing parts must have looked like.

The earliest report he found dated back to 1693, when Celtic scholar Edward Llwyd recorded having seen ‘birds and beasts on the floor’.

He conducted careful research into other Orpheus mosaics to help replace the missing sections as accurately as possible, particularly the Barton Farm mosaic at Cirencester which had several similar beasts.

A replica in the original limestone would have been too heavy and expensive so instead the Woodwards scoured the country to find clays with suitable natural colours.

The work will be sold at Chorley's in Gloucestershire on June 24.

In the bush near Sudbury

That would look so cool around my tub....
A

I wonder if they are too busy to do our deck.

Do they do house visits?
You must log in or register to reply here.
Top Bottom