Bill Gates and Melinda Gates to end 'their marriage'

Microsoft probed Bill Gates’s romantic involvement with employee
"There was an affair almost 20 years ago which ended amicably," his spokesperson said

The board reviewed the matter and held a “thorough investigation” with the help of an external law firm, the software giant said. It didn’t reach a conclusion to the probe because Gates had stepped down before it was completed, Microsoft said.


“Microsoft received a concern in the latter half of 2019 that Bill Gates sought to initiate an intimate relationship with a company employee in the year 2000,” Microsoft said in a statement. “A committee of the Board reviewed the concern, aided by an outside law firm, to conduct a thorough investigation. Throughout the investigation, Microsoft provided extensive support to the employee who raised the concern.”

Dow Jones earlier reported that Microsoft’s directors found Gates’ involvement with the female employee to be inappropriate and decided last year that he had to step down from the board, citing people familiar with the matter who weren’t identified.

This advertisement has not loaded yet, but your article continues below.
Article content
Microsoft didn’t provide further details on the investigation.

The billionaire said in March last year that he was stepping down from the board to devote more time to philanthropy. Gates hasn’t been active in a day-to-day role since 2008, Microsoft said at that time. Gates co-founded the software company in 1975 and served as its CEO until 2000, the same year his foundation was started, and was chairman until February 2014.

A spokeswoman for Gates said his decision to leave the board has nothing to do with the romantic involvement with an employee.

“There was an affair almost 20 years ago which ended amicably,” she said, adding that his “decision to transition off the board was in no way related to this matter.”


The belated investigation into the affair came at a time that was marked by a groundswell of discussion at Microsoft about the treatment of women and Me-Too conversations in the broader industry. Since 2000, Microsoft had also put in place processes for investigating allegations and overhauled them with the goal of making them stronger, the company said.

Intel Corp. Chief Executive Officer Brian Krzanich resigned after the board was informed that he had had a consensual relationship with a subordinate, even though that relationship had ended years before and predated his appointment to the top job at the company. The board conducted investigations internally and via external counsel to confirm the violation of the company’s policies and made the announcement June 2018.

This advertisement has not loaded yet, but your article continues below.
Article content
Gates and Melinda French Gates announced their divorce earlier this month after 27 years of marriage. Several reports, including those that emerged over the weekend, said she had raised concerns over his dealings with convicted sex offender Jeffrey Epstein.

The New York Times had reported in 2019 that Gates had met with Epstein several times, and once stayed late at his New York townhouse. Epstein had died in jail two months prior while awaiting trial on federal charges related to sex trafficking.

Gates’s spokeswoman denied the reports. The “characterization of his meetings with Epstein and others about philanthropy is inaccurate,” she said. “The rumours and speculation surrounding Gates’ divorce are becoming increasingly absurd.”

While Gates’ dealings with Epstein weren’t a part of the scope of the Microsoft investigation, it was discussed by some board members, according to a person familiar with the matter, who asked not to be identified because the information isn’t public.

The Bill and Melinda Gates Foundation is the largest of its kind on the planet. With more than 1,600 employees and offices around the world, it has already distributed more than $50 billion since its inception to causes like vaccine development and women’s empowerment.

Last week, Cascade Investment, the investment company created by Gates, transferred stock in Deere & Co. to his wife, bringing the total amount she’s received since they announced their divorce to more than $3 billion.

The investment vehicle transferred about 2.25 million shares worth about $851 million, according to a regulatory filing. That followed similar disclosures tied to Mexican companies Coca-Cola Femsa and Grupo Televisa and about $1.8 billion of stock in Canadian National Railway Co. and AutoNation Inc.

"There was an affair almost 20 years ago which ended amicably," his spokesperson said

According to the Daily Beast, Gates wanted to end his “toxic” marriage to wife Melinda. So, he turned to sexual predator Epstein during meetings the two men had at the hedge funder’s Manhattan townhouse.


Two separate sources told the online news outlet that Gates met Epstein dozens of times from 2011 to 2014. One person in attendance told the Daily Beast the meetings were an escape for the tech titan.

And this was after Epstein had been convicted in Florida for soliciting an underage girl for prostitution.

The source added that Gates tried to encourage Epstein to get involved with the Bill and Melinda Gates Foundation. A Gates spokesperson denied the allegations.

This advertisement has not loaded yet, but your article continues below.
Article content
“Bill never received or solicited personal advice of any kind from Epstein — on marriage or anything else. Bill never complained about Melinda or his marriage to Epstein,” the spokesperson said.

“Your characterization of his meetings with Epstein and others about philanthropy is inaccurate, including who participated.”

Epstein died in a New York jail cell in 2019 while awaiting trial on a slew of sex-trafficking charges. His alleged “pimp,” socialite Ghislaine Maxwell, goes on trial in November.

She has denied any wrongdoing and has pleaded not guilty.

Bill and Melinda Gates announced earlier this month they were ending their 27-year marriage. In her divorce petition, Melinda claimed the marriage was “irretrievably broken.”

Earlier reports suggested that Melinda was deeply disturbed by her husband’s connection to Epstein and it may have been the straw that broke the camel’s back.


Since the announcement, Bill Gates nerdy persona has been pummelled with reports of naked pool parties and infidelity.

The Wall Street Journal reported that Gates had a long-term affair with a Microsoft employee.

According to the Journal, the board became aware in 2019 that the employee had written a letter claiming she had a long-term sexual relationship with Gates.

In her letter, the employee wanted changes to her job and demanded that Melinda read the letter. It isn’t clear what the fallout was.

He resigned before an internal probe was completed.

A spokeswoman for Gates admitted: “There was an affair almost 20 years ago which ended amicably.” 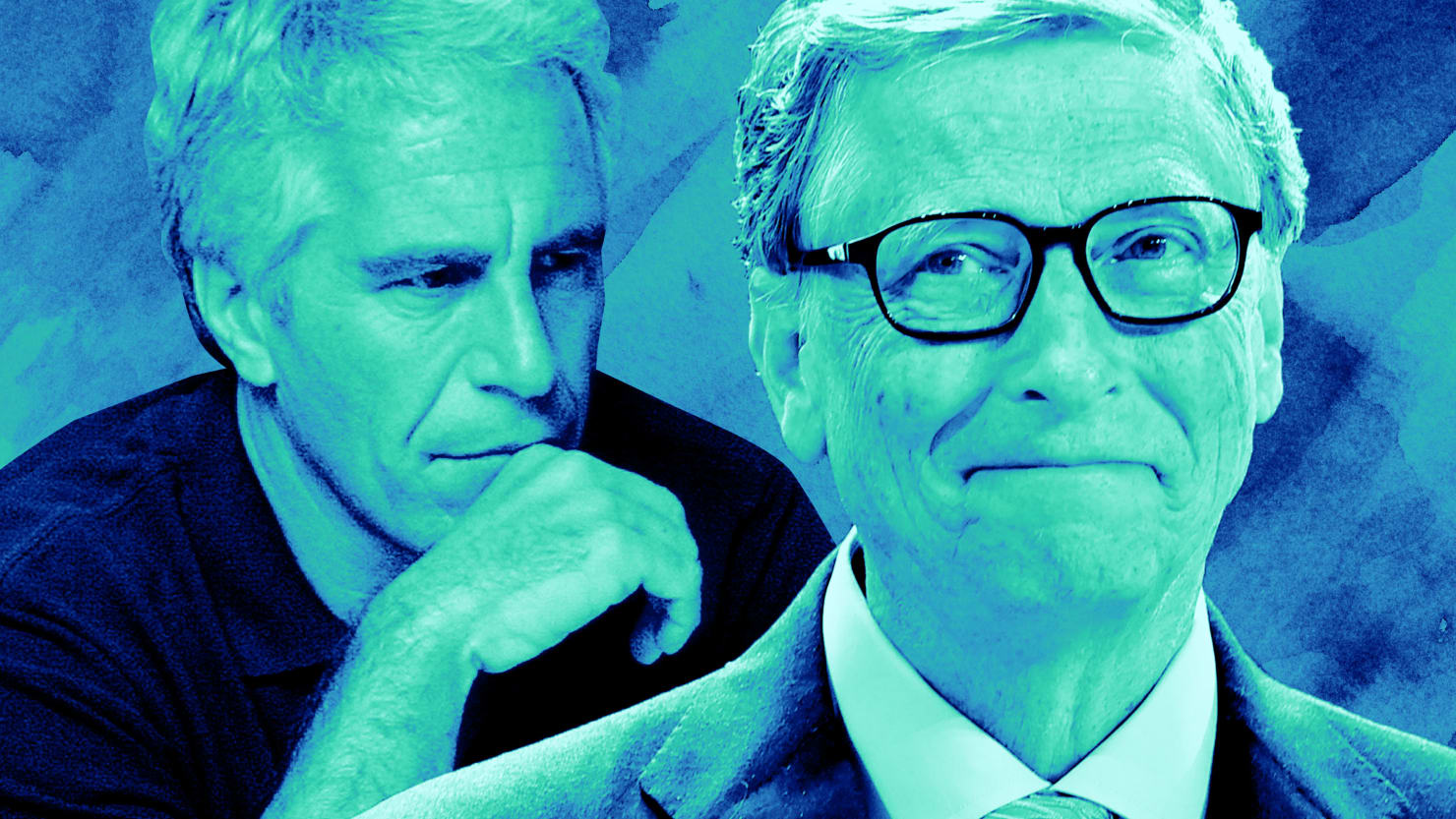 A Gates spokesperson denied the allegations

Anyone think Melinda Gates suddenly became hotter now that she is divorced from Billy.
Reactions: taxme, taxslave and Danbones

The richer divorcees are, the hotter they are.
Reactions: B00Mer

Melinda filed for divorce from the Microsoft co-founder in May 2021, just a few months after it was announced the two were separating.


The reason behind the split was reportedly Bill’s friendship with Jeffrey Epstein, who took his own life ahead of standing trial for sex trafficking charges, which first came to light in 2017.

According to TMZ, the software mogul is worth about $130 billion, which could net over $65 billion for his now ex-wife in the divorce settlement.

The Gates married in 1994 and share children Jennifer, Rory, and Phoebe.

Bill Gates and his former wife Melinda have finalized their divorce.

taxslave said:
The richer divorcees are, the hotter they are.
Click to expand...

I would marry her just for her money. But I would probably have to try and force myself to be able to have an erection to have sex with her after already knowing that she has had sex with Billy Bob Gates globalist dink inside her. Maybe I should just forget about the money. LOL.

Article content
The 65-year-old software developer split from Melinda Gates in May after 27 years of marriage and their divorce was finalized earlier this week.


Although he admitted the end of their relationship is a “source of great personal sadness,” Gates still had a lot of praise for his ex-wife and is happy to keep working with her on their non-profit Bill & Melinda Gates Foundation.

“It’s definitely a very sad milestone,” he told Anderson Cooper on CNN. “Melinda’s a great person and that partnership we had coming to an end is a source of great personal sadness.

“We are communicating and working on the (Bill & Melinda Gates) Foundation, so that partnership we’re going to try and continue.

“Melinda has incredible strengths that she brings that help the foundation be better. We always enjoyed our work together. That would definitely be the best thing for the foundation.”

“It’s a time of reflection, and at this point, I need to go forward,” he said. “Within the family, we’ll heal the best that we can.”

The Microsoft co-founder was also quizzed on his social connection with convicted sex offender Jeffrey Epstein, who died in 2019, and admitted it was a “mistake” to spend time with him.


He said: “I had several dinners with him, you know, hoping that what he said about getting billions of philanthropy for global health through contacts that he had might emerge.

“When it looked like that wasn’t a real thing, that relationship ended.

“But it was a huge mistake to spend time with him, to give him the credibility of being there. There were lots of others in that same situation but I made a mistake.”

That all depends on what the money is being offered for.
You must log in or register to reply here.
Top Bottom