Biden hires lawyer to keep him out of jail 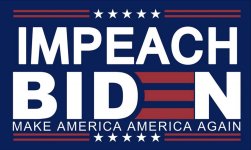 WHy wait? DO it now.

taxslave said:
WHy wait? DO it now.
Click to expand...

After November elections.. wipe the floor with him
Reactions: Dixie Cup

B00Mer said:
After November elections.. wipe the floor with him
Click to expand...

By then even his disciples should be ready to dump him. Except flossy. He will still be looking for a dumb ass to stick his nose up.
Reactions: DaSleeper and Dixie Cup

taxslave said:
WHy wait? DO it now.
Click to expand...

Despite everything, he needs to be impeached b'cuz he's going against the laws of the U.S. - something they accused Trump of doing even before he was elected as President. I do hope they go after Clinton as well. But I'm still really worried that the Dems will cheat enough to win in November - I pray that doesn't happen but I'm not convinced that it will be a fair vote.
Reactions: taxslave

Meh…I watched the OP Video expecting to hear that Biden was dipping his cigar in Lewinsky (?) or that he pressured Zelensky to investigate Joe Biden (?) or something impeachable from recent memory, but this isn’t that.
Reactions: petros