Yesterday, just a week after the 60th anniversary celebrations of the People's Republic, China kicked off its first World Media Summit. It shows how far China has come—and how far it has to go.
First, understand the problem. We all know China is a nation of 1.3 billion people, but that is just a statistic. Think of how we regard the United States—how different California is from Ohio, for example. Then quadruple it. Think of trying to meld China's 56 native ethnic groupings into one cohesive state. Think of the disaster, not just to the Chinese, but to ourselves, if it fractured.
Understand also how dramatic and daunting the challenge of China's development is. The U.S. has 4% of its population employed in agriculture. Almost 60% of Chinese make their livelihood farming, and more than 150 million live on $1 a day. They need to shift from farming to industry, and they need to do so desperately. The East Coast of China, especially around Beijing, Shanghai and Guangzhou, may look, in parts, like the First World. But rural China, inland and to the West, is in the beginning stages of development. It will have to change at a pace the world has never seen before.
View Full Image 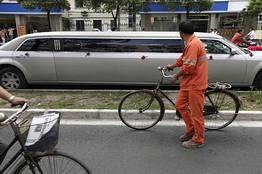 Are China's leaders concerned about ensuring that this happens with minimum chaos and maximum stability? Of course, and so they should be. Disorder is their enemy and ours.
Today, we analyze feverishly whether China will be able to help rebalance the world economy; whether it will play its full part in the Copenhagen negotiations on climate change; and what its position may be on Iran. Imagine we were analyzing the consequences of a threat to China's stability and cohesion. And then be glad we are not.
None of this means that we should stop posing tough questions to China's leaders. It simply means that we should appreciate how their country looks to them from the inside. We may criticize the speed of political reform, and raise concerns about human rights and the rule of law. But we should at least understand that their political and economic endeavor is unique in human history. Its magnitude is beyond the comprehension of most Western leaders, and its complexity should be recognized.
Prior to 1949, China was a deeply riven and unequal society. There was a reason for the civil war and the multiple invasions of foreign powers. There was a reason for the upheaval of 1949. In the first 30 years came the completion of the revolution and the establishment of the People's Republic. But then came the Cultural Revolution.
It is difficult for us to grasp the pain of that period, when China closed down and engaged in a bizarre and cruel experiment that left scars, even to this day, on those who experienced it—including many in the present leadership. Talk to those who lived during that time, when reason was turned on its head, when survival depended on the whim of officialdom, and when all independent thought was snuffed out, and you will understand how momentous the change has been since then.
The opening up of China has its ups and downs. But over the past 25 years, the number of people below the World Bank poverty line has fallen by over 80%, GDP per head has more than doubled, and Chinese entrepreneurs are among the most innovative in the world.
China is now the world's largest market for automobile sales, but it is also investing heavily in green vehicles. It is the world's second largest market for wind turbines and the third largest in solar power. Over the next decade, it will almost double its energy output from renewable sources, its cities will change much of their lighting to LEDs, and it will aim to peak its emissions in 2030.
China's universities are forging partnerships with the best of their counterparts in the West. And China is turning out more science and engineering graduates than the whole of Europe put together.
There is a new cadre of people coming to the fore within government. Conversations with Chinese leaders today—at the provincial, as well as the central government level—are a world away from the stilted, pro forma exchanges I remember on my first visit 20 years ago.
However, one of the most interesting aspects of modern China is how the narrative of China, its history and its future, is being reframed. Listen to people in China today—and not only in government—and you can see that even amid the celebrations of the 60 years of the People's Republic, China is rediscovering its history and reorienting its future as a result.
Naturally, the 60 years of the Republic and what it has done are extolled. But increasingly, there is an interest in and reverence for China's ancient civilization as well as its post-1949 transformation.
Confucius, the marvels of the Tang dynasty, calligraphy, the beauty of traditional Chinese painting and literature—all of this infuses the speeches, commentary and discourse of contemporary Chinese life. Chinese films, art, fashion and pop music are thriving. There is a new Cultural Revolution taking place in 21st century China, and it is a lot healthier than the old.
This provides those of us outside China with an opportunity. How China changes will impact profoundly how we change. Our obligation is to treat China as a partner as we determine together the way the world will work in the future. If we treat China as our equal, China can be our economic, political and cultural ally. That is an opportunity that is worth effort.
A few weeks ago, when I was in Guizhou province outside Guiyang city, standing in a small village to see a pilot project in solar lighting, I reflected on what I had seen. I had seen the city center, with its fashion shops like Christian Dior and its bustling nightlife, but also housing tenements urgently in need of renovation. I had witnessed a stunning music and dance show celebrating the region's indigenous heritage. I met the Muslim governor. And in the village, I saw newer homes, but also many that were as poor as some in Africa.
As I walked around, the local people at first hung back. But then as I reached out, they reached back. Within minutes, we were taking photos and speaking freely. OK, it wasn't like my old constituency in Sedgefield in the northeast of England. But it wasn't North Korea either. The relationship between government and governed in China is changing, and for the better.
So when we reflect on China's last 60 years, reflect by all means on how far they have to go. But spare a thought for how far they have come. And then figure out how we can help.
Mr. Blair was Prime Minister of Great Britain from 1997-2007.
_________________________________________________

The world's largest country has a long way to go, but there's no question it's changing for the better.

Good to be here and look at it prosper .

It's all over Mao | The Australian