I Survived Communism. Now, Its Back, Veiled as Environmentalism

B00Mer
+2
#1 3 days ago
I Survived Communism. Now, It’s Back, Veiled as ‘Environmentalism’ 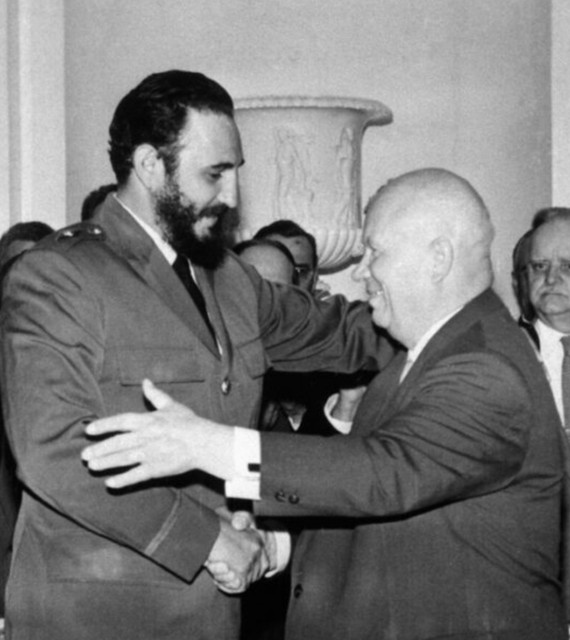 I Survived Communism. Now, Its Back, Veiled as Environmentalism


How else to explain the MASSIVE Soviet Russian irrigation schemes that DESTROYED THE ARAL SEA!!!!!!!!!!!!!!!!!!


Here is an article that LIE-berals will find awkward. With some comments of my own in brackets):

GUEST COLUMN: It's capitalism, not big government, that improves environment

The common refrain of climate-concerned Liberals, to justify massive government interference of commerce and wasteful environment subsidies and spending, is that the environment and the economy go together. Carbon taxes, stricter fuel regulations, restrictions on international trade  all these things, we are told, will bring both economic and environmental benefit.

The federal government recently announced its Low Carbon Economy Challenge. More than $500-million in corporate welfare and other spending was justified as part of a plan to ensure a safe climate, healthy environment, and prosperous future. When Liberals announce millions of dollars in unnecessary costs for taxpayers, consumers, and private industry, the country becomes richer and the environment becomes cleaner. Amazing!

(Is it not ODD that Wynne-bag Ontari-owe LIE-berals began their implementation of carbon credits by EXEMPTING the 150 biggest companies in Ontari-owe? Just as in Europe- a carbon tax is a job killer and the LIE-beral version which is so closely modelled on the European version- will result in the new tax being paid
ONLY by small biz and ordinary people! While tax revenue from carbon crap will be used to maintain the LIE-beral gravy train for their pals!)

There is, however, a major problem with the Liberal narrative. Its that in the past few centuries, mankind (or peoplekind, according to the Prime Minister) has become spectacularly richer while the environment has become far cleaner. This happened even before Justin Trudeau, Rachel Notley, and Kathleen Wynne arrived on the scene to carbon-tax-and-spend humanity into prosperity and cleanliness.

What is the source of the material prosperity and environmental cleanliness we enjoy today? The answer is capitalism, trade, and fossil fuels  not government control, taxes, and subsidized solar power. For example, cities were cleaned by the invention and widespread use of automobiles, which rid the streets of horses and manure that attracted flies and disease. The invention of refrigerators improved cleanliness by curtailing bacteria growth in food. The window screen  another product of private industry  keeps homes clean from insects.

And then theres soap. A couple centuries ago, soap was homemade, and involved boiling water mixed with ashes mixed with fat over an open fire for hours. Most people bathed only once monthly and rarely washed their hair. When they did wash, the soap left residue after being used. Today, thanks to profit-driven businesses, the quality of soap is much better and is affordable even for the poor  though not in socialist Venezuela, where people are dying because even some hospitals have no soap.

On a larger scale, the story is the same  capitalism cleans. In the 1980s, the Communist world suffered far worse pollution than the free world. The United Nations declared East Germany the most polluted country in Europe and Greenpeace said it was the most polluted in the world. According to a Fraser Institute study from 2014 examining more than 100 countries over the span of a decade, the most economically free countries experience much cleaner air quality than the countries with the least economic freedom.

Of course, government does have some responsibility to constrain pollution. Property rights and a justice system that protects people from damage to their person and property are important both for environmental protection and economic growth. But when government oversteps these boundaries with arbitrary and wasteful subsidies and regulation, the economy and environment both suffer.

(LIE-berals want to blame climate change on the waitress who drives her car home after finishing her late shift because she does not feel safe on the streets late at night thanks to LIE-beral judges and their catch and release handling of career criminals!)

(LIE-berals want to punish people who regularly drive because they live in places not well served by public transit! LIE-berals do not care that you cannot find a decent place to live near your work because the available options either cost too much since you cannot afford to bid against civil service union Hogs or because you do not wish to live in or near TCHC slum landlords with their collection of tenant pimps, criminals, prostitutes and drug addicts!)

(LIE-berals blame the waitress while IGNORING the masses of gravy train riding civil service union Hogs ripping through the countryside on atv`s and snowmobiles and Sea-doos! And LIE-berals blame car drivers for pollution while ignoring the electrically powered compressed air bubble systems that run 6 months per year and prevent ice from forming around the valuable cedar docks of Hog cottagers!)

(LIE-berals IGNORE the evidence that CONDEMNS airplanes for providing the MAJOR CONTRIBUTION to global warming- while also ignoring the reality that it is overpaid Hogs who do most of the flying!)

(LIE-berals do not to discuss the fact that air quality across the planet IMPROVED in the year after the 9/11 terror attack when 25 percent of the world airline fleet was grounded! LIE-berals also ignore the compelling evidence that contrails those white lines of water vapour produced by high flying jets are the LEADING CAUSE of global warming!)

(Yes- LIE-berals refuse to discuss the truth- that the quickest way to reverse global warming is to cut back on gravy for Hogs! WE know that those with the biggest carbon foot print are also those with the highest wages and Hogs consistently get at least ONE THIRD HIGHER PAY than other Cdns! And of course Hog pension are so lavish that it is ILLEGAL for citizens in private companies to get such a rate of return on pension investment as Hogs are entitled to!)

Across countries and over time, the consequences of widespread poverty were conquered only when and where societies embraced capitalism and trade. Boudreaux therefore concluded that the worst environmental calamity is the absence of capitalism. The evidence shows this to apply to climate calamity, too.

According to environmentalist Bjorn Lomborg, the death risk from climate-related disaster has plummeted 99% in the past century. Surely these happy results cannot be attributed to the climate-driven economic interventions enacted by modern politicians.

Matthew Lau is an economics writer in Toronto and a contributor to Canadians for Affordable Energy.

(The LIE-beral implementation of mouldy green renewable energy projects in Ontari-owe DID NOT lead to cleaner air here- for the simple reason that mouldy green energy is so unreliable that natural gas fired electrical generators MUST be kept fully fired up- 24/7- and ready to take over the very instant the sun stops shining or the wind fails to blow as expected!)

(LIE-berals claim they are helping the environment by converting 2 coal fired plants to burn natural gas instead- and one must agree that it is a help- though it is A DROP IN THE ATMOSPHERIC BUCKET since natural gas is still a fossil fuel- though cleaner than coal!!!!!!)

(If LIE-berals were animated by climate concern rather than the pursuit of gravy- then WHY did they buy into a Yankee electrical generating company that USES COAL generators?)

(If LIE-berals were truly the environmentalists and spound money managers they CLAIM to be, then why are they DUMPING water- meaning diverting water AWAY from hydro dams im order to make room for their mouldy green and very costly wind and solar power?)

(LIE-beral environmental policy is a TOTAL FAILURE- that only cleans cash from wallets and leaves the dirt in the air!)

3 days ago
If environmentalism were real we'd be building nuclear and nothing but nuclear.

If environmentalism were real we'd be building nuclear and nothing but nuclear.


and should have specified construction methods that minimized punctures in the vapour barrier for things like electrical outlets!!!!!!!!

3 days ago
Double down on stupid!

Double down on stupid!

Double down on stupid!