Seagull flies away with a dog 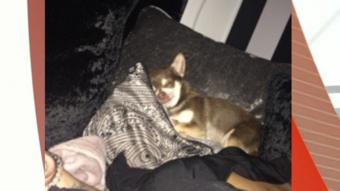 A seagull has seized and flown off with a family's pet Chihuahua, according to its owners.

Becca Louise Hill said a gull swooped down and grabbed Gizmo "by the scruff of his neck" in Paignton, Devon. Her partner tried to grab the dog's legs to stop him being taken away.

She said: "A seagull swooped down and grabbed him by the scruff of his neck.

"My partner tried to grab his legs, but he was not tall enough and... the seagull flew away."

She said there had been no sightings of Gizmo since.

She said she would keep "looking every day" until he was found.

Re: Seagull flies away with a dog

Jul 23rd, 2019
It's kind of a common occurrence over here although it's usually eagles and hawks, not seagulls.

Re: Seagull flies away with a dog

I can see why they didn't include the dawg's height and width in the report.

I guess when they find him that will have changed, and he will be found to be only about one or two millimeters tall and several feet wide, but he will still weigh the same...clever!
I wonder how that will effect all the facial recognition cameras.