EDMONTON - The only explanation seems to be that when Jason Kenney, the federal immigration minister, hit the button on his personal email account, he accidentally hit “reply all.”

Why else would he declare to the world in an email that he thinks Alberta’s deputy premier, Thomas Lukaszuk, is a “complete and utter asshole”?

Kenney wrote the invective last Wednesday at 5:02 p.m. in response to an email sent from the office of MP Blaine Calkins, chairman of the federal Conservatives Alberta caucus, who wanted to know if Kenney and other MPs from Alberta would meet with Lukaszuk.

“Honourable Thomas Lukaszuk, deputy premier of Alberta will be in Ottawa on Thursday, June 21st, 2012 and is requesting a lunch or dinner with caucus,” says the email written by Calkins’ legislative assistant at 4:57 p.m. “Mr. Calkins will not be able to host this event as he has prior commitments, but would like to see if there is any caucus member who would be willing to host this event for the deputy premier.”

Kenney shot back a response just five minutes later, but instead of sending it only to Calkins’ office, he inadvertently sent it to everyone in the 26-member federal Alberta caucus, plus assistants: “I say a definite ‘no’ to Lukaszyk. I don’t think it makes sense to create a precedent to do a special caucus meeting for every visiting minister from the provincial government. Plus he is a complete and utter asshole.”

It is an email that is making the rounds of political circles as a testament to just how bad things have become, on a personal level, between Alberta Conservatives, provincial and federal, who most recently tussled in the Alberta election when a number of the more right-wing federal MPs supported the Wildrose party in defiance of the Progressive Conservatives.

Most of all, the email has created a public-relations nightmare for Kenney and the prime minister’s office which have descended into the no-comment bunker awaiting the all clear.

The only comment from Kenney on Monday came via his press secretary, Alexis Pavlich: “We do not comment on private communications.”

The first part of Kenney’s email actually has a valid argument. Ottawa is facing something of an invasion of government politicians from Alberta trying to build bridges and patch over differences with the federal government. Premier Alison Redford has paid a visit, so too the environment minister and the minister of intergovernmental relations. Finance Minister Doug Horner is in Ottawa the first part of this week and Lukaszuk will be there the latter part.

Kenney has a point when he says if the MPs say yes to a formal gathering for one provincial minister, they’d have to say yes to all of them.

But resorting to a personal insult against Lukaszuk undermines the sincerity of Kenney’s own argument. Is he saying “no” to Lukaszuk as a matter of principle or of pettiness?

And why does Kenney harbour such a low opinion of Alberta’s deputy premier?

The answer to that might lie in Lukaszuk’s constant lobbying, and occasional criticism, of federal immigration policy last year when he was Alberta’s employment minister. Lukaszuk wanted Ottawa to open the door to allow more immigrants to come to Alberta to alleviate the province’s shortage of skilled trades.

He decried Kenney’s reliance on temporary foreign workers as “costly,” “cumbersome” and “unfortunate.” That the two bumped heads was no secret but Lukaszuk said he had no idea Kenney was so thin skinned or held him in such contempt.

“My feelings towards him are actually rather positive,” Lukaszuk said Monday when told about Kenney’s email. “I have nothing negative to say about him.”

Lukaszuk stuck to the high road and would only characterize Kenney’s email as “an unfortunate choice of words” and joked that “we’re probably not going for a latte any time soon.” He said he would not be asking Kenney for an explanation or an apology and won’t be spending any time worrying about it.

Which is what you would expect him to say.

The fact is the Alberta government is worried about its relationship with its federal cousins. Despite the fact Stephen Harper is onside with the Alberta government’s aspirations to ship more bitumen from the oilsands to Asia and the United States, many of his federal caucus members from Alberta would dearly love it if the Alberta government was run by the Wildrose under Danielle Smith, not the Progressive Conservatives under the more moderate Redford. It doesn’t seem to matter that the PCs won a decisive victory in April’s election.

More than a few Alberta MPs have their noses out of joint that Alberta feels the need to open what amounts to foreign trade office in our nation’s capital. But reading Kenney’s email puts things in sharper perspective.

It doesn’t really matter that he intended the email to be a “private communication.” That somebody so senior in the federal government from Alberta should harbour such contempt for the province’s deputy premier calls into question just how Kenney and others in the federal caucus are doing their jobs and who actually represents Alberta’s interests in Ottawa.

Who is Jason Kenny?

Known for his inability to use email.

Known for his inability to use email.


Oh I think many have hit the reply all. Big Oops.

Oh I think many have hit the reply all. Big Oops.

When one is referring to someone as an asshole in an email, one should take extra precautions. Just saying.

When one is referring to someone as an asshole in an email, one should take extra precautions. Just saying.

Jun 19th, 2012
Typical Kenny. Unfortunately outbursts of this sort are not at all out of character. When he was a spokesperson for the Canadian Taxpayers' Association one of his favourite monthly topics was bashing "greedy" teachers for their "high" wages. I finally got tired of it and wrote him a personal letter (yes letter) pointing out that the average Alberta teacher had one-third of his or her paycheque deducted before it reached the bank. I'm not sure whether I managed to get through to him or not, but the articles stopped.

Jun 20th, 2012
This is just the beginning. The current government got it majority and now they
can do what they like and say what they like. The problem is when you do that
you alienate people. people like Kenney actually devalue the brand as it were.
We have them calling people names and pushing through pieces of legislation
without actually go through what's in it. As soon as any Prime Minister thinks
he is now the King it comes apart pretty fast. Dief the Chief did that and so did
a few other like Brian Mulroney and poof, out of office so fast it made their heads
spin.

Jun 20th, 2012
This government's divisive attitude is going to cost them some Albertan votes.

It's time to rebuild key relationship

It's just Jason Kenney's opinion, and as the saying goes, everybody has one.

But the federal immigration minister's dim view of Alberta deputy premier Thomas Lukaszuk, as evidenced in a private email that went public in the Journal on Tuesday, speaks also to the deterioration of a political alliance that ought to have much value for Alberta and its electorate.

Even before Kenney tossed the headline-grabbing A-bomb in Lukaszuk's direction, he wrote that it didn't make sense for the Alberta Conservative caucus in Ottawa to create a precedent by convening a special meeting with Lukaszuk, who will be in the nation's capital on Thursday.

While the final profane line in Kenney's email speaks to a complete and utter lack of professionalism, far more dangerous is his counselling of antipathy toward the federal Conservatives' provincial cousins.

Lukaszuk wasn't asking for much; he wanted to have a lunch or dinner with his federal brethren, which seems a reasonable request, particularly from a deputy premier.

There is, after all, value in effective, open communication between all levels of government, regardless of party affiliation. We may well be witnessing evidence of that in Monday's announcement of a big-city charter agreement signed by the provincial government and the civic administrations in Calgary and Edmonton.

Mayor Stephen Mandel seemed encouraged by the development, calling it a "bellwether day."
But on the flip side of that coin, in the recent and distant past Albertans have felt the effects of dysfunctional relationships between provincial Conservatives and federal Liberals. Pierre Trudeau did Alberta no favours with the National Energy Program back in the 1980s, for instance. And there was no love lost between Ralph Klein's administration and that of Jean Chrétien, stemming in part from their opposing viewpoints on the Kyoto accord.

On the surface, Kenney and Lukaszuk are ostensibly teammates, both flying the Conservative banner. But Kenney expressed public support for the Wildrose party during the provincial election and his allegiance was shared by others in what is now a 25-member Alberta Conservative caucus in Ottawa. So there is repair work to be done by Premier Alison Redford and her ministers, Lukaszuk included.

But this bridge has to be rebuilt from both sides of the widening chasm and Kenney has done a disservice to his party and the province he also represents by offering resistance to an outreach from a high-ranking Alberta minister.

The apology Kenney made to Lukaszuk on Tuesday is a good start. But he should also take remedial lessons in email protocol and accept Lukaszuk's invitation to lunch or dinner. It would do Kenney a world of good to partake of a little humble pie.

It's time to rebuild key relationship 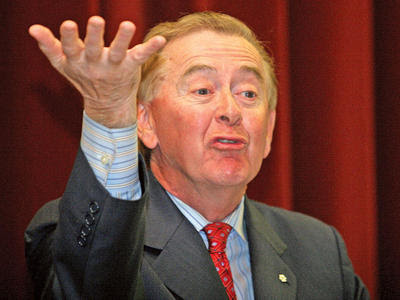