Blackleaf
#1 Jun 16th, 2007
The Trooping of the Colour takes place today for the Queen's official birthday, the event which sees British soldiers from various regiments marching around Horse Guards parade in all their different coloured uniforms. And, as usual, thousands of tourists will be there to watch.....

Queen celebrates with Trooping of the Colour

The Queen celebrates her official birthday today with the Trooping the Colour parade.

More than 1,100 British soldiers will take part in the ceremony


More than 1,100 soldiers will take part in the traditional display of pomp and pageantry.

The Queen and the Duke of Edinburgh will ride in the 1842 ivory mounted phaeton carriage from Buckingham Palace along The Mall to Horse Guards Parade in central London.

Prince William, likely to be in military uniform, will ride in a barouche with his stepmother the Duchess of Cornwall and Vice Admiral Timothy Laurence.

The procession will be accompanied by a Sovereign's Escort of the Household Cavalry, made up of Life Guards and Blues and Royals, in their silver and gold breastplates and plumed helmets.

The annual Trooping the Colour, which sees British soldiers marching around Horse Guards Parade in central London in uniforms of various colours, is a good day out for the tourists


William and younger brother Prince Harry, who is not at the event today, are both cornets in the Blues and Royals.

Four of the five Foot Guards regiments of the Household Division - the Welsh Guards, Grenadier Guards, Scots Guards and the Coldstream Guards - will march in the parade wearing bearskin hats and red tunics.

The Massed Bands and the Mounted Bands of the Household Cavalry will also take part, as will the King's Troop Royal Horse Artillery.

The King's Troop's commanding officer is Major Erica Bridge - the first woman to hold the post for the regiment.

The Colour being paraded on Horse Guards this year is the flag of the Number 7 Company Coldstream Guards.

After the Queen takes the salute on Horse Guards, the royals will head back to Buckingham Palace to gather on the balcony. Trooping the Colour originated from traditional preparations for the battle.

Colours, or flags, were carried, or 'trooped', down the rank so that it could be seen and recognised by the soldiers.

In the 18th century, guards from the Royal palaces assembled daily on Horse Guards to 'troop the colours', and in 1748 it was announced that the parade would also mark the Sovereign's official birthday.

The Queen's actual birthday was on April 21, when she turned 81. 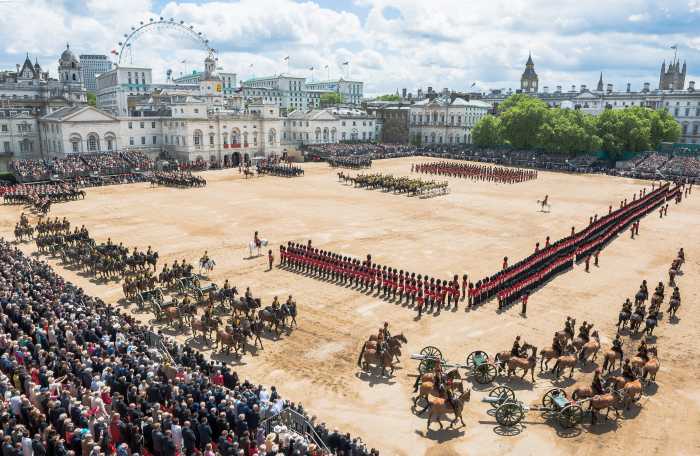 Trooping the Colour is a military pageant or ceremony performed by regiments of the British Army . It has been a tradition of British infantry regiments for centuries and it was first performed during the reign of Charles II .

On battlefields, a regiment's colours , or flags, were used as rallying points. Consequently, regiments would have their Ensigns slowly march with their colours between the soldiers' ranks so that they would recognise what their regiments' colours looked like.

The importance of the colours was not confined to control during battle. They represented a regiment's direct link and service to the sovereign, as well as to the fallen soldiers and officers of that regiment. Its loss, or the capture of an enemy colour, were respectively considered the greatest shame, or the greatest glory available on a battlefield. As such, regimental colours are venerated and paid the highest compliments by officers and soldiers of all ranks, second only to the Sovereign.

Only battalions of Infantry Regiments of the Line carry Colours, the Royal Artillery's colours for example, are their guns. Rifle Regiments did not form a Line and thus never carried Colours. Their Battle honours are carried on their drums.

Trooping the Colours is an old ceremony whereby the battalion would fall in by Companies and the colour-party would "troop" or march the Colours through the ranks so that every man would see that the Colours were intact. This was done before and after every battle. This ceremony has been retained through time and is today largely ceremonial.

In the United Kingdom, Trooping the Colour has become closely identified with the Queen's Official Birthday , and is also known as the Queen's Birthday Parade . It has marked the official birthday of the Sovereign since 1748, and has occurred annually since 1820 (except in bad weather, periods of mourning and other exceptional circumstances). Edward VII moved Trooping the Colour to its June date, because of the vagaries of British weather.

Trooping the Colour allows the Household Division - Foot Guards and Household Cavalry - and King's Troop to pay a personal tribute to the Sovereign with great pomp and pageantry. Crowds at Buckingham Palace , around the Victoria Memorial and lining The Mall listen to the military bands before and after the ceremony. Events at Buckingham Palace after the Queen's return include another march past, a 41-gun salute in the adjacent Green Park , and a flypast by the Royal Air Force . This is followed by the usual daily Changing of the Guard .

The Queen has attended Trooping the Colour in every year of her reign except when prevented by a rail strike in 1955. She was once fired at on her way to the ceremony by a lone assailant. Her 80th birthday in 2006 was marked by an extended flypast and a feu de joie .