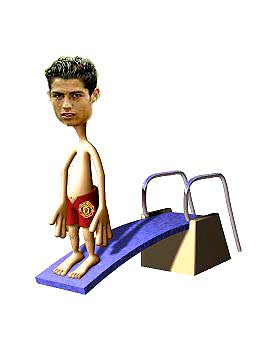 But Manchester United supporters will buck the trend - by going soft on conmen.

That's no surprise as Old Trafford winger Cristiano Ronaldo tops the list of shame after his World Cup whining, winking and diving.

The survey shows that one in three fans will target known bad-boys, even if the players behave well on the day.

And a third of supporters claim cheats deter them from going to games.

But just 21 per cent of United fans will pick on cheats, compared to 52 per cent at survey-topping Portsmouth.

Only six per cent will let their own players get away with cheating.

And the new research by Virgin Money, which also monitors ticket prices through its Football Fans Inflation Index, found that diving is the most hated form of cheating.

Some 59 per cent of followers claim they will barrack dirty tricks from ANYONE, whatever the player's reputation.

Supporters are angry, too, at dissent towards officials and players waving imaginary cards or pleading with referees to punish opponents.

That might seem a bit rich, given the amount of abuse fans give referees!

The study - based on 2,074 supporters quizzed online - shows youngsters are more lenient towards cheating.

Teenagers are less likely to boycott matches because of dirty tricks.

And for those aged 16 to 19 as many as 16 per cent - twice the average - will accept cheating from their own side.

"Fans are gradually becoming fed up.

"Fans pay a lot of money and want to see good football without the unconvincing play-acting and cheating that is increasingly getting served up.

"Plenty of players and managers have said theyve had enough of cheating and fans are right behind them."

GROUNDS MOST HOSTILE TO CHEATS

Percentage of fans who will target cheats directly from stands this season, regardless of behaviour on the day

Ground % of fans who will target cheats directly from stands this season, regardless of behaviour on the day.

HOW FANS RATE EACH TYPES OF CHEATING

Aug 15th, 2006
I love football (soccer in Canada). I play on a team, but I never dive or cheat. I just love to play the game. I watched the world cup and hated most of it. Too much diving. It's amazing how a player can look like he's in all this pain, then pour some water on his ankle and be back in the game, good as new. Was that magic water they poured on him?