Evidence of excavations have been found by National Trust staff at Steel Rigg and Peel Crags on the central section of the world heritage site.

The damage, thought to be from "nighthawking" - the illegal use of metal detectors - has been condemned by police, English Heritage, the National Trust and Northumberland National Park Authority.

Excavations have been found by National Trust staff at Steel Rigg, above, and Peel Crags

Illegal digging on Hadrian's Wall in Northumberland has been branded a worrying "heritage crime".

Evidence of excavations have been found by National Trust staff at Steel Rigg and Peel Crags on the central section of the world heritage site.

The damage, thought to be from "nighthawking" - the illegal use of metal detectors - has been condemned by police, English Heritage, the National Trust and Northumberland National Park Authority.

At the nearby site of Vindolanda Roman fort, where annual organised excavations have produced remarkable finds, director of the Vindolanda Trust Patricia Birley said: "The trust deplores the illegal use of metal detecting.

"It is a destructive activity that cheats ordinary interested people and our national heritage by stripping away the full archaeological value of objects and their contexts that only proper archaeological investigation can achieve."

It has also alarmed Nick Hodgson, project manager of the WallQuest community archaeology project by Tyne Wear Archives and Museums which has been investigating sites along the Wall from South Shields to the Tyne Valley.

TWAM is also running the Wall Community Champions scheme by which volunteers patrol and inspect stretches of the monument for signs of damage.

Mr Hodgson said: "It is going to damage the archaeology. As they are digging through archaeology layers we are losing the knowledge that the layers may contain."

The Wall sites are legally protected as scheduled ancient monuments, and it is a criminal offence to use a metal detecting equipment without authorisation from English Heritage.

Mark Harrison, English Heritage national crime advisor said: "The practice of nighthawking, particularly from such important sites as Hadrian's Wall, is an issue that we take very seriously.

"We recognise that the majority of the metal detecting community comply with the laws and regulations relating to the discovery and recovery of objects from the land, but just as it is against the law to break into someone's house and steal their possessions, so it is illegal to damage land and steal valuable historical artefacts.

Hadrian's Wall is around 70 miles long and was built between 122 and 128, during the reign of Emperor Hadrian 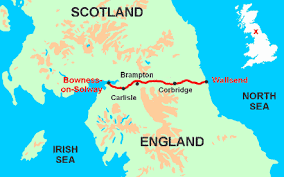 Eric Wilton is National Trust countryside manager for Hadrian's Wall Country Group, which looks after over six miles of the Wall from Housesteads to Cawfields Quarry monitoring over 700 archaeological features across the site.

He said: "This is extremely damaging and it is a heritage crime. It is disappointing at a time when archaeologists and legitimate metal detectorists are working together more closely that this incident has occurred.

"The National Trust wants the public to enjoy its many and varied sites, such as these, but cannot tolerate illegal metal detecting that harms the appreciation of our collective heritage."

"We want people to be aware of what has happened and to contact us if they see anything suspicious."

Chris Jones, historic environment officer for Northumberland National Park, said: "The illegal removal of archaeological material is a serious offence. Such criminality has a damaging effect on people's ability to understand and enjoy the cultural heritage of the national park.

West Tynedale Neighbourhood police inspector Kevin Oates said: "Northumbria Police are committed to investigating these issues. Any perpetrators can be expected to be prosecuted."