England destroyed the West Indies at Lord's yesterday by a maximum 10 wickets, taking only three days (out of a maximum of five) to do so in this First Test.

And it was a brilliant England debut for Graham Onions.

The right-arm medium-fast bowler, who plays for English champions Durham, took SEVEN West Indies wickets in his first ever match for England.

He took 5-38 in the First Innings, as the Windies were bowled out for 152, then took 2-64 in the Second Innings as the Windies posted a total of 256. At one stage he took four wickets in just SEVEN balls - what you could call a string of onions.

The West Indies First Innings total (152) wasn't enough for them to avoid the follow-on - a situation where they have to bat again for the second successive time to start the Second Innings rather than England batting again as it usually is when teams bat consecutively (they had to be at least within 200 runs of England but they trailed by 225) - so they batted first in the Second Innings.

That left England, who scored 377 in the First Innings, needing just 32 runs in the Second Innings to win, which they got effortlessly.

This was also Andy Flower's first Test as the new England coach. 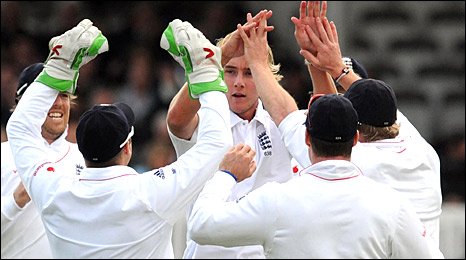 England wrapped up an emphatic 10-wicket victory over the West Indies inside three days at Lord's to win the opening Test of a series for the first time in 15 attempts.

Andrew Strauss's side, seeking to make a strong start to their Ashes summer, were frustrated by an impressive 143-run stand between Brendan Nash and Denesh Ramdin, but Graeme Swann and Stuart Broad teamed up to dismiss the tourists for 256 in the Second Innings.

It was the first time in seven matches that England had taken 20 wickets in a match - the last occasion coming in the fourth Test win over South Africa in August of last year.

And another one: Graeme Swann celebrates the wicket of Sulieman Benn

Following a one-hour morning rain delay, the visitors had been reduced to 80-5 in their second innings, still needing a further 145 runs to make England's openers strap on their pads one more time.

But Ramdin (61) and Nash (81), both centurions in the Test series between these teams in the Caribbean, applied themselves well, before finally falling to an impressively hostile Broad.

Still only 22, Broad was quick to realise the short-pitched ball had become more of a threat than fuller-pitched deliveries.


The resourcefulness of man of the match Swann, meanwhile, allowed him to match Broad's three-wicket haul - by removing Shivnarine Chanderpaul cheaply for the second time in the match before bamboozling two tail-enders.

Coming to get you: Fidel Edwards, the West Indies pace bowler, closed in on Cook shortly after lunch


England coasted home to give Andy Flower a win in his first Test since becoming team director on a permanent basis, and now anything other than a remarkable Windies fightback at Chester-le-Street next week will ensure the Wisden Trophy returns to English hands only two months after they relinquished it in Trinidad.

The early finish proved a blow to the coffers of both the MCC and the England and Wales Cricket Board (ECB) as nearly 20,000 ticket-holders for Saturday will have to be refunded. 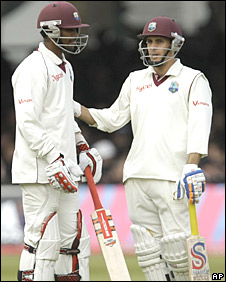 Ramdin and Nash played with authority during their stand


That, combined with the poor attendances for the first two days, means this match will be no cash-cow for the ECB - though they have the consolation of staging international cricket on an almost non-stop basis until 20 September.

With only one hour's play available before lunch at the regular time of 1300 BST, it looked like Devon Smith and Lendl Simmons might get West Indies to the interval without England adding to the two wickets they had lost overnight.

His second over contained an innocuous slider down the leg-side, but Simmons lazily flicked at it, and Cook - crucially standing a few yards closer to the action than a regulation square-leg - snapped up a catch.

Strauss chose this as his moment to introduce Swann, who immediately removed Chanderpaul. Starting the match ranked the best batsman in Test cricket, the veteran left-hander lasted a total of six balls across both his innings - here squeezing a catch off bat and pad to silly point.

Smith then fell in the 40s for the second time in the match when a swinging delivery from Onions, though not quite a yorker, proved testing enough to escape his defences and scuttle into the stumps.

Nash took a long while to settle. Missed on nought in the slips by Swann off James Anderson, he might have fallen lbw to Onions on five.

But after Ramdin started as the main aggressor with some confident pull shots, Nash too began to exploit the attacking fields to help himself to some off-side boundaries.

Wicketkeeper Ramdin drove and cut Onions for consecutive boundaries for the 100-run partnership, but next ball, having made 46, he presented the bowler with a very acceptable caught-and-bowled opportunity - a chance that went begging.

Ramdin soon reached his half century, Nash joining him on that landmark with a crisp cover-drive off Swann - and suddenly things looked a tiny bit bleak for England.

Strauss had employed numerous bowling changes, and now employed a relatively fresh Broad to begin a spell just before tea from the Pavilion End. And it was he who finally found a way through Ramdin, with a ball that jagged down the hill.

The final session opened with a couple of meaty drives from Jerome Taylor before he tried to heave Swann across the line and was lbw, then Sulieman Benn was promptly bowled by the off-spinner.

Broad was bowling with great venom and accuracy, and Fidel Edwards lasted just three balls before splicing a vicious throat ball to Tim Bresnan, who took a good catch in the gully.

Nash was struggling to farm the strike, and he was the last man out, upper-cutting Broad to Alastair Cook at third man.

In glorious evening sunshine, Cook and Strauss had few problems in reaching their minuscule target.

Cook hooked Taylor for a sumptuous boundary and drove him for another, before Strauss's cover-drive off Edwards finished off proceedings.

One up: Andrew Strauss and Alastair Cook celebrate England's 10-wicket victory at Lord's

High five: Stuart Broad celebrates as England close in on their emphatic win

And another one: Graeme Swann celebrates the wicket of Sulieman Benn

Off his head: James Anderson receives treatment after Chris Gayle delivered a bouncer which struck him on the helmet

Golden Graeme: Swann acknowledges the crowd after hitting the first Test half-century of his career

Downcast: a disappinted Ramnaresh Sarwan (left) looks at the ball after being bowled by England's James Anderson